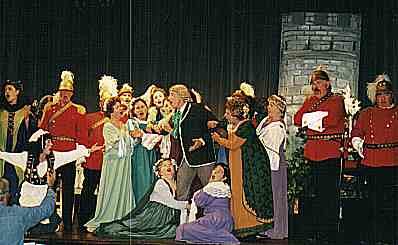 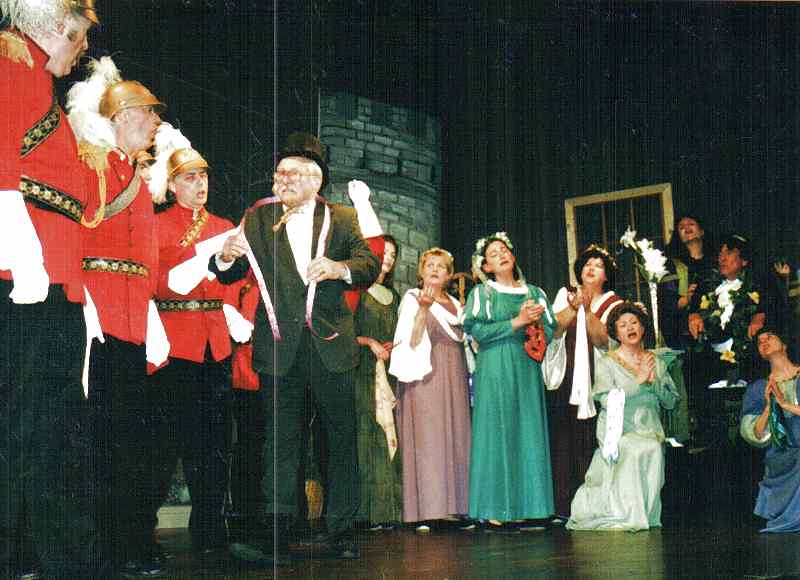 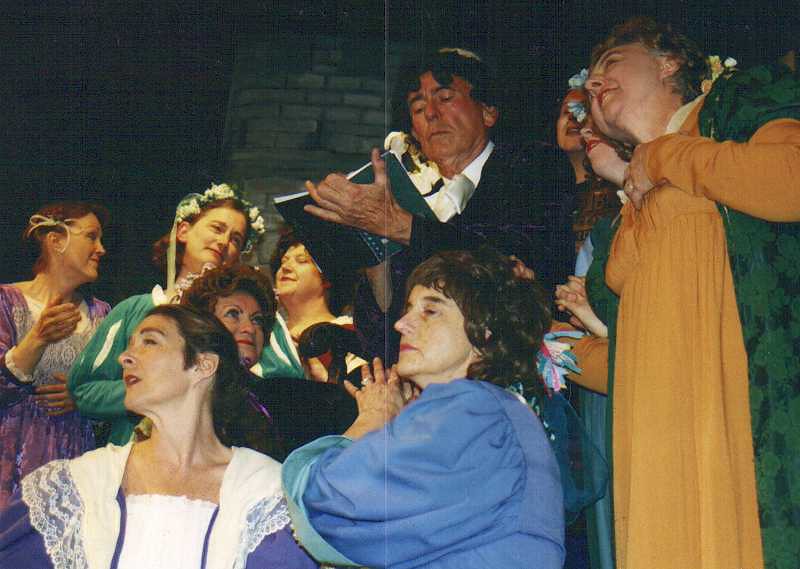 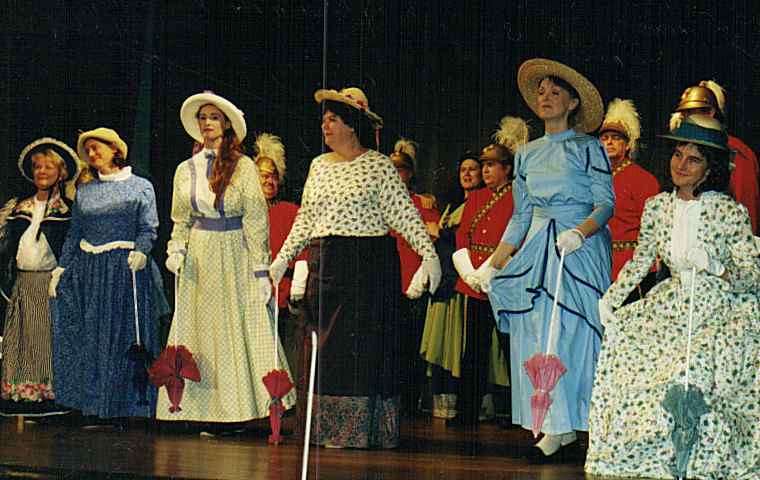 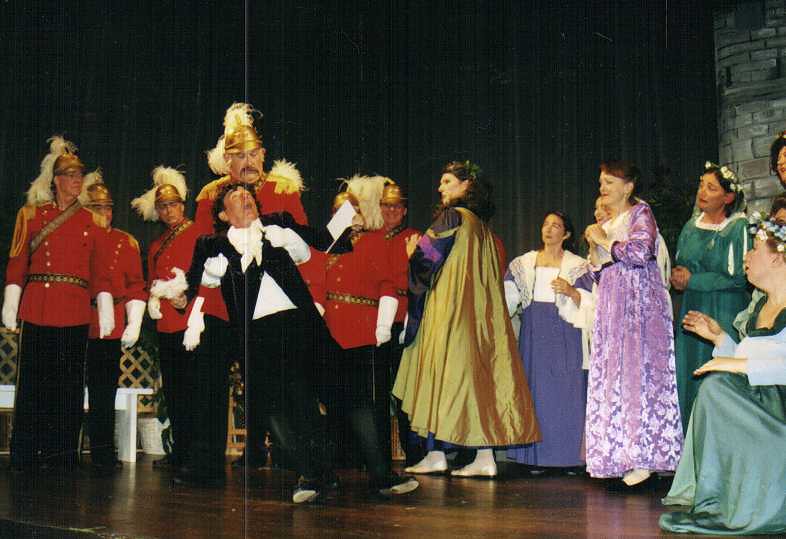 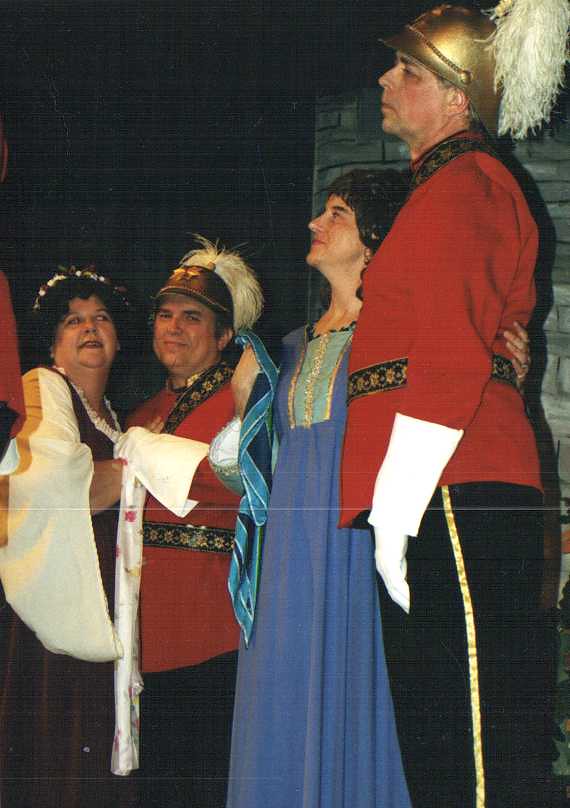 THERE is satire in the very name of this opera. The craze for æstheticism against which it was directed must have placed a strain on the patience of so brilliant an exponent of British commonsense as Sir William Gilbert.

Shortly before the play opens, twenty of the maidens of the village adjoining Castle Bunthorne had fallen in love with the officers of the 35th Heavy Dragoons. But when Reginald Bunthorne, a fleshly poet and a devotee of the æsthetic cult, arrived at the castle, they had fallen out of love with their Dragoons and united with Lady Jane (of uncertain age) in worshipping him. When the curtain rises the “twenty love-sick maidens” are lamenting that Bunthorne is “ice-insensible.” Lady Jane tells them that he loves Patience, the village milkmaid – who is seen regarding them with pity. Lady Angela tells Patience that if she has never loved she can never have known true happiness. Patience replies that “the truly happy always seem to have so much on their minds,” and “never seem quite well.” Lady Jane explains that it is “Not indigestion, but æsthetic transfiguration.” Patience informs the ladies that the 35th Dragoon Guards have arrived. Lady Ella declares, ” We care nothing for Dragoon Guards.” “But,” exclaims Patience, “You were all engaged to them.” “Our minds have been etherealised, our perceptions exalted,” answers Lady Angela, who calls on the others to lift up their voices in morning carol to “Our Reginald.”

The 35th Dragoons arrive and the Colonel gives us in song :

“A receipt for that popular mystery
Known to the world as a Heavy Dragoon.”

One of them who arrives later looks miserable, but declares “I’m as cheerful as a poor devil can be, who has the misfortune to be a Duke with a thousand a day.” His wretchedness is not relieved by the entrance of Bunthorne, followed by the maidens, who ignore the Dragoons. The Poet pretends to be absorbed in the composition of a poem, but he slyly observes, “I hear plainly all they say, twenty love-sick maidens they.” Lady Jane explains to the soldiers that Bunthorne has idealised them. Bunthorne meanwhile is to be seen writhing in the throes of composition. “Finished!” he exclaims and faints in arms of the Colonel. When he recovers, the love-sick maidens entreat him to read the poem. “Shall I?” he asks. Fiercely the Dragoons shout “No!” but bidding the ladies to “Cling passionately to one another,” he recites “Oh, Hollow! Hollow! Hollow!” When the Colonel reminds the ladies that they are engaged to the Dragoons, Lady Saphir says, “It can never be. You are not Empyrean,” while Lady Jane sneers at the crudity of their red and yellow uniforms. The Dragoons resent this “insult” to a uniform which has been “as successful in the courts of Venus as in the field of Mars,” and lament that “the peripatetics of long-haired æsthetics” should have captured the ladies’ fancy. Angrily they return to their camp.

Bunthorne, left “alone and unobserved,” confesses to being an “æsthetic sham.” “In short,” he says, “my mediævalism’s affection, born of a morbid love of admiration.” Then Patience enters, and he makes love to her. She repulses him, and tragically he bids her farewell. Lady Angela implores her to “Try, try, try to love,” She dilates upon the “Ennobling and unselfish passion” until Patience declares, “I won’t go to bed until I’m head over ears in love with somebody.” Patience soliloquises, “I had no idea love was a duty. No wonder they all look so unhappy. I’ll go at once and fall in love with -” but stops, startled by a figure almost as grotesque as Bunthorne, and exclaims, “A stranger!” The stranger is Archibald Grosvenor, an idyllic poet, who plunges boldly into a declaration of love with his “Prithee pretty maiden, will you marry me.” Patience replies, “I do not know you and therefore must decline.” He reveals that he was her sweetheart in childhood’s days. Grosvenor begs Patience imagine “The horror of his situation, gifted with unrivalled beauty, and madly loved at first sight by every woman he meets.” When Patience enquires why he does not disfigure himself to escape such persecution, he replies, ”These gifts were given to me for the enjoyment and delectation of my fellow creatures. I am a trustee for beauty.” Grosvenor and Patience plight their troth, but as she remembers that love must be unselfish, and that Grosvenor is so beautiful that there can be no unselfishness in loving him, they bid each other “Farewell.” Just as they are parting it occurs to Patience that it cannot be selfish for Grosvenor to love her, and he promises, “I’ll go on adoring.”

Bunthorne, crowned and garlanded with roses, returns accompanied by his solicitor and the ladies. The Dragoons arrive also, and ask Bunthorne why he should be so arrayed. He explains that, heart-broken by Patience’s rejection, and on the advice of his solicitor, he has put himself up to be raffled for by his admirers. The Dragoons make a fruitless apeal to the ladies in a song by the Duke. The drawing is about to take place when Patience enters, craves Bunthorne’s pardon, and offers to be his bride. When Bunthorne rejoices that this is due to the fact that she loves him fondly, Patience tells him that it is because “A maiden who devotes herself to loving you, is prompted by no selfish view.”

This scene leads to a temporary reconciliation between the Dragoons and the ladies, who embrace each other and declare that “Never, oh never, this heart will range from that old, old love again.” Then Grosvenor enters. He walks slowly, engrossed in reading. The ladies are strangely fascinated by him and gradually withdraw from the arms of their martial admirers. Lady Angela asks:

“But who is this, whose god-like grace
Proclaims he comes of noble race.”

Grosvenor replies : “I’m a broken-hearted troubadour………I am æsthetic and poetic.” With one voice the ladies cry “Then we love you,” and leaving their Dragoons they kneel round Grosvenor, arousing the fury of Bunthorne and the horror not only of the Dragoons, but of Grosvenor himself, who declares that “Again my cursed comeliness spreads hopeless anguish and distress.”

The curtain falls on this scene, and when it rises again Lady Jane is discovered soliloquising upon the fickle crew who have deserted Bunthorne and sworn allegiance to Grosvenor. She alone is faithful to Bunthorne. Grosvenor enters, followed by the twenty love-sick maidens, pleading for “A gentle smile.” He reads them two decalets, and wearying of their worship, he tells them that his heart is fixed elsewhere, and bids them remember the fable of the magnet and the churn.

Bunthorne and Lady Jane return. The poet is indignant that Grosvenor has cut him out. Lady Jane’s assures him that she is still faithful, but promises to help him to vanquish his rival, and to achieve this purpose they concert a plan.

Then the Duke, the Colonel and the Major appear. They have discarded their uniforms and adopted an æsthetic dress and make-up, and they practise the attitudes which they imagine will appeal to the ladies. When two of these appear, it is evident that the plan is succeeding, for Lady Angela exclaims, “See! The immortal fire has descended upon them.” The officers explain they are doing this at some personal inconvenience to show their devotion, and hope that it is not without effect. They are assured that their conversion to the æsthetic art in its highest development has touched the ladies deeply.

In due course the officers and ladies disappear and give place to Grosvenor. Looking at his reflection in a hand mirror, he declares, “Ah! I am a veritable Narcissus.” Bunthorne now wanders on, talking to himself, and declaring that he cannot live without admiration. He accuses Grosvenor of monopolising the attentions of the young ladies. Grosvenor assures him that they are the plague of his life, and asks how he can escape from his predicament. Bunthorne orders him completely to change his appearance, so as to appear absolutely common-place. At first Grosvenor declines, but when Bunthorne threatens to curse him., he yields cheerfully, and Bunthorne rejoices in the prospect that :-

“When I go out of door
Of damozels a score,
All sighing and burning,
And clinging and yearning
Will follow me as before.”

Patience enters to find him dancing, and he tells her that, in future, he will be a changed man, having modelled himself upon Grosvenor. She expresses joy, but then recoils from him as she remembers that, as he is now to be utterly free from defect of any kind, her love for him cannot be absolutely unselfish.

Just as Bunthorne is offering to relapse, Grosvenor enters, followed by the ladies and the Dragoons. Grosvenor has assumed an absolutely commonplace appearance. They all dance cheerfully round the stage, and when Bunthorne asks the ladies “What it all means,” they tell him that as Grosvenor or “Archibald the All-right cannot be all wrong,” and as he has discarded æstheticism, æstheticism ought to be discarded.” Patience now discovers that she is free to love Grosvenor. Bunthorne is disappointed, but Lady Jane, who is still æsthetic tells him to cheer up, as she will never forsake him. They have scarcely time to embrace before the Colonel announces that the Duke has determined to choose a bride. He selects Lady Jane, greatly to the disgust of Bunthorne, who, finding himself the odd man out, declares, “I shall have to be contented with a tulip or lily.”