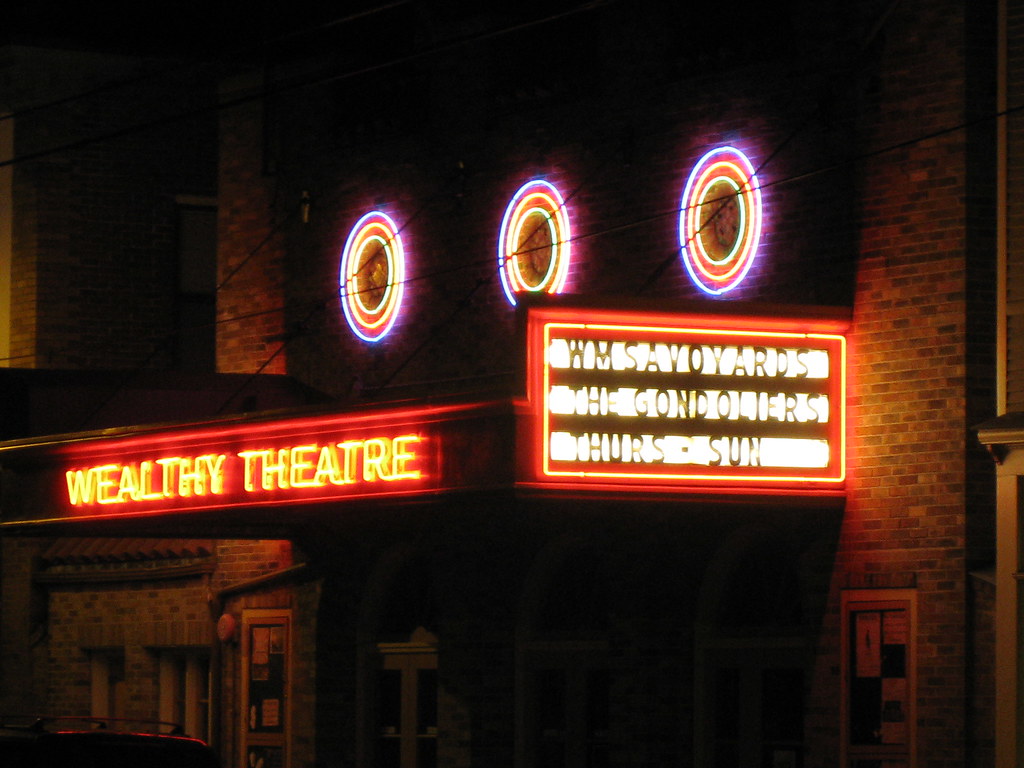 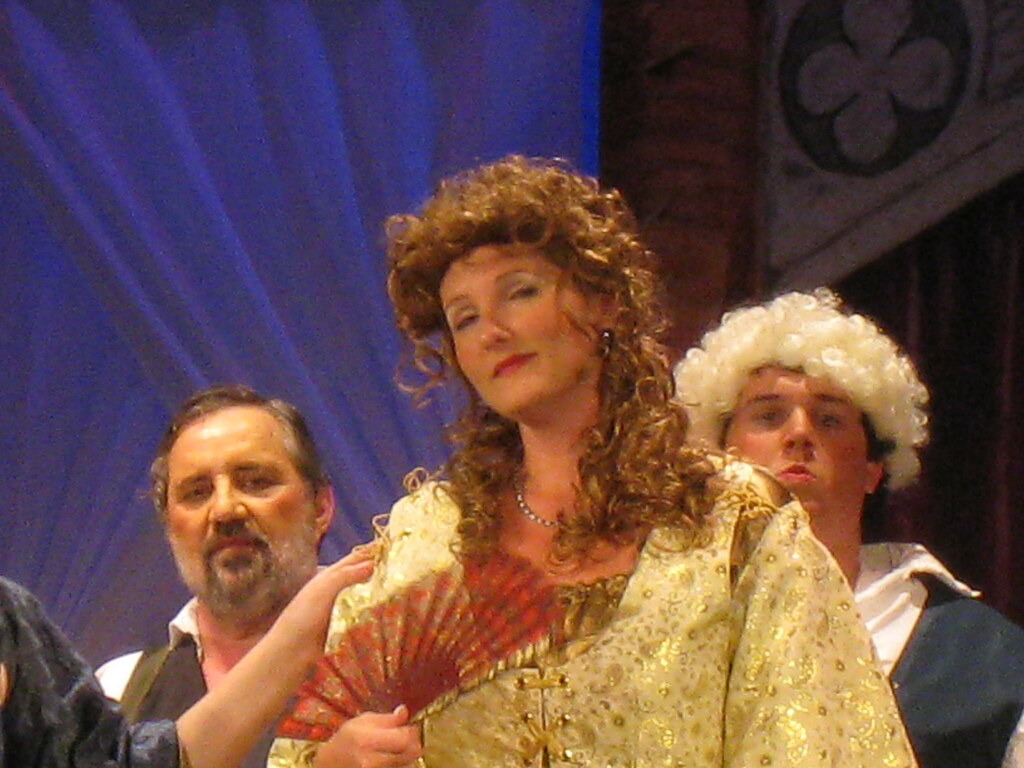 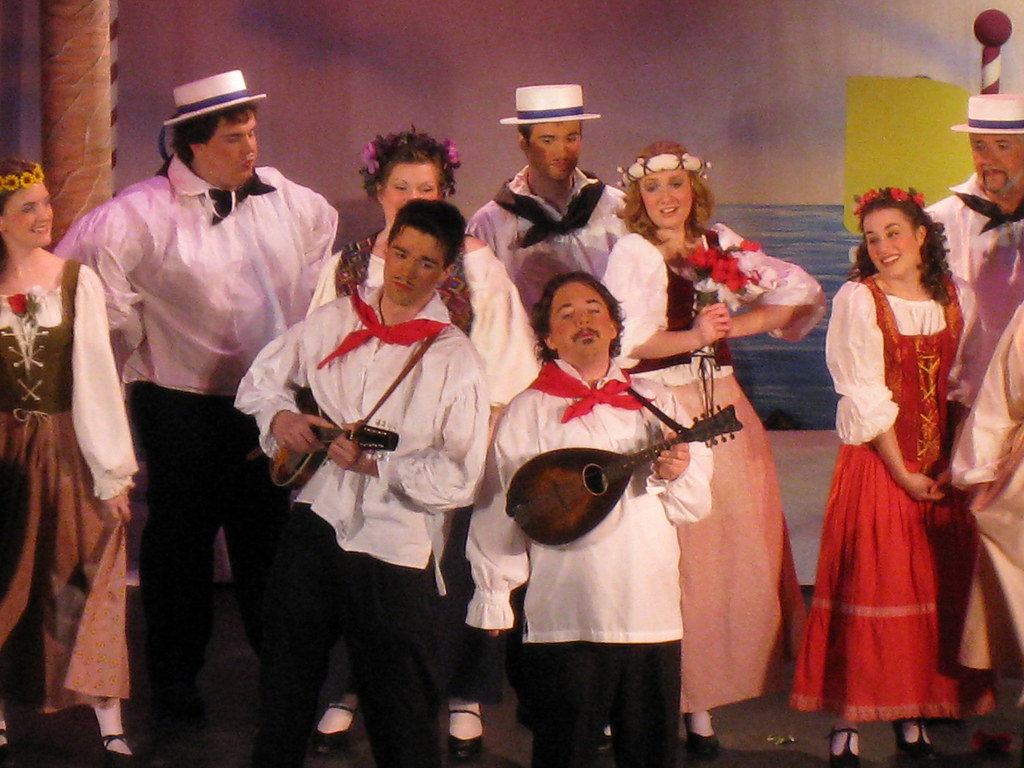 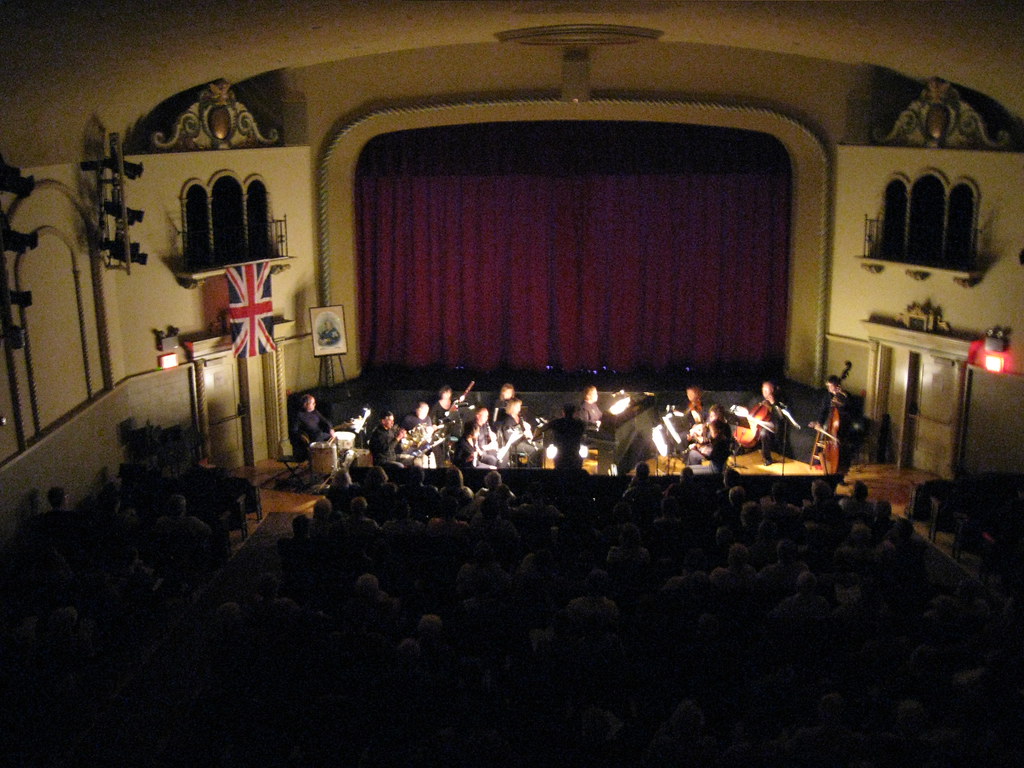 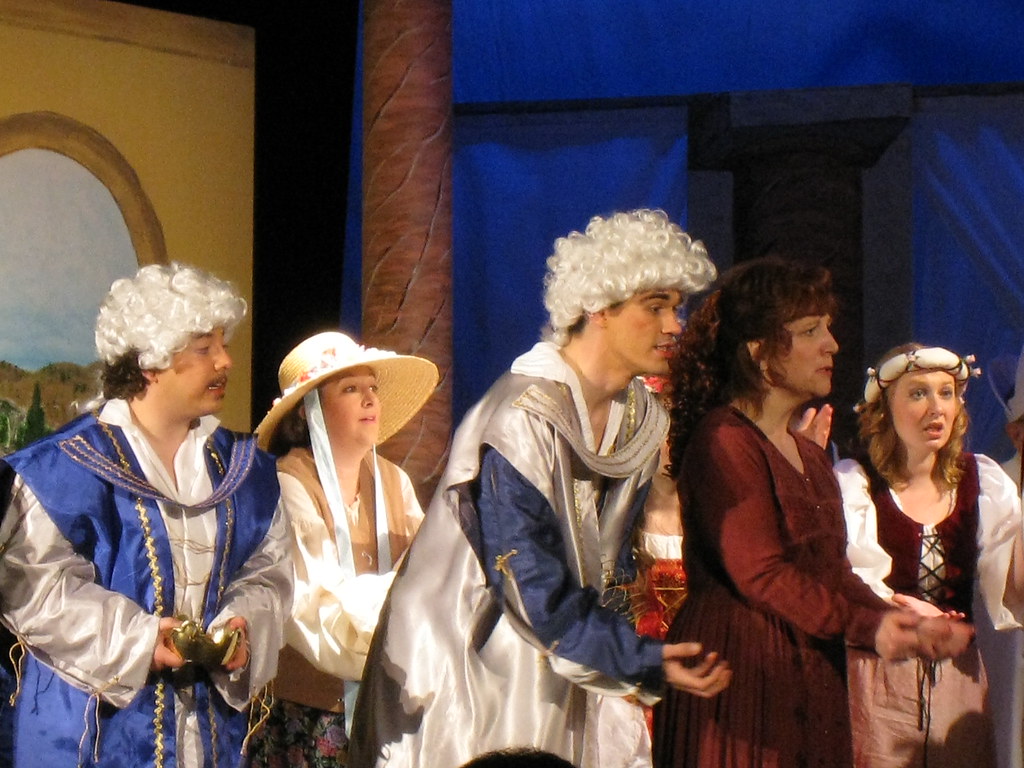 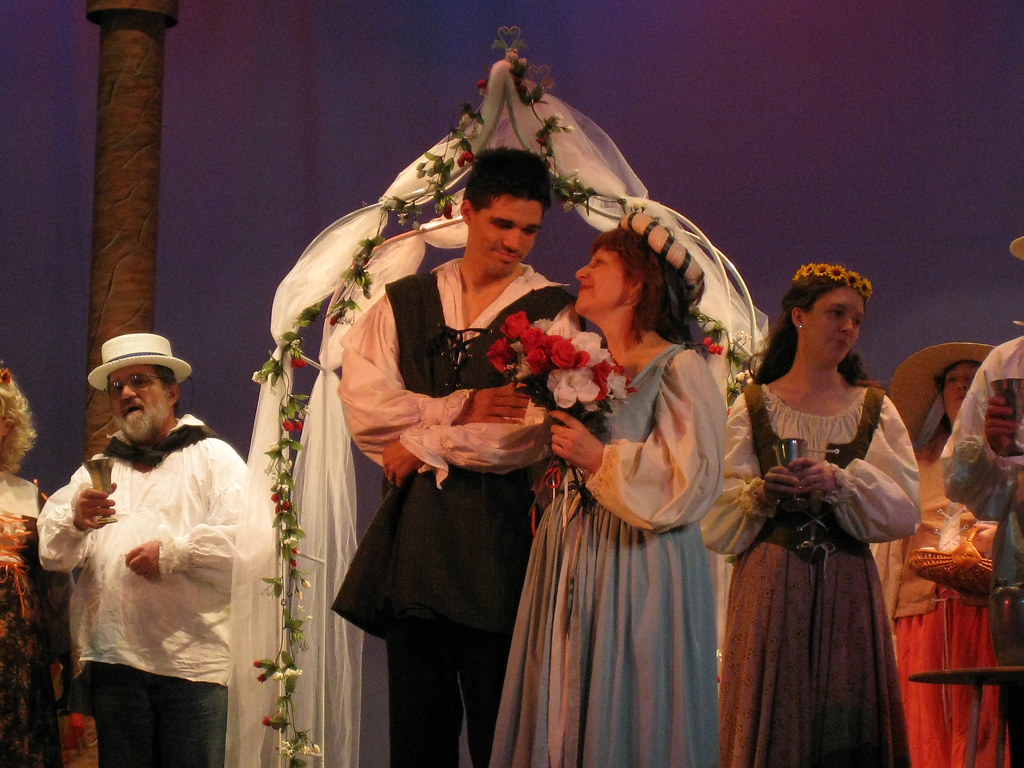 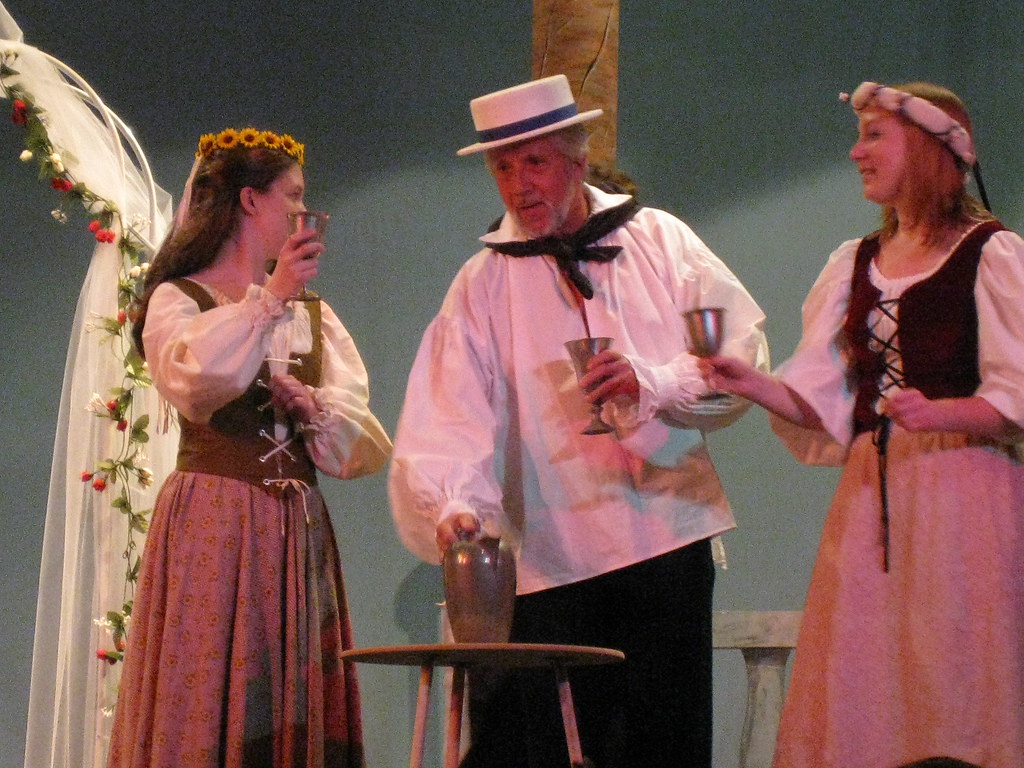 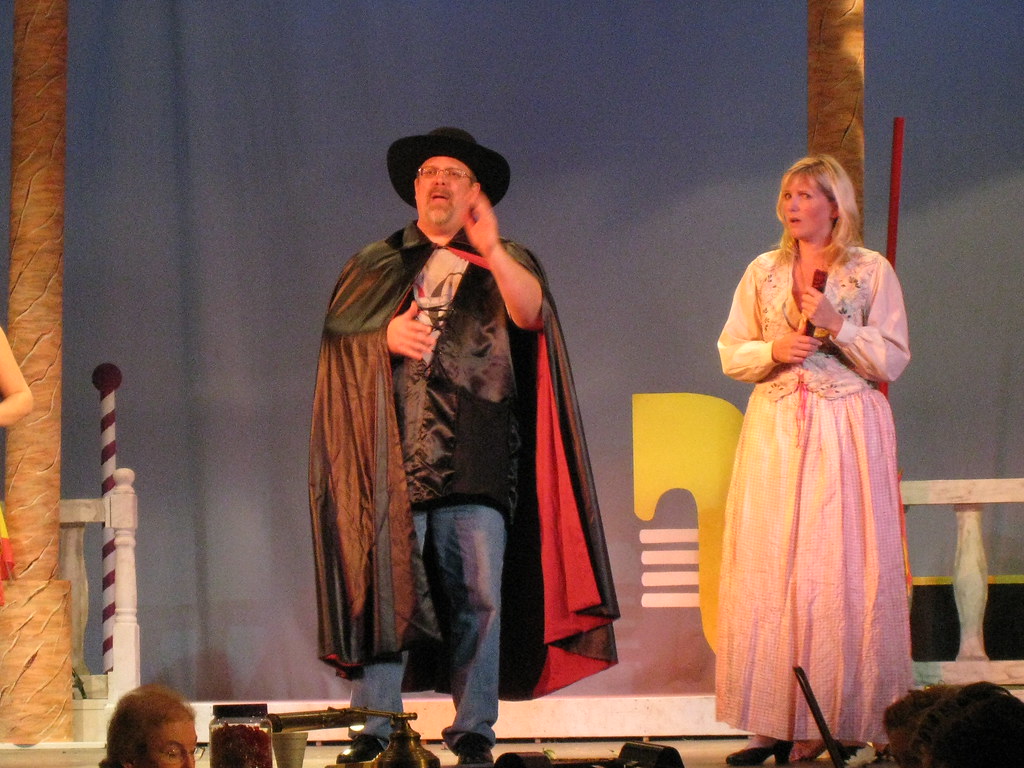 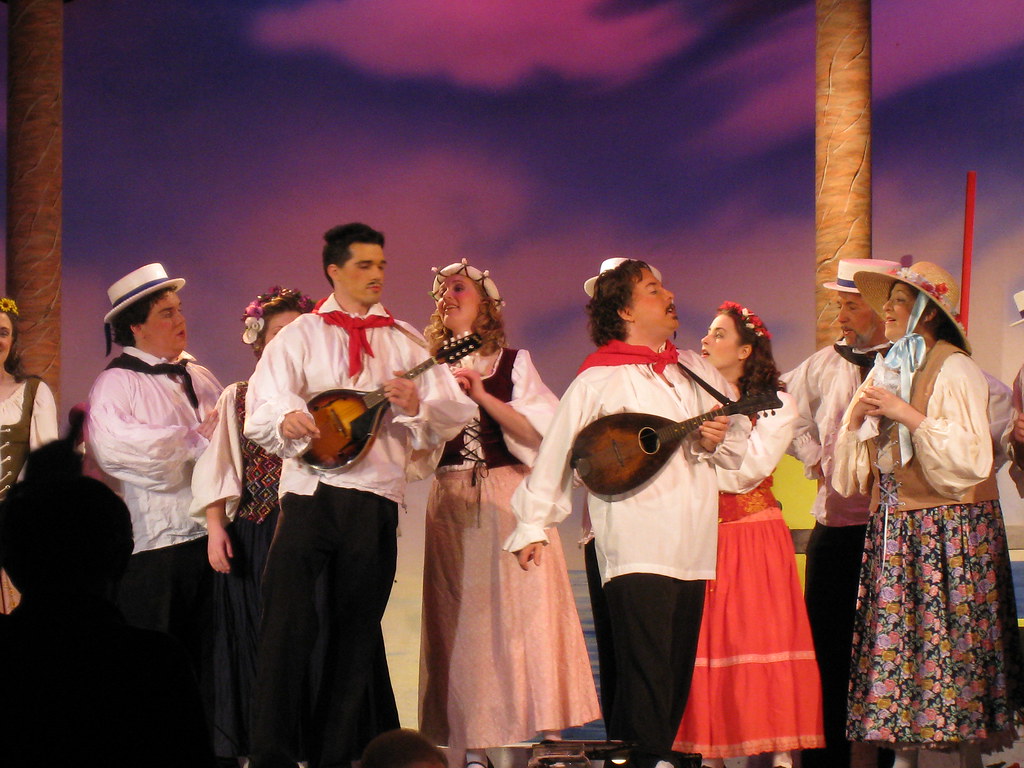 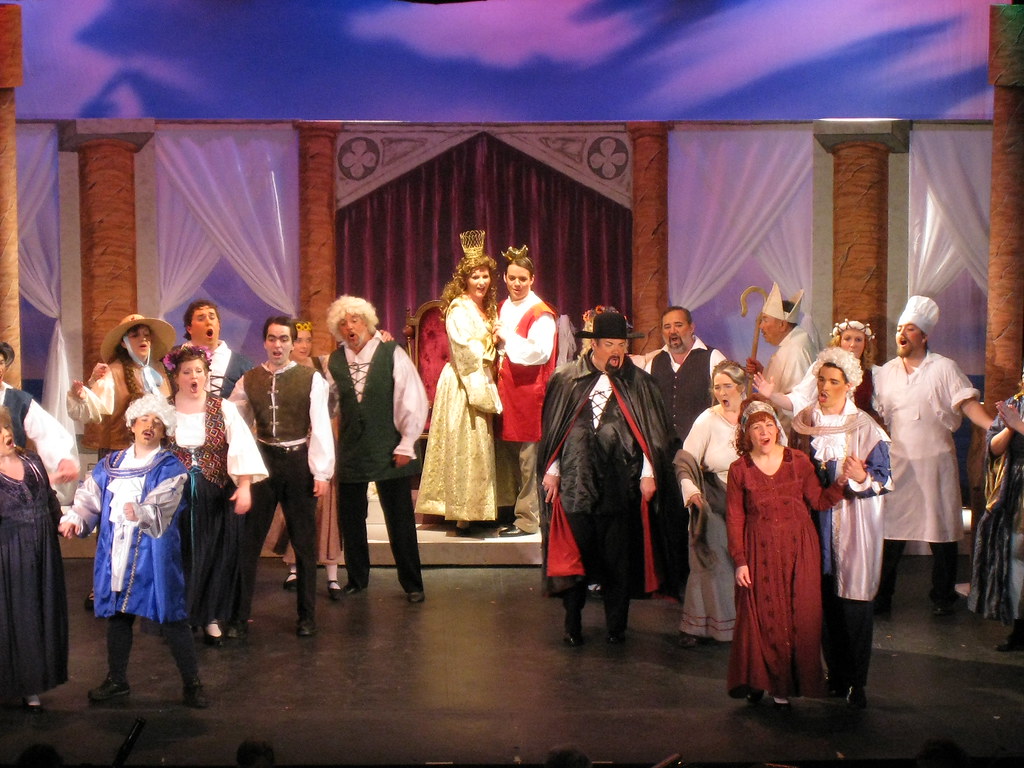 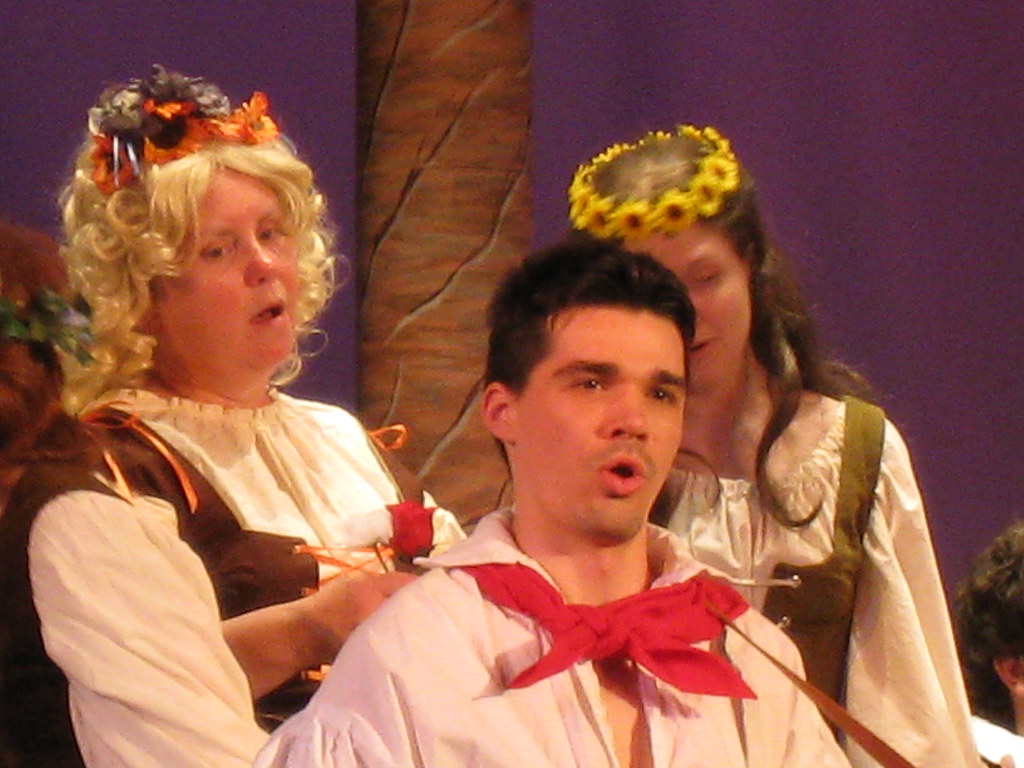 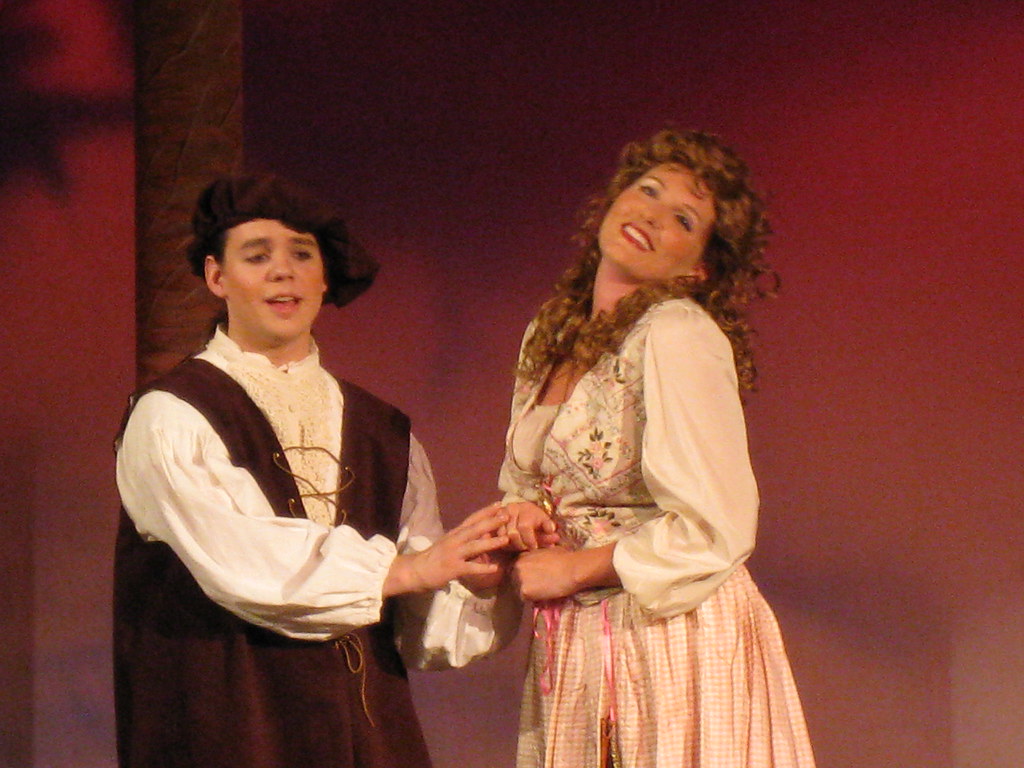 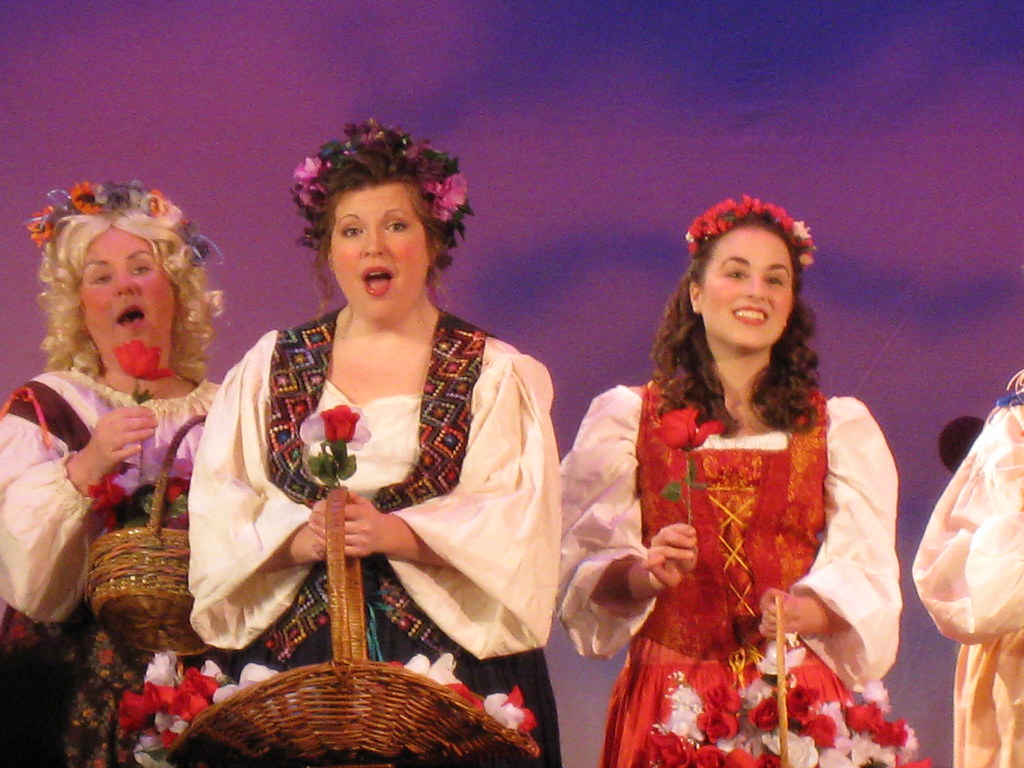 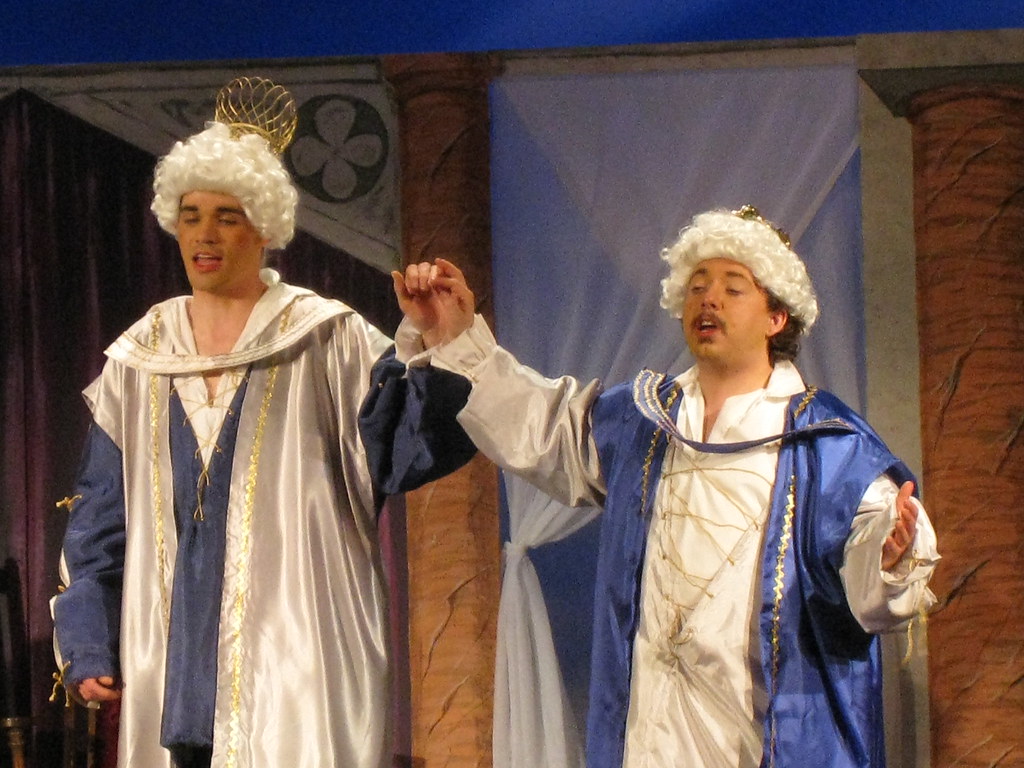 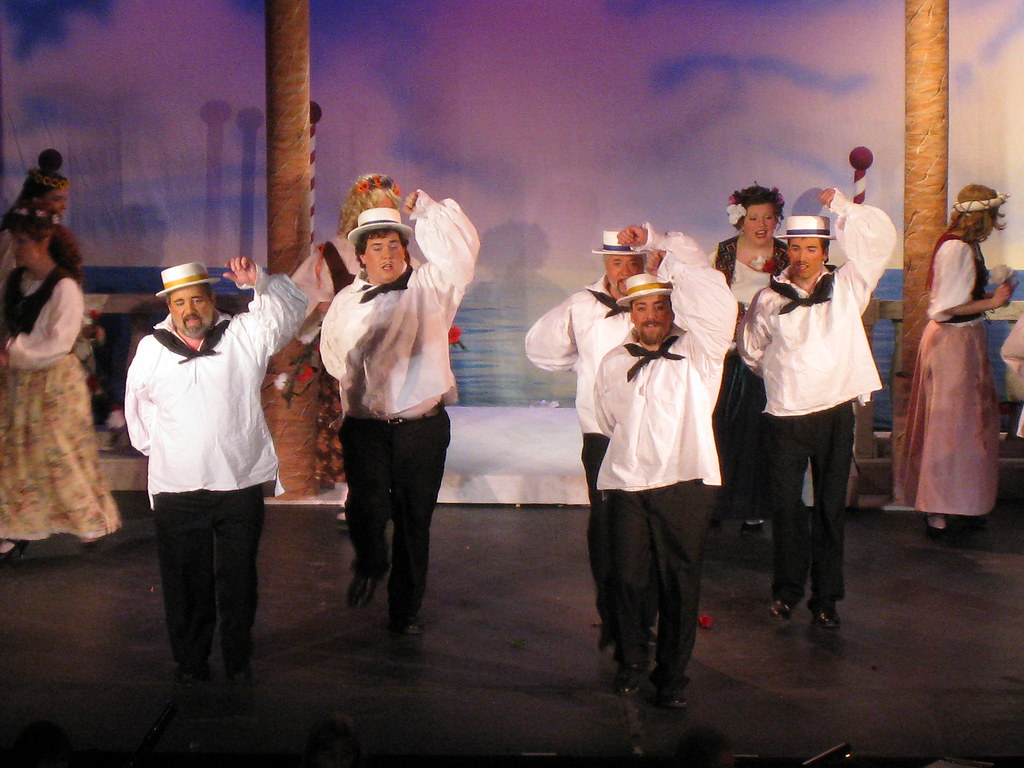 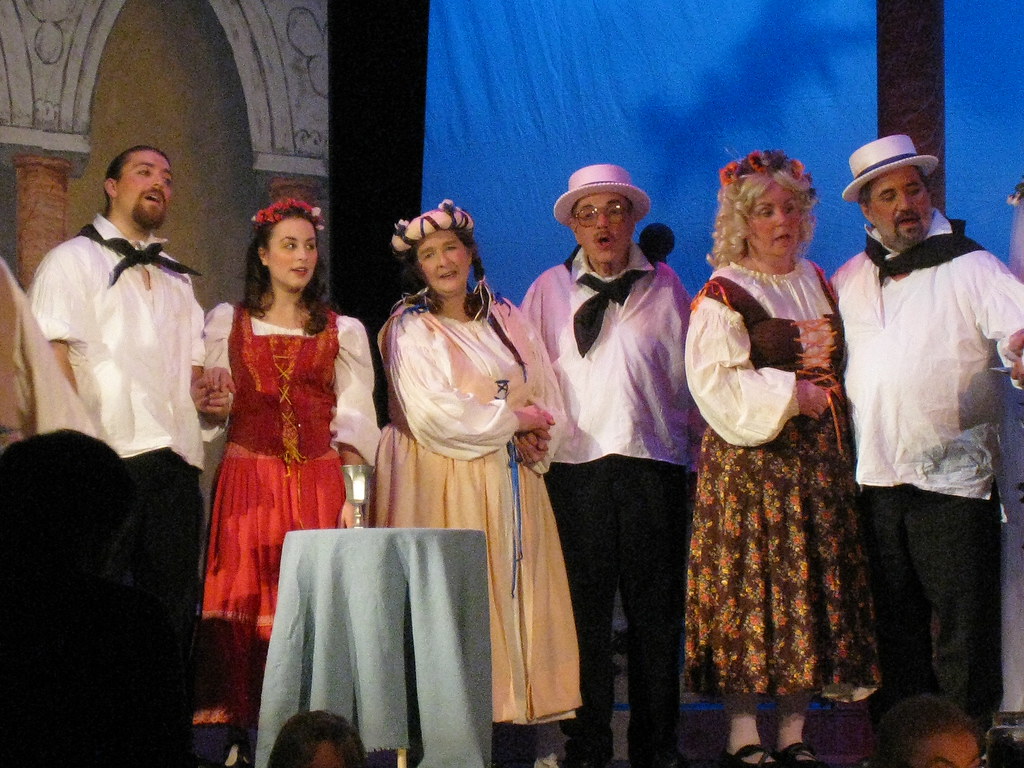 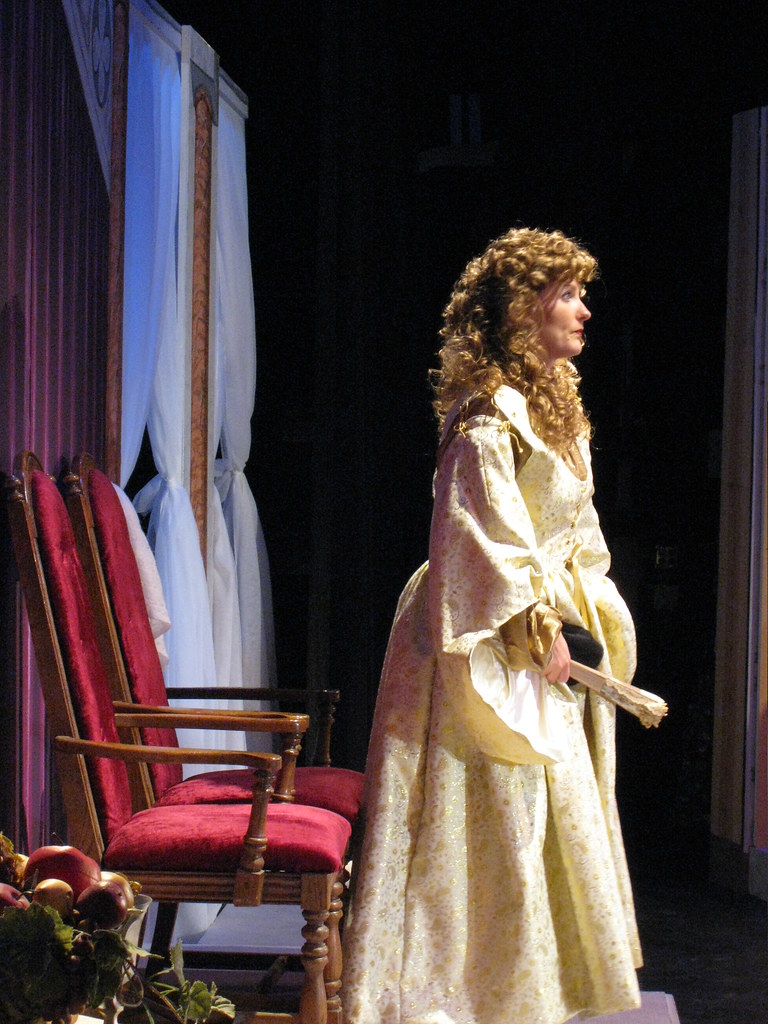 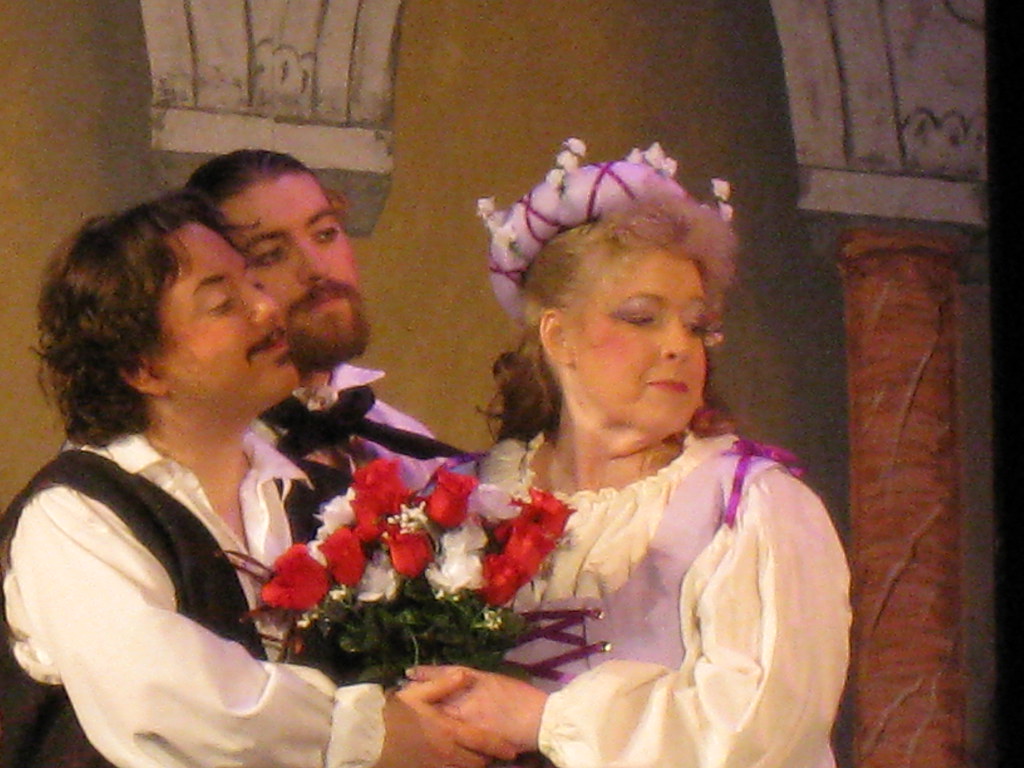 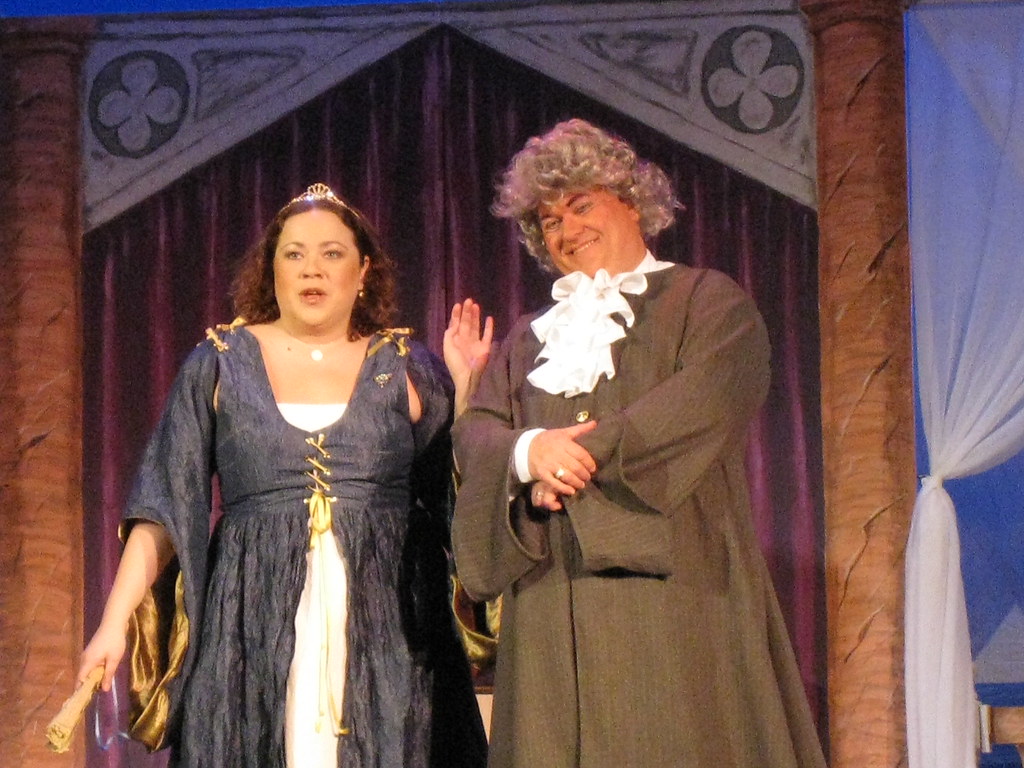 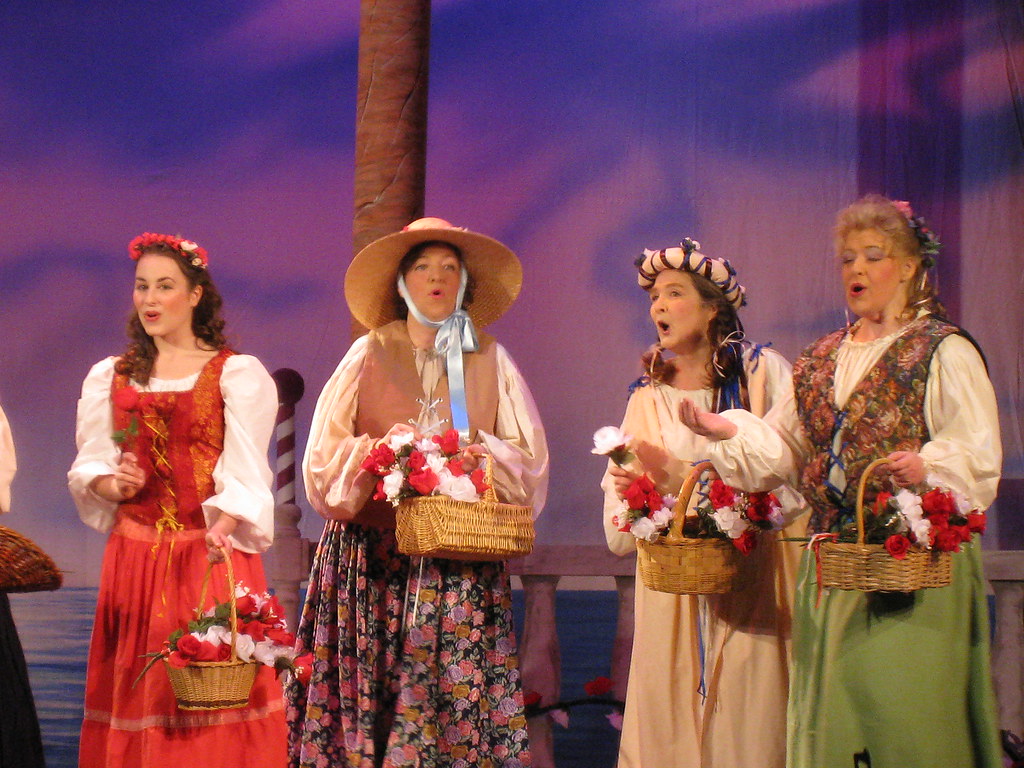 “THE GONDOLIERS” tells of the strange and romantic fortunes of two sturdy Republicans who are called upon jointly to assume the responsibilities of Monarchy. They are Marco and Guiseppe Palmieri, who ordinarily follow the calling of Venetian gondoliers, and who hold staunchly to the doctrine that “all men are equal.” Kingship does, indeed, seem rather less abhorrent to their ideas when they are summoned to fill that exalted office themselves, but at the same time they do concede that neither their courtiers nor their menials are their inferiors in any degree. Indeed, when they rise in the scale of social importance they see that their subjects rise too, and perhaps it is not surprising that in this quaint court of Barataria are functionaries basking in the splendour of such titles as the Lord High Coachman and the Lord High Cook. Even in the heart of the most democratic of mankind does the weakness for titles eternally linger!

It is in Venice, with a picturesque canal in the background, that the opera begins. The girls, their arms laden with roses white and roses red, are waiting for the most handsome and popular of all the gondoliers, who are coming to choose their brides from amongst this comely throng. So that, amidst such a bevy of loveliness, fate itself may select whom their partners shall be, the brothers decide to be blindfolded and to undertake to marry whichever two girls they catch. In this way Gianetta is claimed by Marco and Tessa by Guiseppe. And both were the very girls they wanted! Singing and dancing like the lightsome, joyous people they are, the couples hasten to the altar without more ado.

A Spanish grandee, the Duke of Plaza-Toro, now arrives by gondola with his Duchess and his daughter, Casilda. With them is their suite – the drummer-lad Luiz. The Duke is a celebrated, cultivated, underrated nobleman of impecunious estate, shabby in attire but unquestionably gentle in breeding. He laments that his entry into the town has not been as imposing as his station requires, but the halberdiers and the band are mercenary people, and their services were not available without prepayment in cash. Luiz is sent to announce the arrival of the ducal party to the Grand Inquisitor. While he is absent the Duke and Duchess tell their daughter the reason of their visit to Venice. She was married when only six months old to the infant heir to the Baratarian Throne. For State reasons the secret could not be told her before, and it seems that when her husband’s father, then the reigning King, became a Wesleyan Methodist and was killed in an insurrection the baby bridegroom was stolen by the Inquisition.

Casilda takes no pleasure in this sudden accession to Queenship. She has nothing to wear, and besides that the family is penniless. That fact does not disturb the Duke. He has anticipated the problem already. Seeing that his social prestige is enormous, he is having himself floated as a company, the Duke of Plaza-Toro, Limited. He does not regard the proceeding as undignified. This Duke never did follow the fashions. He has made it his business to lead them, and he recalls how “in enterprise of martial kind” when there was any fighting, he “led” his regiment from behind, because “he found it less exciting.” Such was this unaffected, undetected, well-connected warrior, the Duke of Plaza-Toro.

Left alone, Luiz and Casilda show themselves to be secretly in love with each other, and they bemoan the miserable discovery that has ruined the sweet dreams of the future. The Duke and Duchess in the meanwhile have gone to pay their respects to the Grand Inquisitor. They return with this lugubrious personage, garbed all in black, and present to him the little lady who, as he says, is so unexpectedly called upon to assume the functions of Royalty. Unfortunately he cannot introduce her to her husband immediately. The King’s identity is a little uncertain, though there is no probable, possible shadow of doubt that he is one of two men actually in the town and plying the modest but picturesque calling of the gondolier. It seems that, after the little prince was stolen, he was placed in the charge of a highly-respectable gondolier who had, nevertheless, an incurable weakness for drink, and who could never say which of the two children in his home was his own son and which was the prince. That matter can be solved by their nurse, Luiz’s mother, who is being brought from the mountains and whose memory will be stimulated, if need be, by the persuasive methods of the Inquisition.

The gondoliers now return with their brides. Tessa tells in a beautiful number how, when a merry maiden marries “every sound becomes a song, all is right and nothing’s wrong.” It was too sanguine a thought! The Grand Inquisitor, a gloomy figure amidst these festivities, finds the fact that Marco and Guiseppe have been married an extremely awkward one, and no less awkward their declaration that they are heart and soul Republicans. He does not tell them that one is married already – married to Casilda in infancy – but he does startle them by the news that one of them is a King. Sturdy Republicans as they are, they are loath to accept the idea of immediate abdication, and it is agreed that they shall leave for their country straightaway and, until the rightful heir is established, jointly hold the reins of government. The Grand Inquisitor for good reasons will not let their wives accompany them, but the separation may not be a long one, and the four speculate on the thrills of being a “right-down regular Royal Queen.” With a fond farewell the gondoliers then set sail for their distant dominion.

When in the second act we see the Pavilion of the Court of Barataria – there in one corner is the double-seated throne – we see also the happy workings of a “monarchy that’s tempered with Republican equality.” Courtiers and private soldiers, officers of high rank and menials of every degree are enjoying themselves without any regard to social distinctions, and all are splendidly garbed. The Kings neither expect nor receive the deference due to their office, but they try to make themselves useful about the palace, whether by polishing their own crowns, running little errands for their Ministers, cleaning up in the kitchens, or deputising for sentries who go “in search of beer and beauty.” It gives them, as Guiseppe sings, the gratifying feeling that their duty has been done, and in some measure it compensates for their two solitary grievances. One of these is that their subjects, while maintaining the legal fiction that they are one person, will not recognise that they have independent appetites. The other is – the absence of their wives. Marco is moved to describe the great specific for man’s human happiness :-

“Take a pair of sparkling eyes,
Hidden ever and anon,
In a merciful eclipse.
Do not heed their mild surprise,
Having passed the Rubicon.
Take a pair of rosy lips.
Take a figure trimly planned –
Such as admiration whets
(Be particular in this)
Take a tender little hand,
Fringed with dainty fingerettes,
Press it – in parenthesis –
Take all these, you lucky man –
Take and keep them if you can!”

No sooner has he finished than the contadine enter, having braved the seas at the risks of their lives, for existence without their menfolk was dull and their womanly sense of curiosity strong. The re-union is celebrated by a boisterous dance (the cachucha). It is interrupted by the arrival of another unexpected visitor – the Grand Inquisitor.

The Grand Inquisitor, left alone with his protégés, first of all expresses his doubts whether the abolition of social distinctions is a workable theory. It had been tried before, and particularly by a jovial old King who, in moments of tipsy benevolence, promoted so many favourites to the top of the tree that “Lord Chancellors were cheap as sprats, and Bishops in their shovel hats were plentiful as tabby cats – in point of fact, too many.” The plain conclusion was that “when everyone is somebodee, then no one’s anybody.” Then he tells them of the marriage of one of them in infancy. It is certainly an awkward predicament. Two men are the husbands of three wives! Marco, Guiseppe, Tessa and Gianetta try to solve the complicated plot.

Soon afterwards the ducal party arrive attired in the utmost magnificence. The Plazo-Toro issue has been most successful, and the Duke proceeds to describe how his money-making devices include those of securing small titles and orders for Mayors and Recorders, and the Duchess’s those of chaperoning dubious ladies into high-class society. The Duke ceremoniously receives the two gondoliers, but he has to take exception to the fact that his arrival has been marked by no royal salutes, no guard of honour, and no triumphal arches. They explain that their off-handed people would not tolerate the expense. His Grace thereupon advises them to impress their court with their importance, and to the strains of a delightful gavotte he gives the awkward fellows a lesson in the arts of deportment.

Luckily, the tangled plot is swiftly and very happily solved on the appearance of the old foster mother, who declares that the missing Prince is none other than Luiz. He promptly ascends the throne and claims the hand of Casilda, while Marco and Guiseppe, their days of regal splendour completed, are glad enough to return with their wives to beautiful Venice, there to become “once more gondolieri, both skilful and wary.”