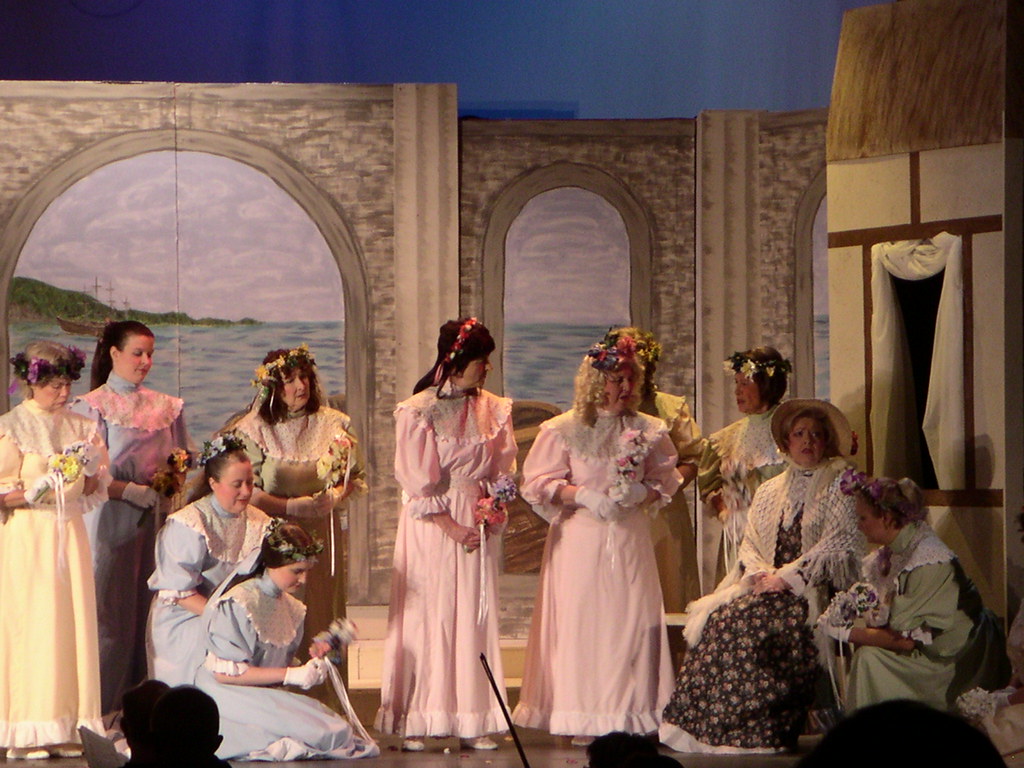 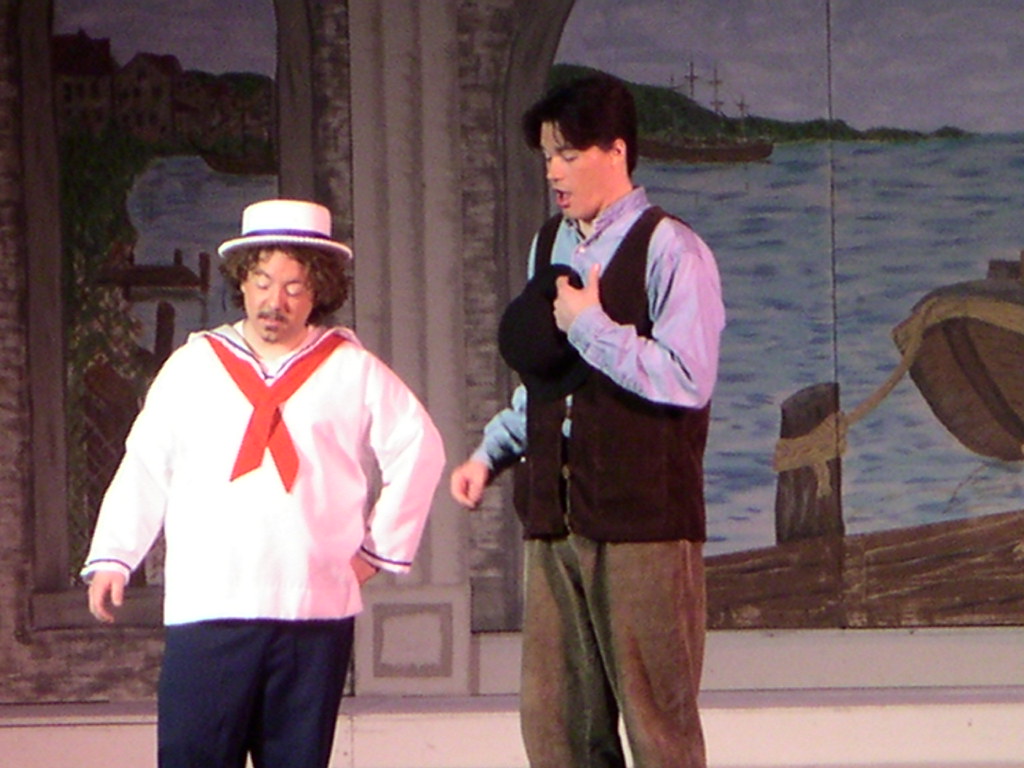 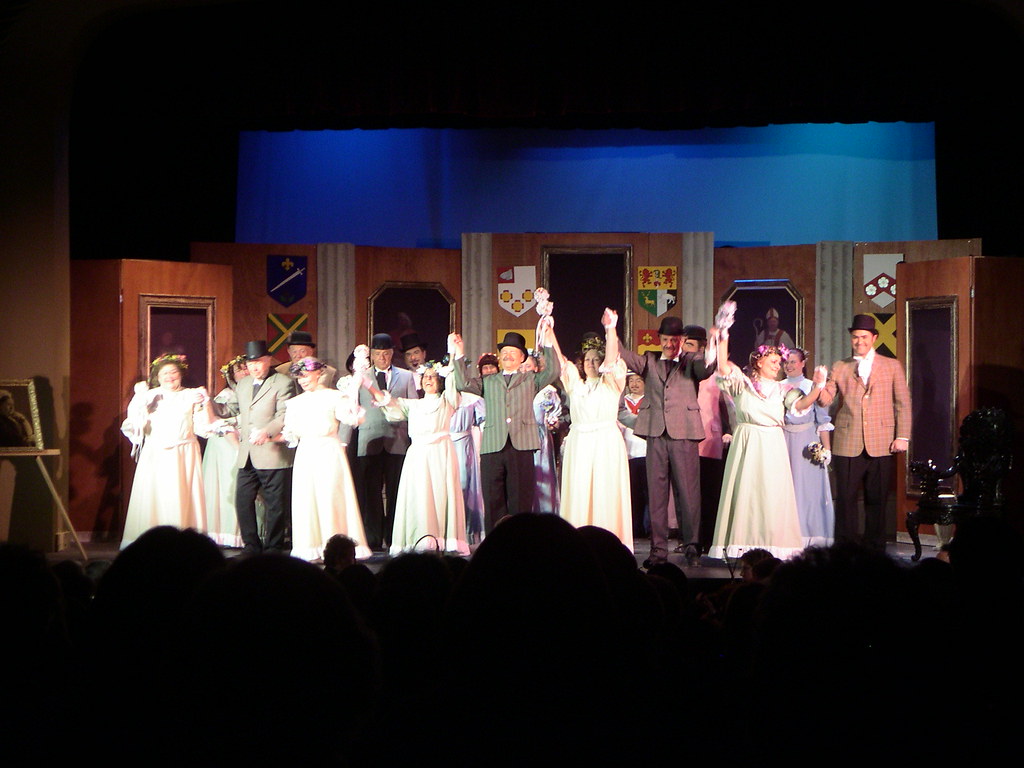 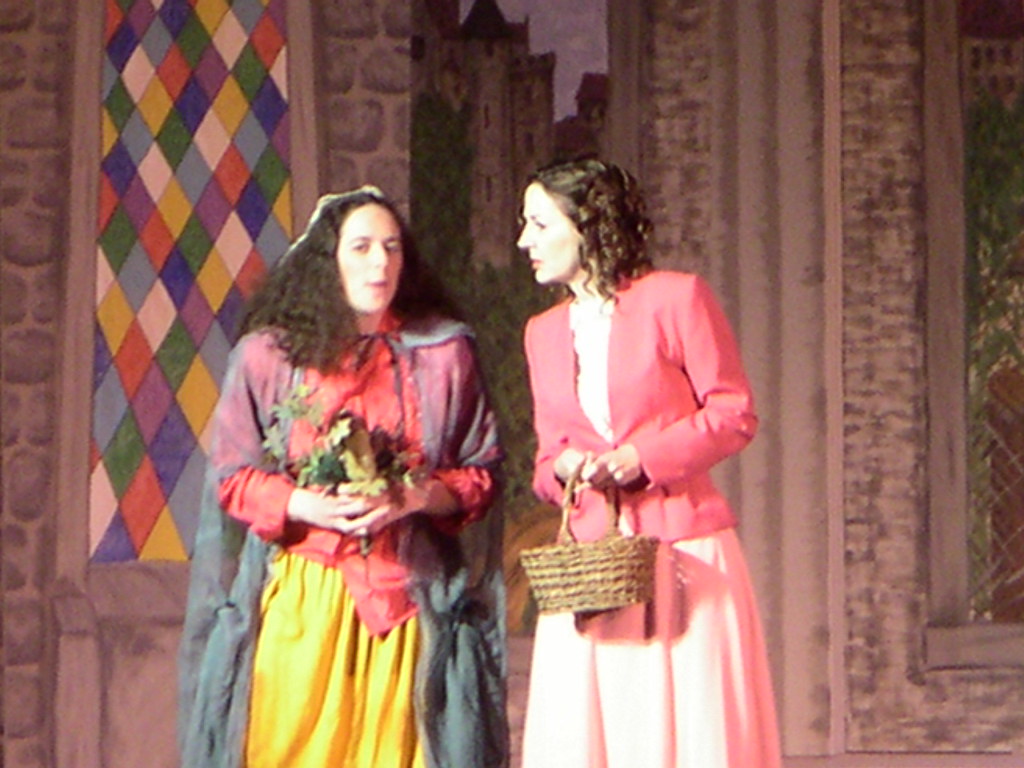 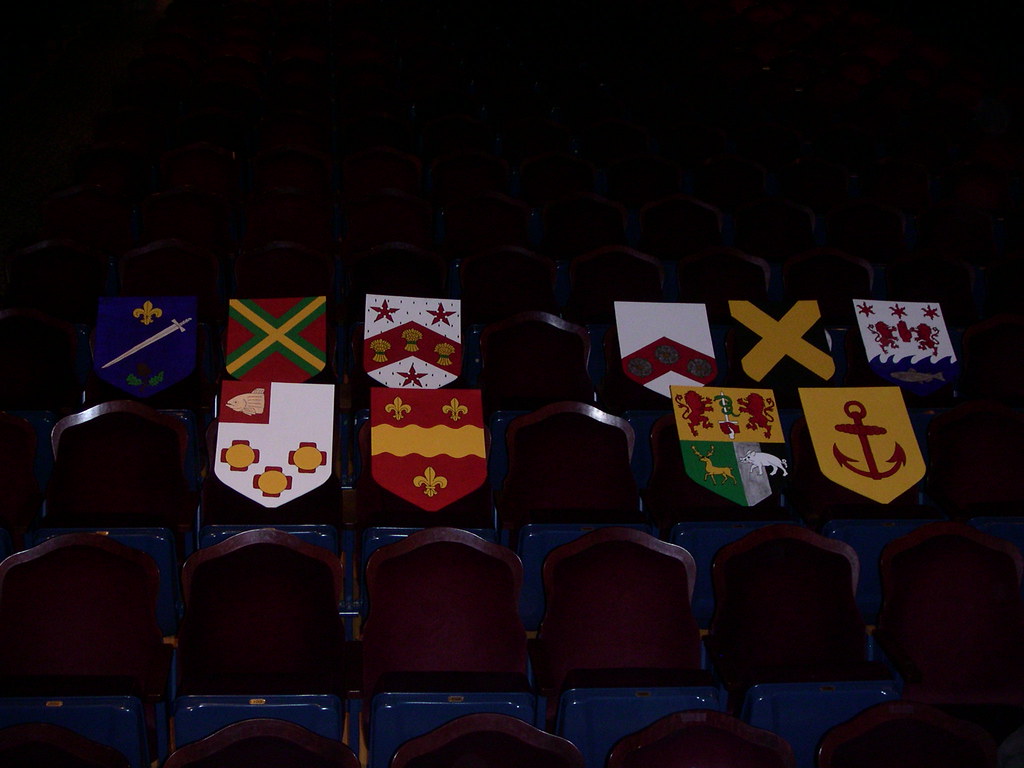 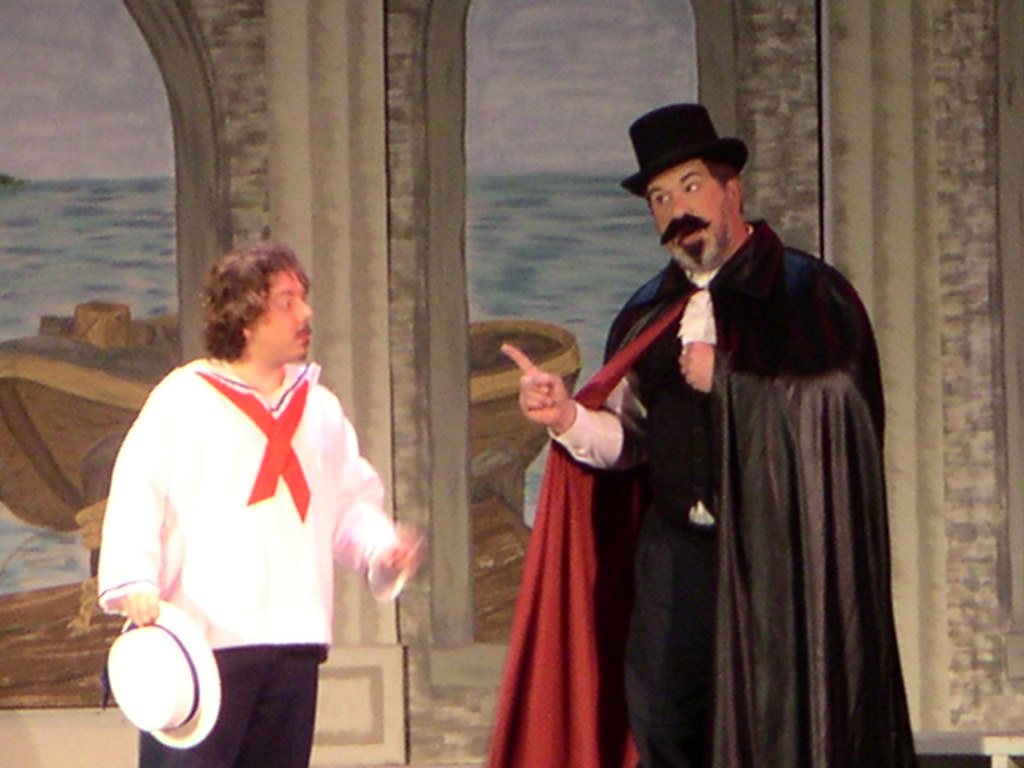 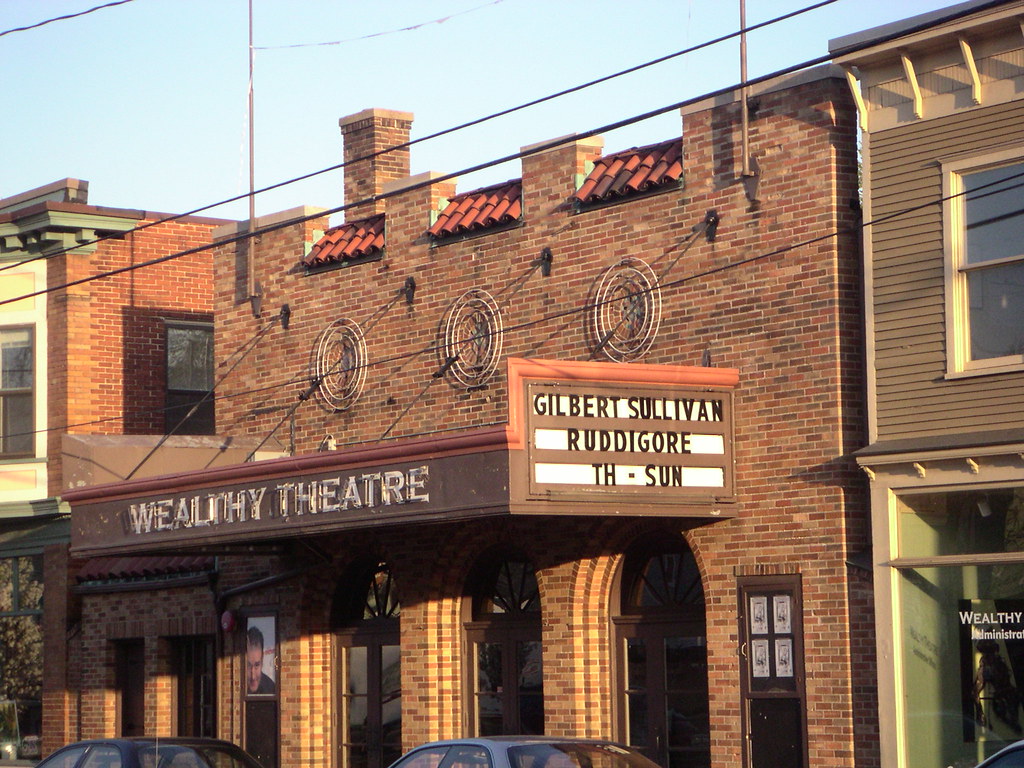 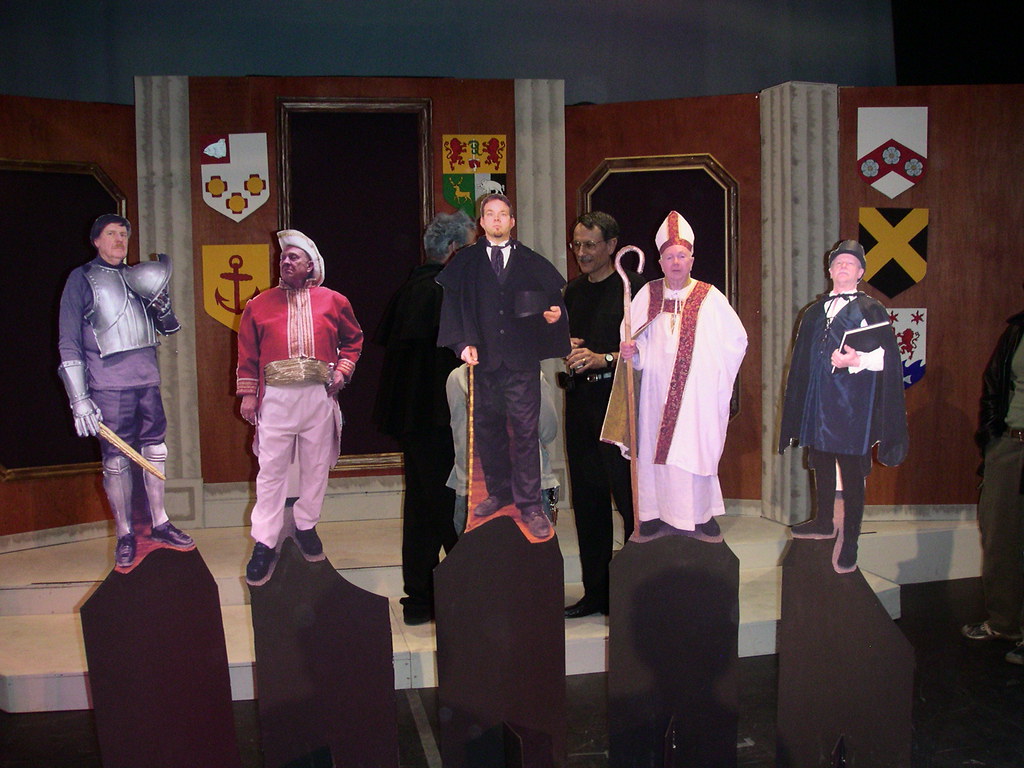 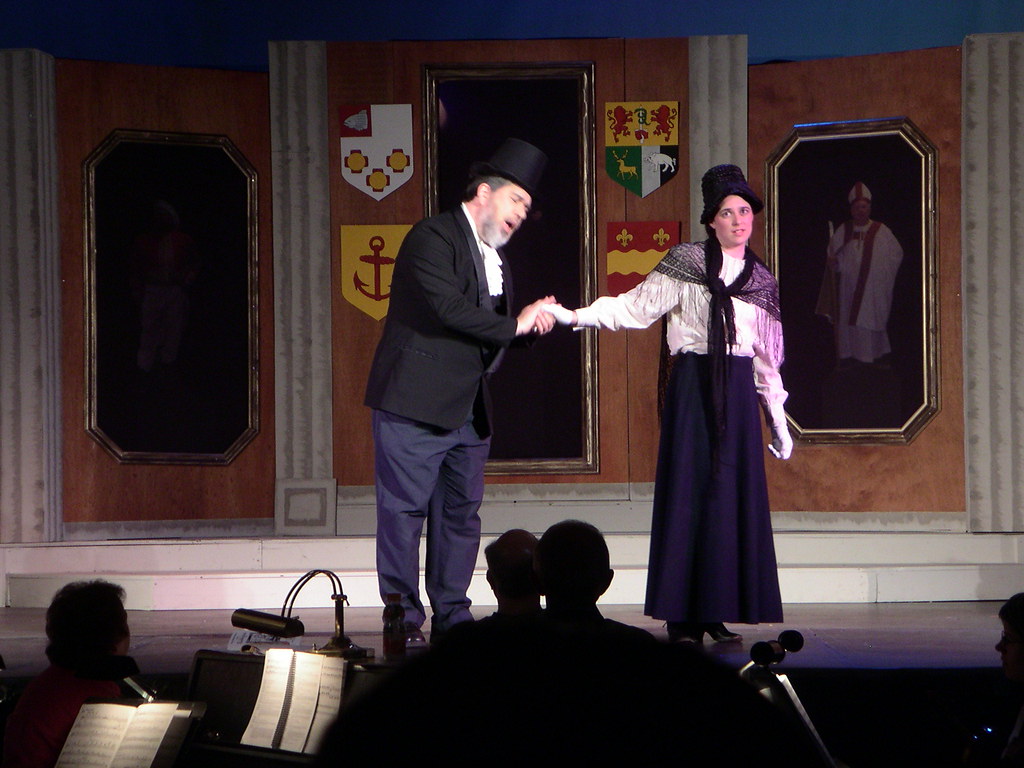 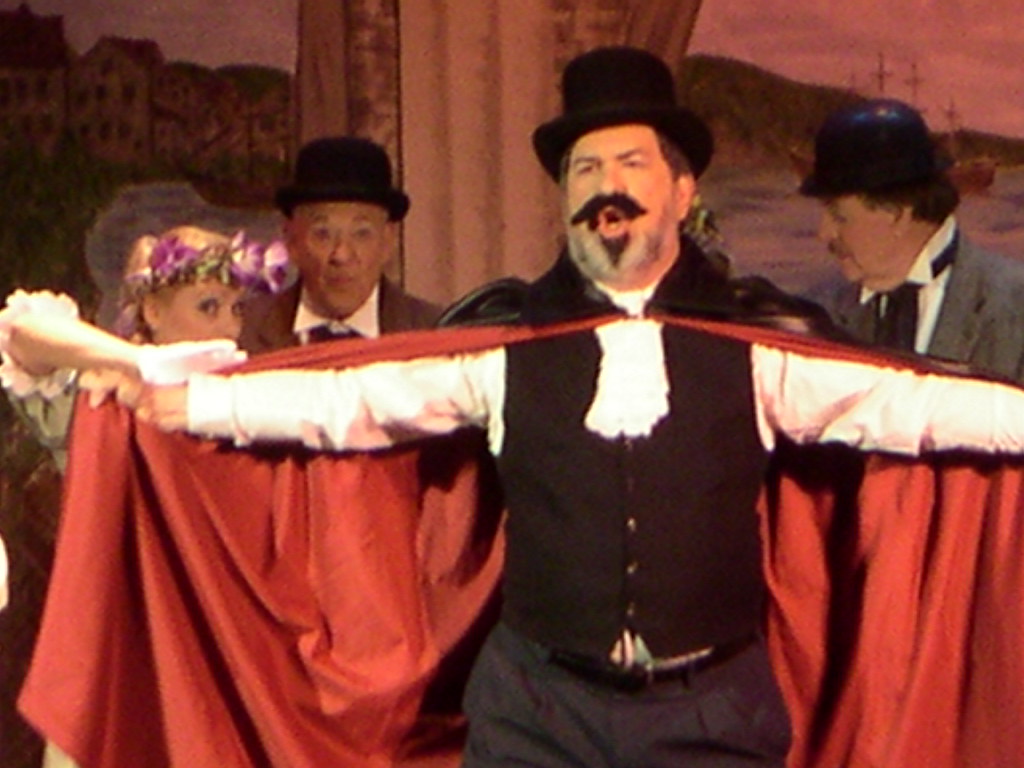 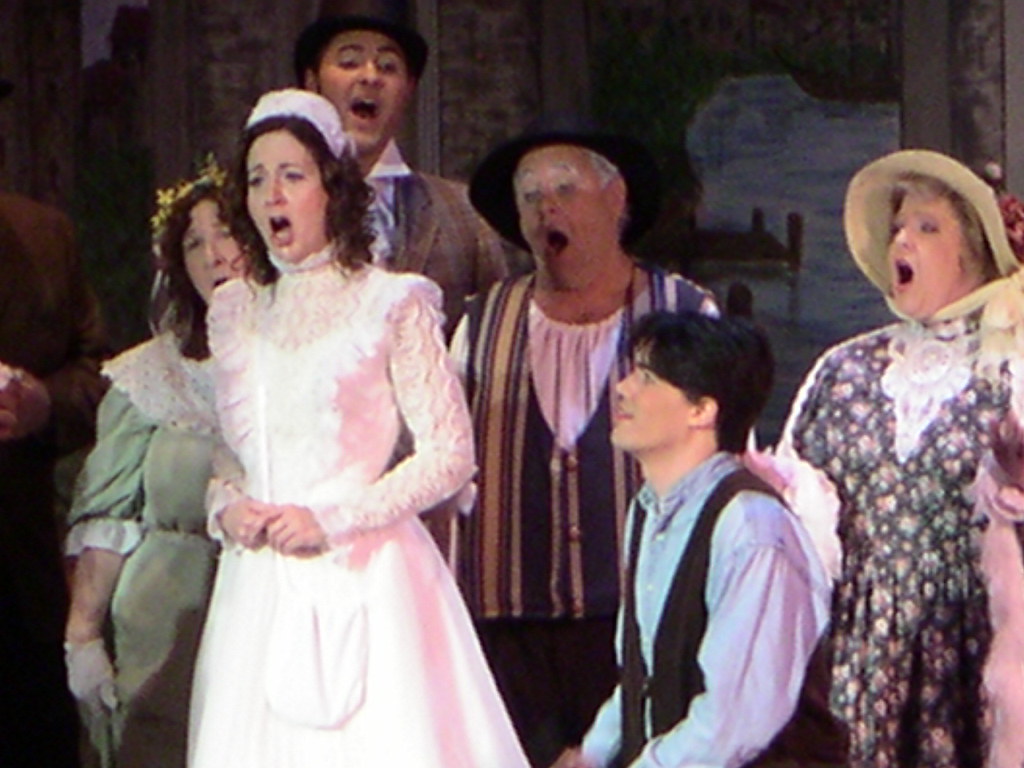 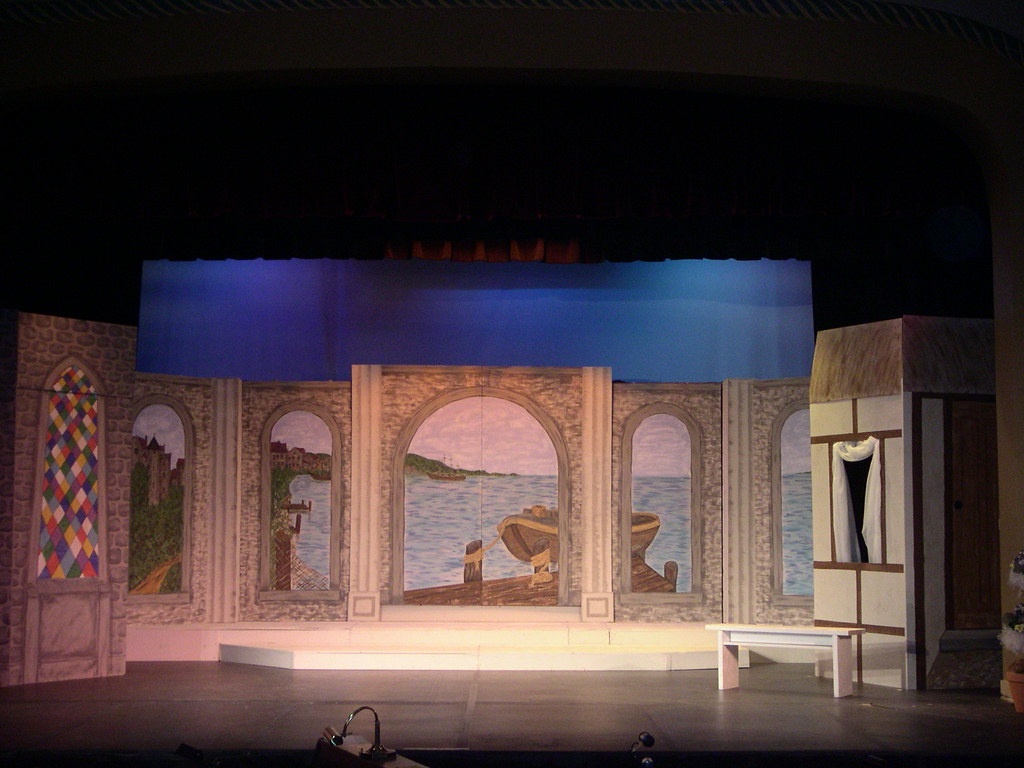 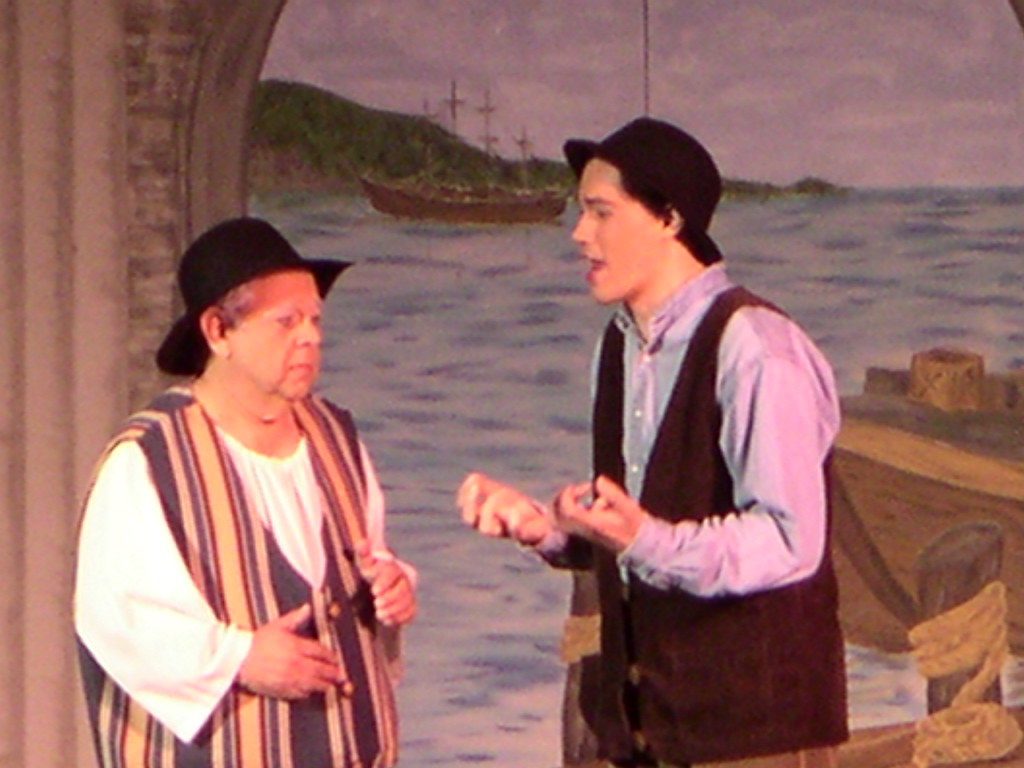 In the days of long, long ago there lived the wicked Sir Rupert Murgatroyd, baronet of Ruddigore. He spent all his leisure and his wealth in the persecution of witches, and the more fiendish his cruelties, the more he enjoyed the ruthless sport. But there came a day when he was roasting alive an old witch on the village green. The hag uttered a terrible curse both on the baronet and on all his descendants. Every lord of Ruddigore was doomed to commit one crime a day, and if he attempted to avoid it or became satiated with guilt, that very day he should die in awful agony. The prophecy came true. Each heir to the title inherited the curse and came in the end to a fearful death.

Upon this plot Gilbert wrote his clever burlesque on the transpontine drama – the drama of the virtuous peasant girl in the clutches of the bold and bad baronet – and amongst his characters is a tragic figure not unlike Shakespeare’s Ophelia. The first scene is laid in the pretty Cornish fishing village of Rederring. This village, by the way, has a quaint institution in the form of a troupe of professional bridesmaids, who are bound to be on duty from ten to four o’clock every day, but whose services have of late been in little request. The girls can only hope that they may soon be able to celebrate the betrothal of Rose Maybud, the belle of Rederring, a precise little maid whose every action is regulated by a book of etiquette, written by no less an authority than the wife of a Lord Mayor. Should an utter stranger be allowed to pay her pretty compliments? “Always speak the truth,” answers the book. It tells her that “in accepting an offer of marriage, do so with apparent hesitation,” and this same guide and monitor declares that, in similar circumstances, “a little show of emotion will not be misplaced.” Rose, indeed, has had very many suitors, but as yet her heart is free.

Early in the opera Dame Hannah, who was herself once wooed by the last baronet in disguise, relates the story of the terrible curse on the house of Murgatroyd. She is Rose’s aunt, and she talks to the girl about Robin Oakapple, a young man who “combines the manners of a Marquis with the morals of a Methodist.” Now, this same Robin Oakapple, we afterwards learn, is himself the real owner of Ruddigore, but ten years ago he so dreaded the thought of becoming the victim of the witch’s malediction that he fled from his ancestral home, assumed the style and name of a simple farmer, and lived unsuspected in Rederring. In the belief that he was dead his younger brother succeeded to the baronetcy and all its obligations to a life of infamy. Only two know the secret – Robin’s faithful servant, Old Adam, and his sailor foster-brother, Richard Dauntless.

Robin is such a shy fellow that he cannot summon up courage to propose to Rose Maybud. She, it seems, would not be unwilling to return his affections if he declared them and she gives more than a broad hint to her bashful lover in a delightful duet, “Poor Little Man.” But Robin has to do his love-making by proxy. Luckily or otherwise, Richard has just returned from the sea, and this heart’y British tar sings a rollicking song in the Dibdin manner about how his man-o’-war, the Tom-Tit, “met a little French frigate”, and how they had “pity on a poor Parley-voo.” When “Ruddigore” was produced, this number gave grave offence to the French people, and there were critics at home who held that it reflected also on the British Navy. The storm, however, never led then and never would lead now to international complications, and what questions of taste there may be in the lyric are soon forgotten in the engaging hornpipe which follows the song.

Richard, who talks in nautical phrases and declares that he always acts strictly as his heart dictates, promises to help Robin in securing the hand of Rose Maybud. He at least is not afflicted with too much diffidence, and Robin himself sings the lines, which have now passed into a proverb, that if in the world you wish to advance “you must stir it and stump it and blow your own trumpet.” But Richard, when he sees the girl, acts as his heart dictates and falls in love with her himself, the courtship scene being delightfully quaint. Robin returns to claim his bride, but when he finds that his foster-brother has played him false, he is not loth to praise his good qualities. Yet, in a trio, the fickle Rose, having the choice between a man who owns many acres and a humble sailor, gives herself to Robin Oakapple.

This incident is followed by the appearance of Mad Margaret, a crazy figure in white who lost her reason when she was jilted by the reigning baronet, Sir Despard Murgatroyd. The poor, distracted girl is still seeking for her faithless lover, and as she toys with her flowers she sings a plaintive and haunting ballad “To a garden full of posies.” Following this strange scene, there arrive the Bucks and Blades – all wearing the regimental uniforms of Wellington’s time, the period to which the opera is supposed to belong – and after them the gloomy Sir Despard. The crowd shrink from him in horror, while he, poor man, tells how he has really the heart of a child, but how a whole picture gallery of ancestors threaten him with death if he hesitates to commit his daily crime. Then Richard re-enters. Either because of his anger that Robin has claimed Rose’s hand or because, at whatever cost, he must do as his heart dictates, he makes known to the baronet that his missing brother is none other than Robin Oakapple. When, a little later, the nuptial ceremony of the happy couple is about to begin, the festivities are interrupted by Sir Despard dramatically declaring Robin’s real identity, and poor Robin has to forfeit Rose, who once more turns to Richard, and face a fateful existence as Sir Ruthven Murgatroyd.

For the second act the scene moves to the haunted Picture Gallery of Ruddigore Castle. Sir Ruthven, otherwise Robin, now wears the haggard aspect of a guilty roué, while the once-benevolent Old Adam acts the part of the wicked “confidential adviser of the greatest villain unhung.” They discuss a likely crime for the day. It concerns Richard and Rose, who have arrived to ask for the baronet’s consent to their marriage, and he retorts by threatening to commit them to a dungeon. This the sailor thwarts by waving a Union Jack. Then Rose prevails upon the wicked relative to relent. Left alone, the unhappy man addresses the portraits of his ancestors, bidding them to remember the time when they themselves welcomed death at last as a means of freedom from a guilty existence, and urging them to let the thought of that repentance “tune your souls to mercy on our poor posterity.” The stage darkens for a moment, and then it is seen that the pictures have become animated and that the figures, representing the long line of the accursed race, and garbed magnificently according to the times in which each of the ancestors lived, have stepped from their frames. Sir Roderic, the last of the baronets to die, sings a spectral song about the ghostly revelries by night.

Now the ancestors remind their degenerate successor that it is their duty to see that he commits his daily crimes in conscientious and workmanlike style. They are not impressed with his record of the crimes he has so far committed. “Everybody does that,” they tell him, when he declares that he has falsified his income-tax return, and they are also unmoved when he says that, on other days, he forged his own will and disinherited his unborn son. They demand that he must at least carry off a lady, and when he refuses they torture him until, in agony, he has to accept their command. When the ghosts have returned to their frames Old Adam is accordingly ordered to bring a maiden – any maiden will do – from the village.

Once more we meet Sir Despard and Mad Margaret. They are prim of manner, they wear black of formal cut, and in every way their appearances have changed. They are married and conduct a National School. The ex-baronet has become expert at penny readings. Margaret, new a district visitor, has recovered her sanity, though she has occasional lapses. The quaint duet between them is followed by a meeting with Robin, who hears that his record of infamy includes not only the crimes he has committed during the week, but all those perpetrated by Despard during the ten years he reigned at Ruddigore. He decides, even at the cost of his life, to bid his ancestors defiance. But now Old Adam returns, not with a beautiful maiden, but with old Dame Hannah. She is a tiger cat indeed, and despite the baronet’s declaration that he is reforming and that his intentions towards her are honourable, she seizes a formidable dagger from one of the armed figures and declares for a fight to the finish. The episode is interrupted by the re-appearance of the ghostly Sir Roderic. What is more, he and Dame Hannah recognise themselves as old lovers, and a whimsical love-scene leads up to a tender little ballad about the “flower and the oak tree.”

The end comes swiftly. Robin, accompanied by all the other characters, rushes in to declare his happy discovery. He argues that a baronet can die only by refusing to commit his daily crime, and thus it follows that a refusal to commit a crime is tantamount to suicide, which is in itself a crime. The curse will thus not stand logical analysis! Sir Roderic concurs, and as the natural deduction is that he himself ought never to have died at all, he and Dame Hannah are able at last to bring joy and laughter within the grim walls of Ruddigore. Robin, having found a week as holder of a title ample enough, determines to earn a modest livelihood in agricultural employment, and this time he both claims and keeps the hand of Rose Maybud. Richard, robbed of his intended bride, soon replaces her from amongst the troupe of professional bridesmaids, while Despard and Margaret leave to pass a secluded existence in the town of Basingstoke.