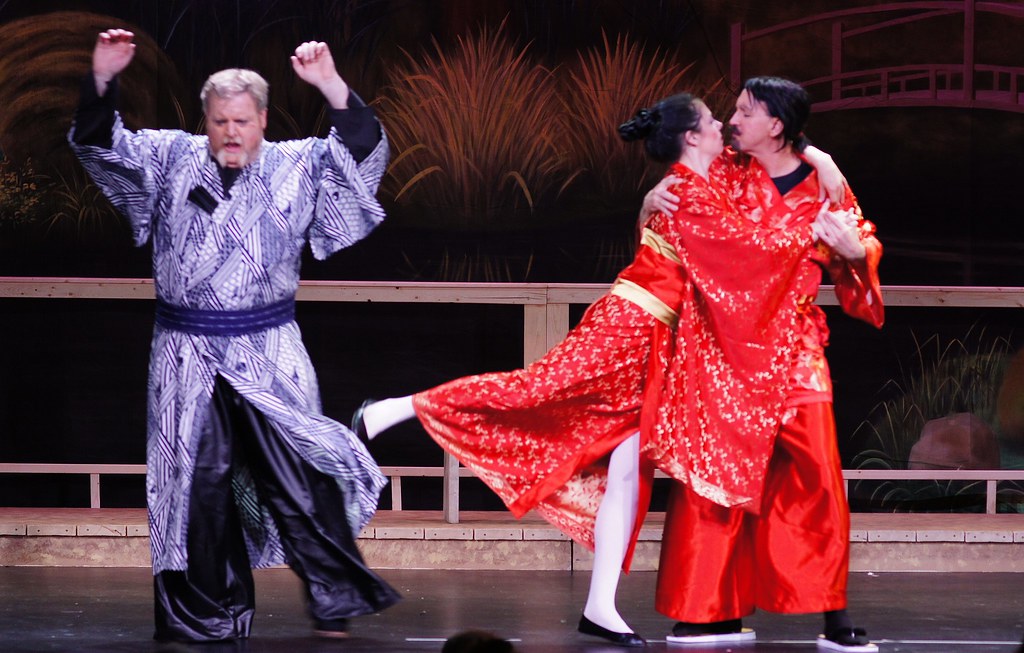 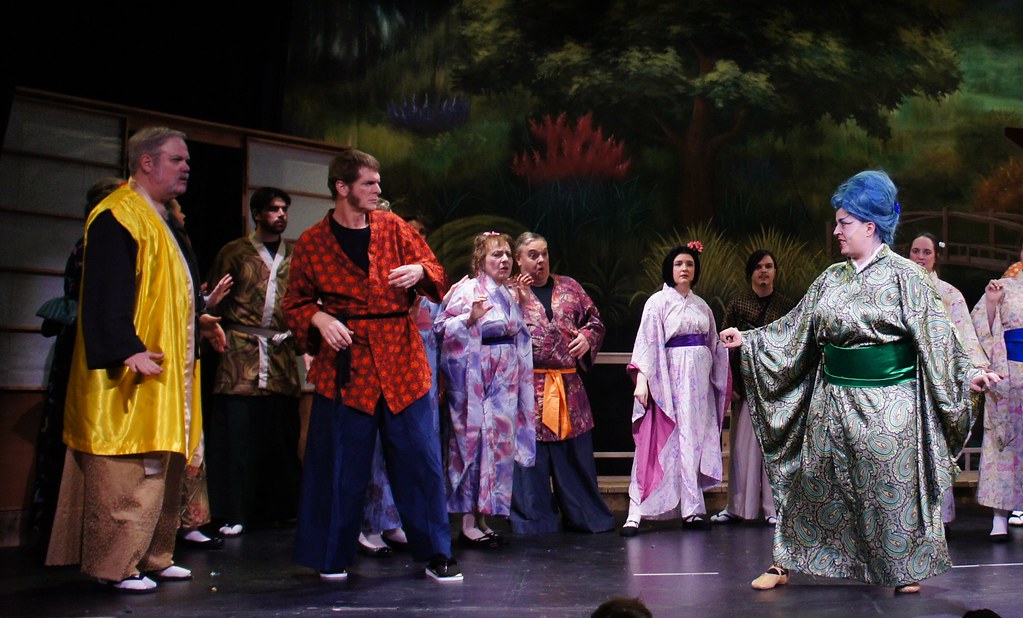 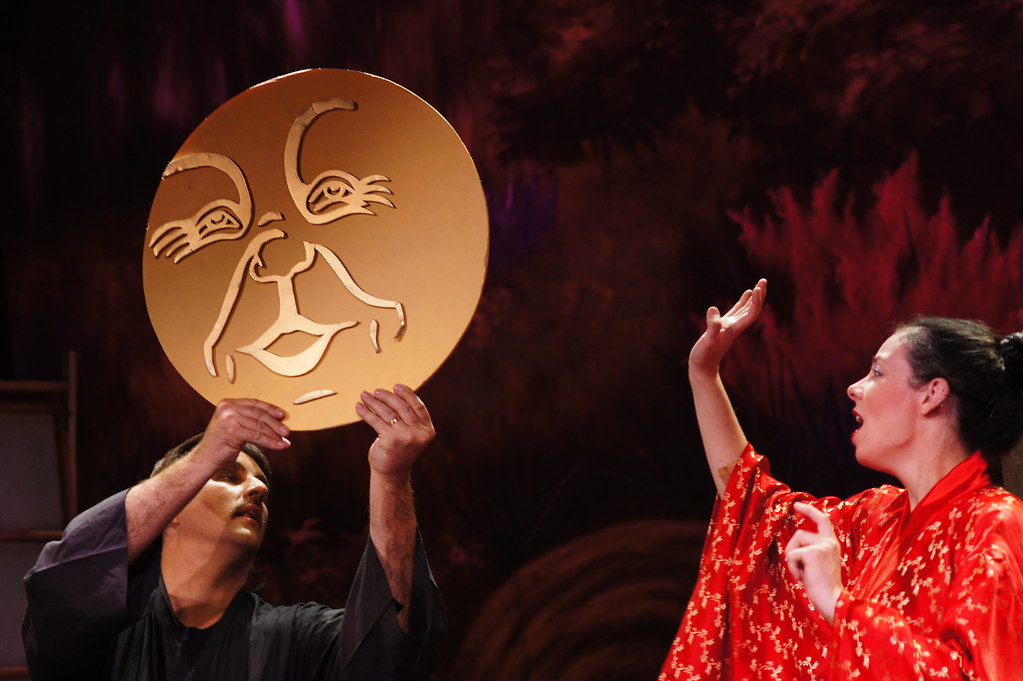 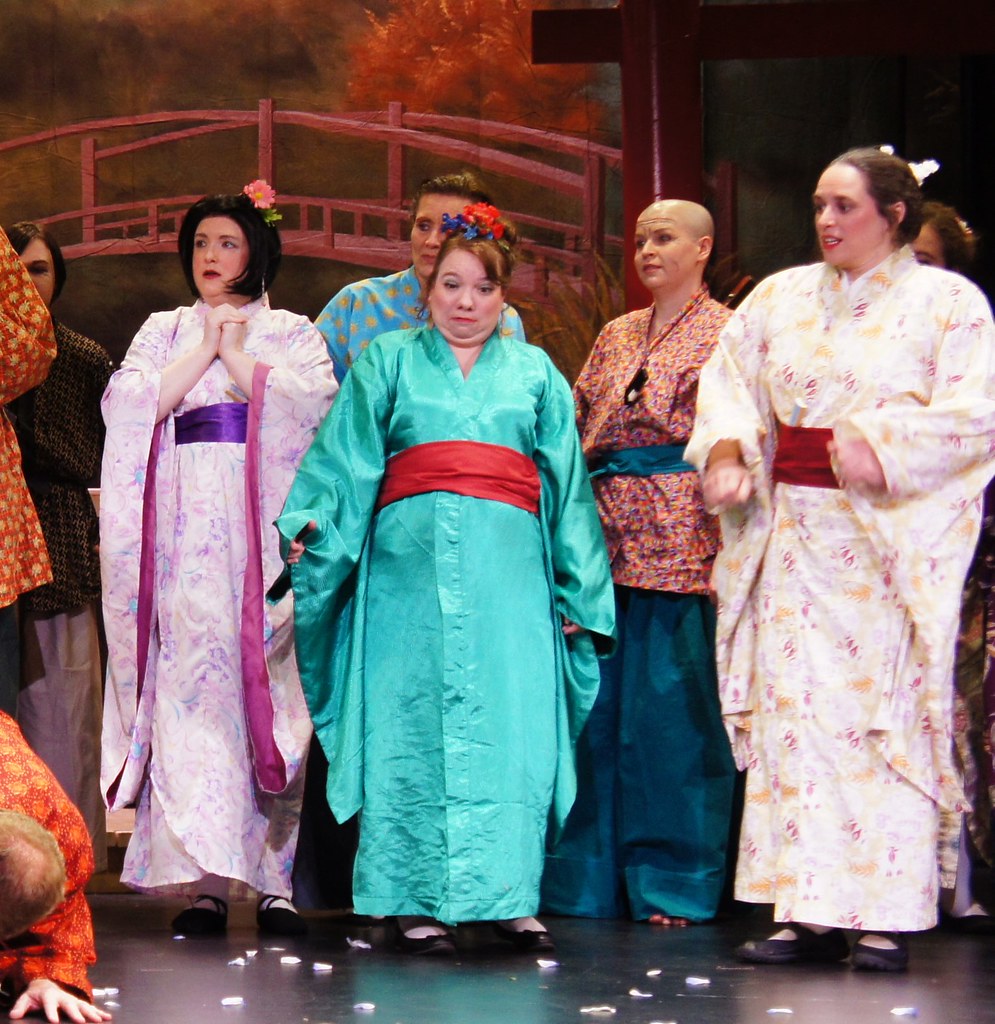 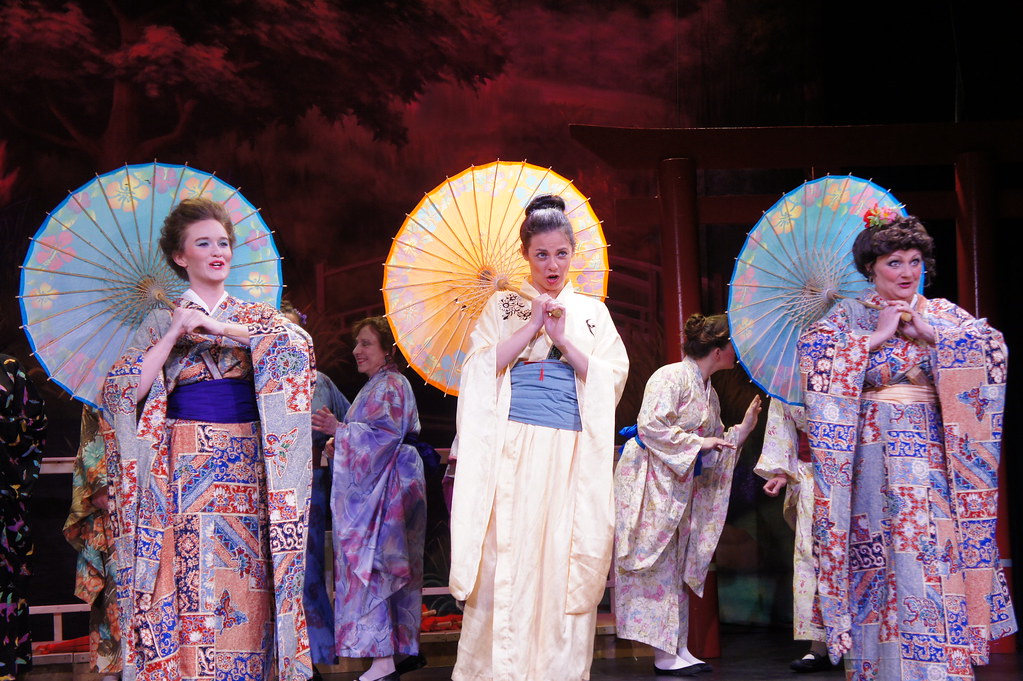 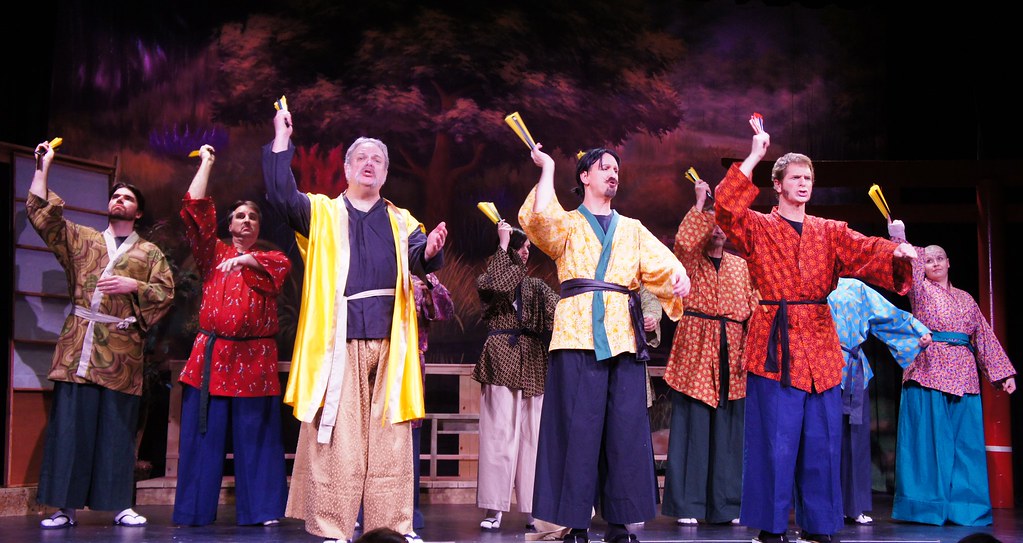 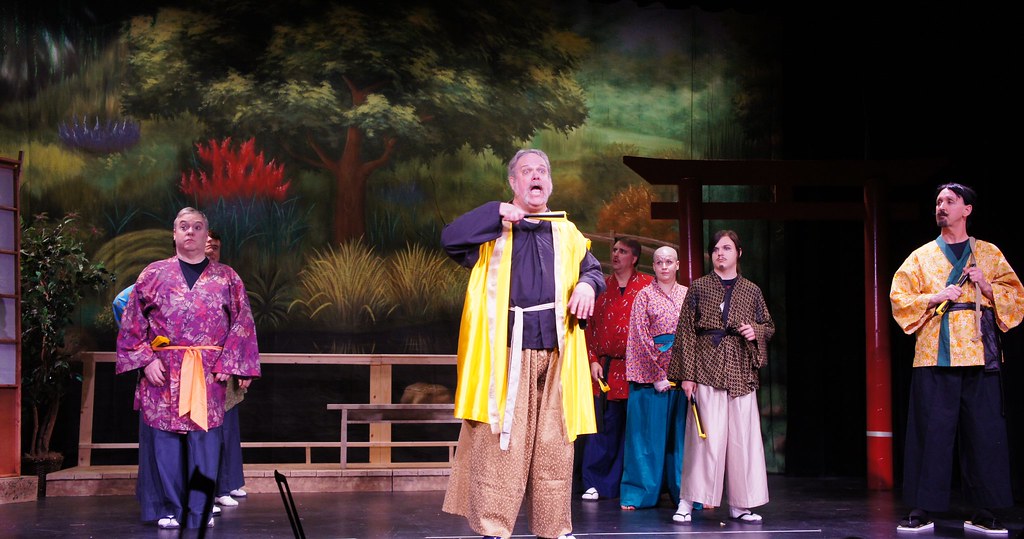 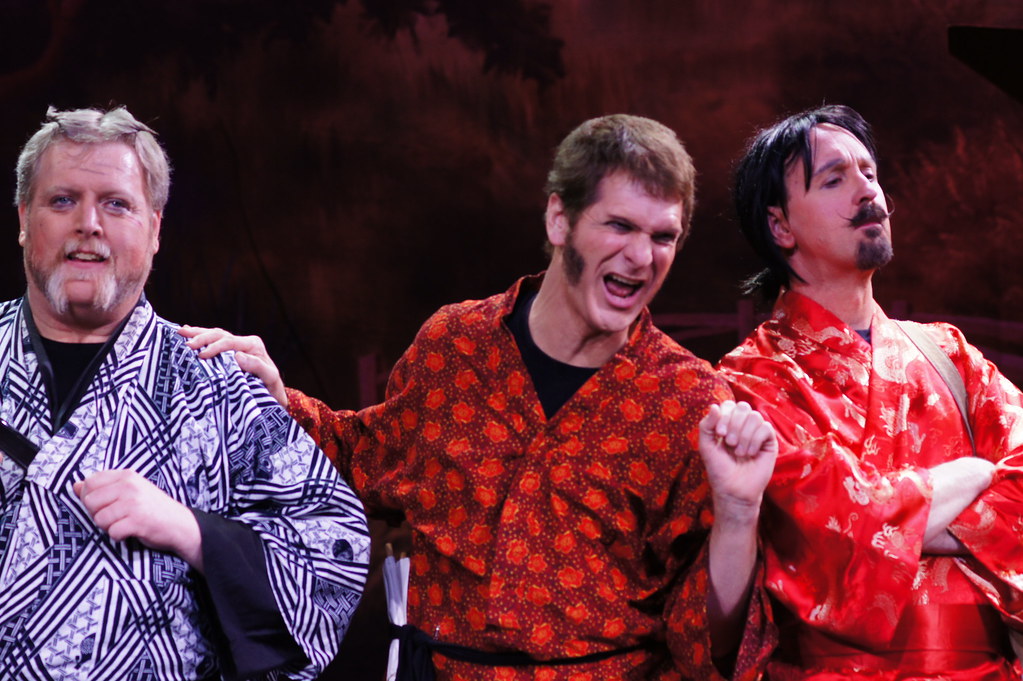 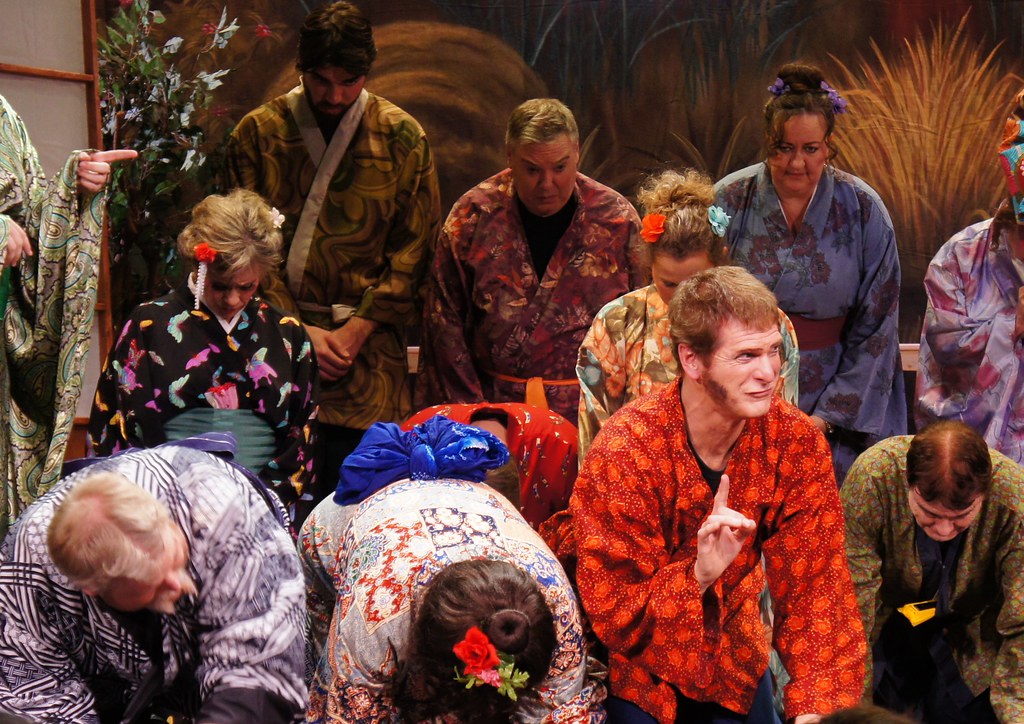 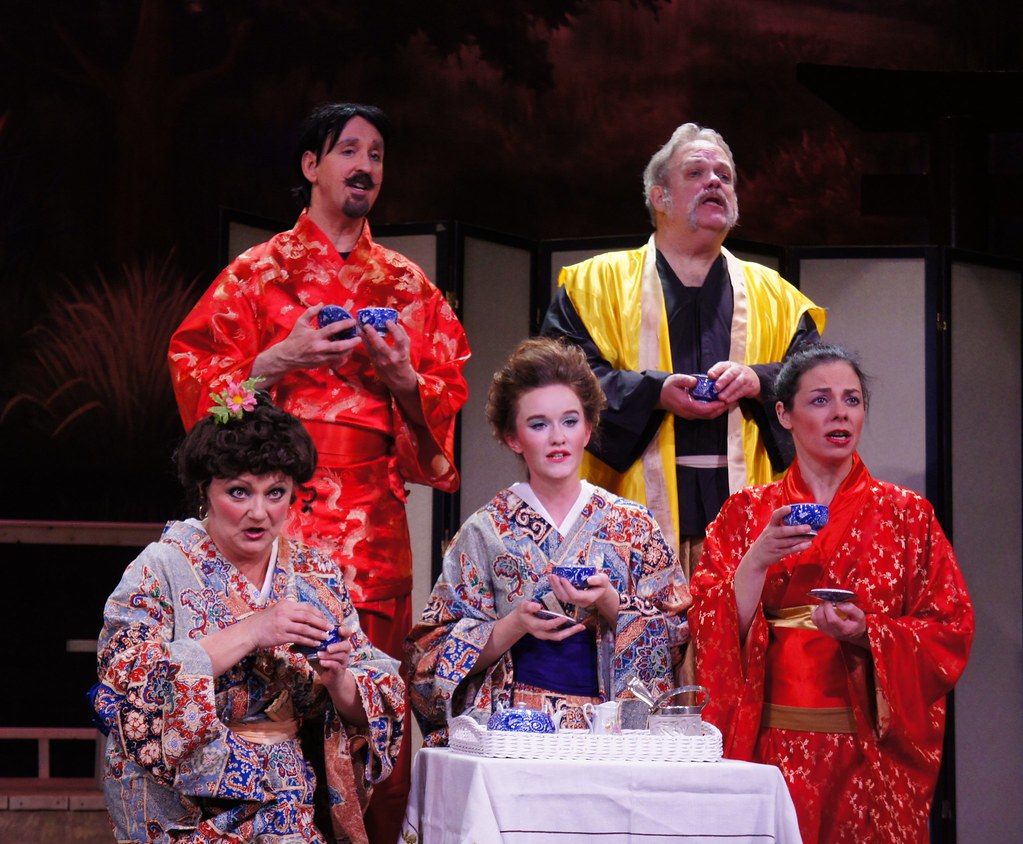 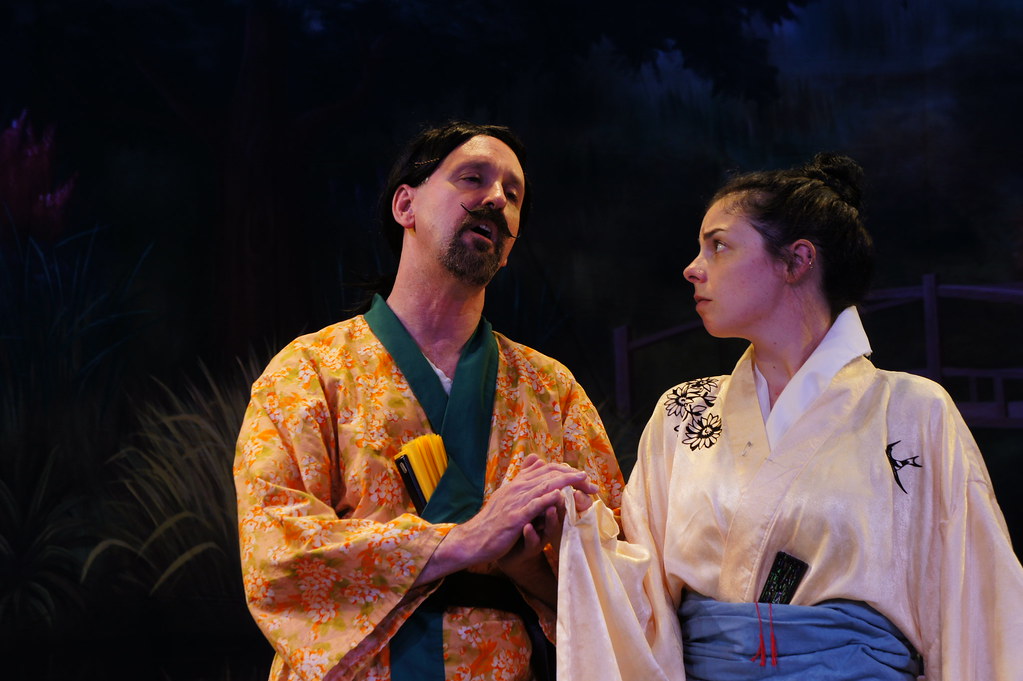 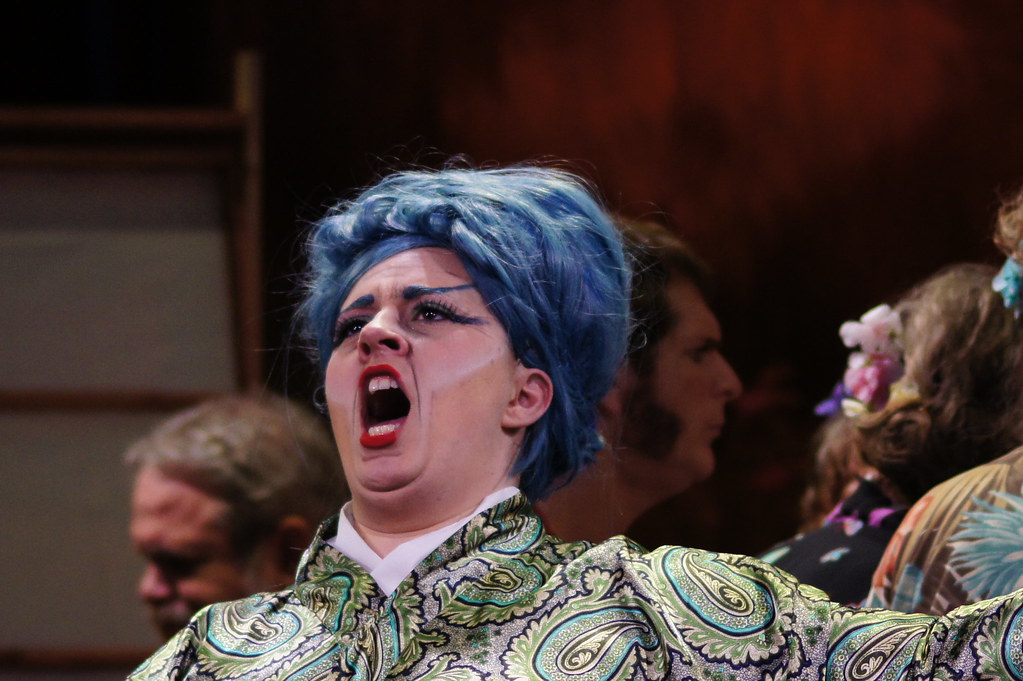 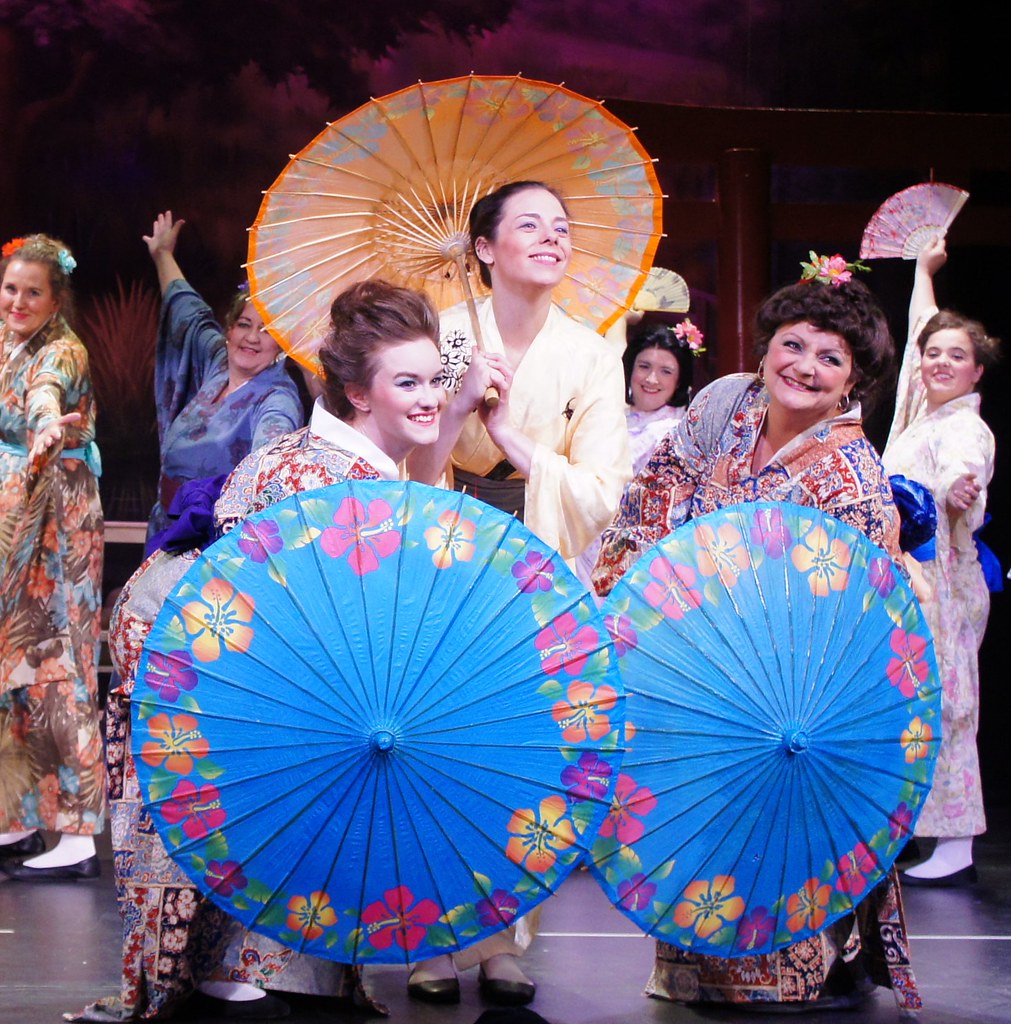 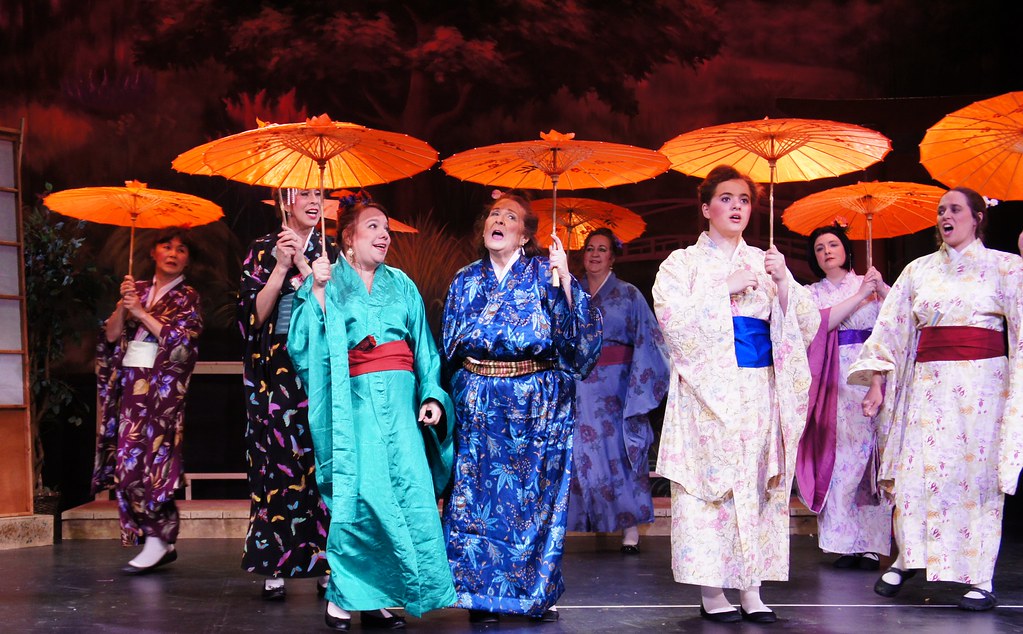 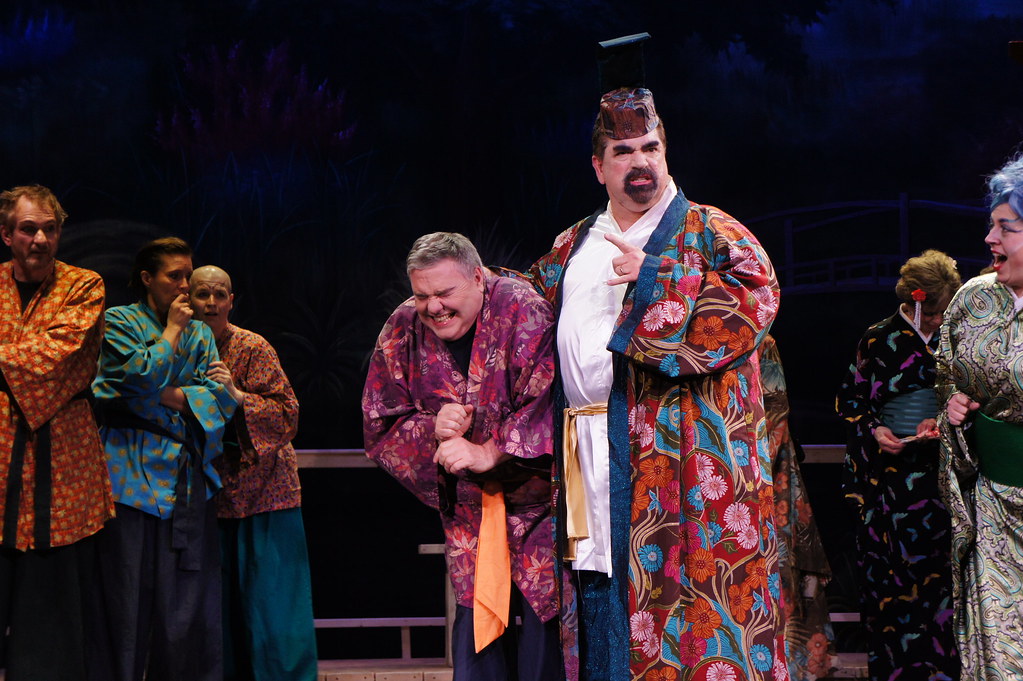 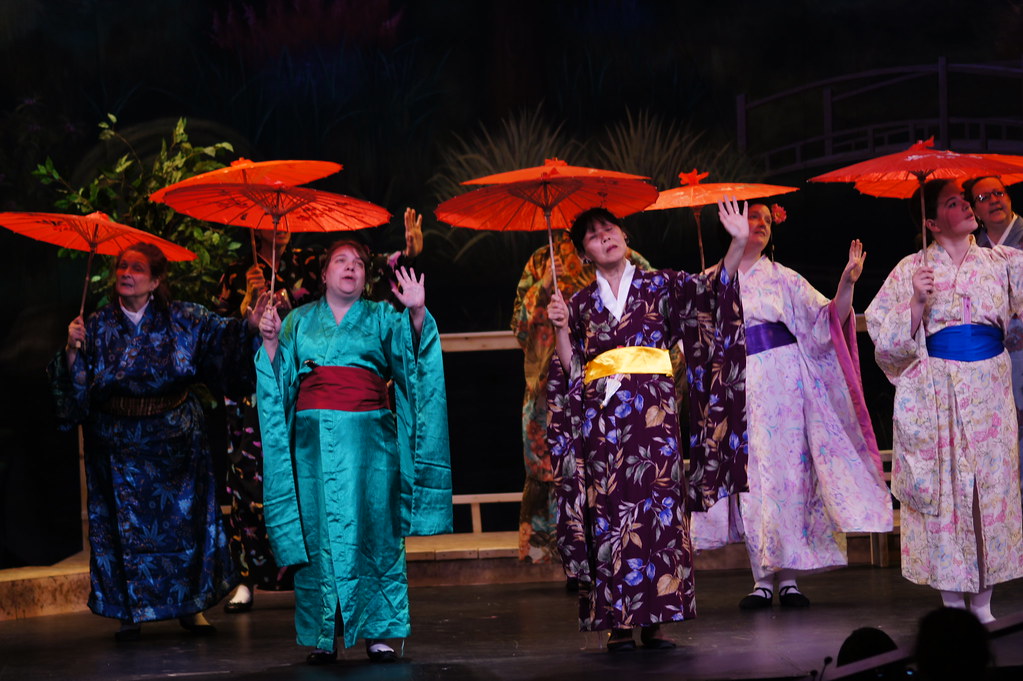 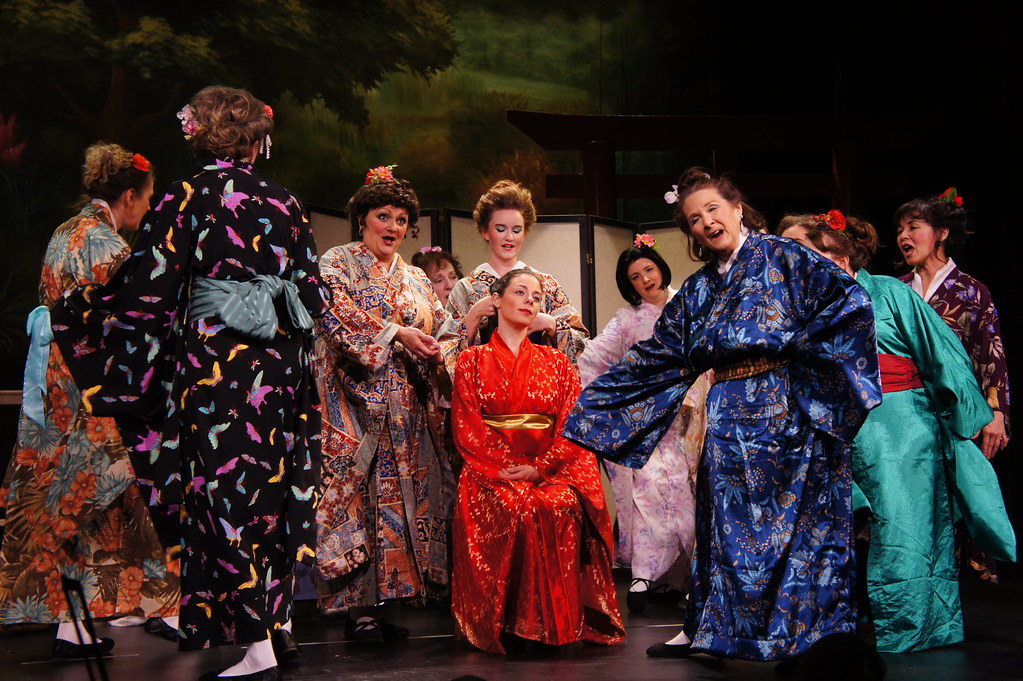 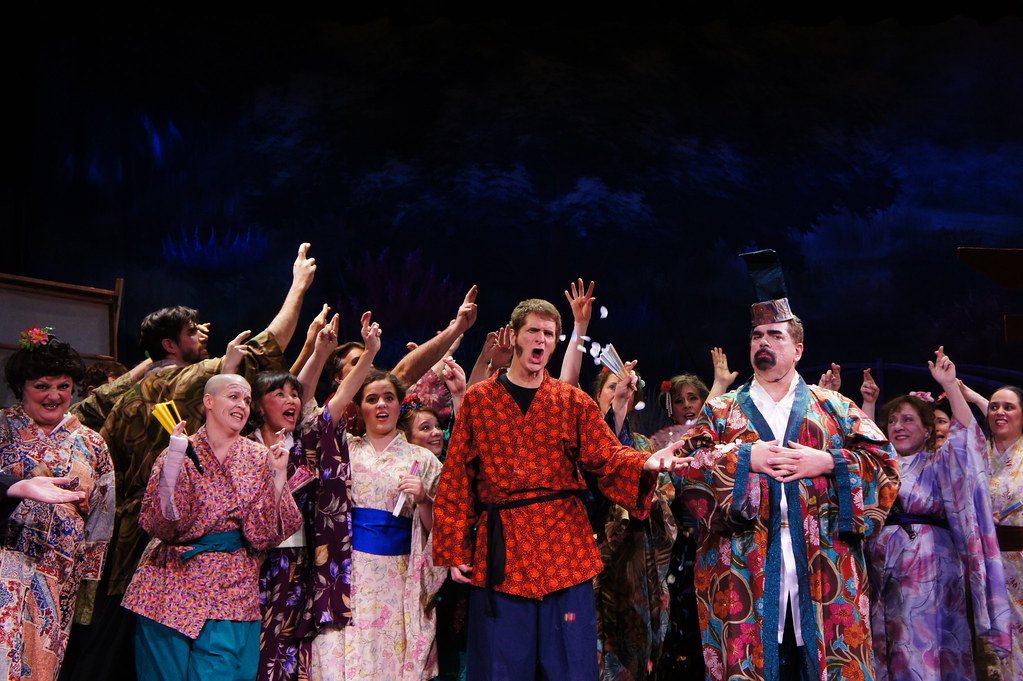 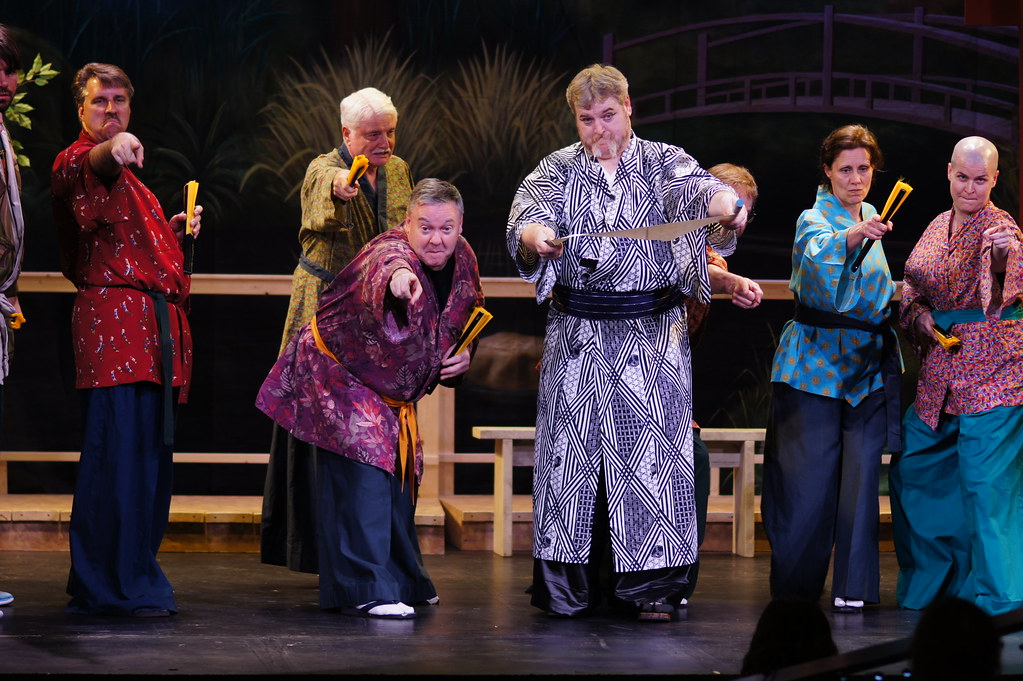 The show opens in the town of Titipu where the chorus of nobles are joined by Nanki-Poo, disguised as a second trombone, who is looking for Yum-Yum, the ward of Ko-Ko. A noble lord named Pish-Tush asks what Nanki-Poo’s business is with Yum-Yum, and learns that the minstrel had seen the girl a year ago when he was a member of the town band, and they had fallen in love. But Yum-Yum was betrothed to her guardian Ko-Ko, ‘a cheap tailor.’ However on learning that Ko-Ko was condemned to death for flirting, the minstrel has hurried back to try to claim Yum-Yum. Unfortunately on his return he finds that far from being dead, Ko-Ko has in fact been let out on bail, and appointed Lord High Executioner. There is worse to come as Pooh-Bah, who holds every major office of state, informs Nanki-Poo that Yum-Yum and Ko-Ko are to be married that very day.

Yum-Yum and her sisters, Pitti-Sing and Peep-Bo, appear with their schoolfellows. When Yum-Yum finally catches sight of Nanki-Poo he reveals that he is the son of the Mikado, and when they are alone, she admits she does not love her guardian. The two lovers realise that their cause is hopeless, and Yum-Yum leaves Nanki-Poo who then tries to kill himself. Meanwhile, Ko-Ko has received a letter from the Mikado, who threatens to abolish the post of Lord High Executioner and reduce Titipu to the rank of a village unless a beheading takes place within a month. On seeing Nanki-Poo about to ‘terminate an unendurable existence,’ Ko-Ko points out that suicide is a capital offence, and offers to do the job professionally. Nanki-Poo agrees, on the condition that he can Marry Yum-Yum and enjoy one month of married life before he is beheaded. After the execution Ko-Ko will then be able to marry the widowed Yum-Yum. Amidst the celebrations in storms Katisha, having tracked down the object of her affections, Nanki-Poo, and threatens to reveal his true identity. She is outshouted by a chorus of Japanese syllables: ” O ni! bikkuri shakkuri to!” (one of the many possible translations of which is “So surprised, we hiccup! Bah!”) . But the town dwellers are not to be deterred and ‘joy reigns everywhere around.’

Act two opens with Yum-Yum being prepared for her wedding. But soon the awful fact is out that under the Mikado’s law the widow of a beheaded man must be buried alive. This places Nanki-Poo in a dilemma, if he holds Yum-Yum to this marriage, she dies a hideous death, and if he releases her she must marry Ko-Ko at once. The marriage is off, and Nanki-Poo determines to do away with himself that afternoon unless Ko-Ko will kill him at once. But it turns out that Ko-Ko can’t kill anything. To make matters worse, the Mikado and his suite are approaching the town and will arrive in ten minutes. In desperation Ko-Ko arranges to draw up an affidavit of Nanki-Poo’s execution.

The Mikado arrives with Katisha who makes much of being his daughter-in-law elect. When Ko-Ko presents his certificate of execution. The Mikado reads it and says, ‘My poor fellow, in your anxiety to carry out my wishes you have beheaded the heir to the throne of Japan!’ Ko-Ko and Pooh-Bah find Nanki-Poo and beg him to present himself, alive, to his father, thereby absolving them of his death. But Nanki-Poo, now married to Yum-Yum, is afraid of Katisha’s wrath. Unless Ko-Ko will agree to marry the old hag himself, he and Yum-Yum will leave on their honeymoon at once. Katisha, meanwhile, is mourning the death of Nanki-Poo, and when Ko-Ko tries to woo her, she is at first reluctant, but he wins the formidable lady with a pack of flattering lies and a sad, lovelorn song.

Katisha adds her powerful pleas to the Mikado for everyone to be pardoned. The Mikado, a bit bewildered by it all nonetheless pronounces that ‘Nothing could possibly be more satisfactory!’