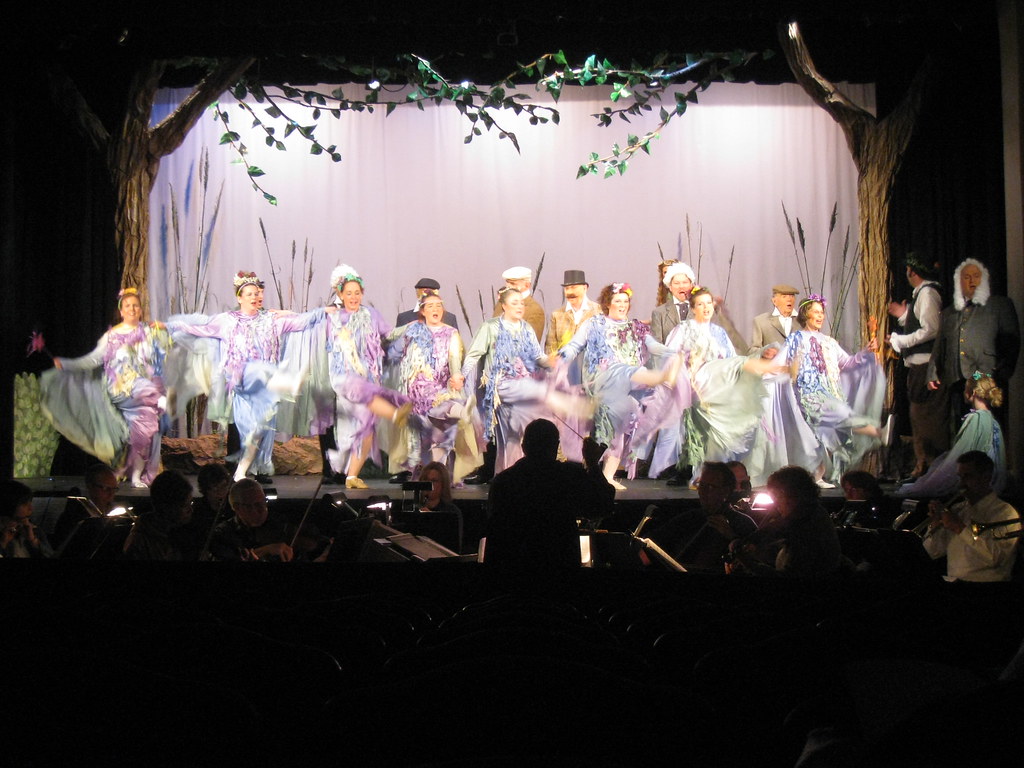 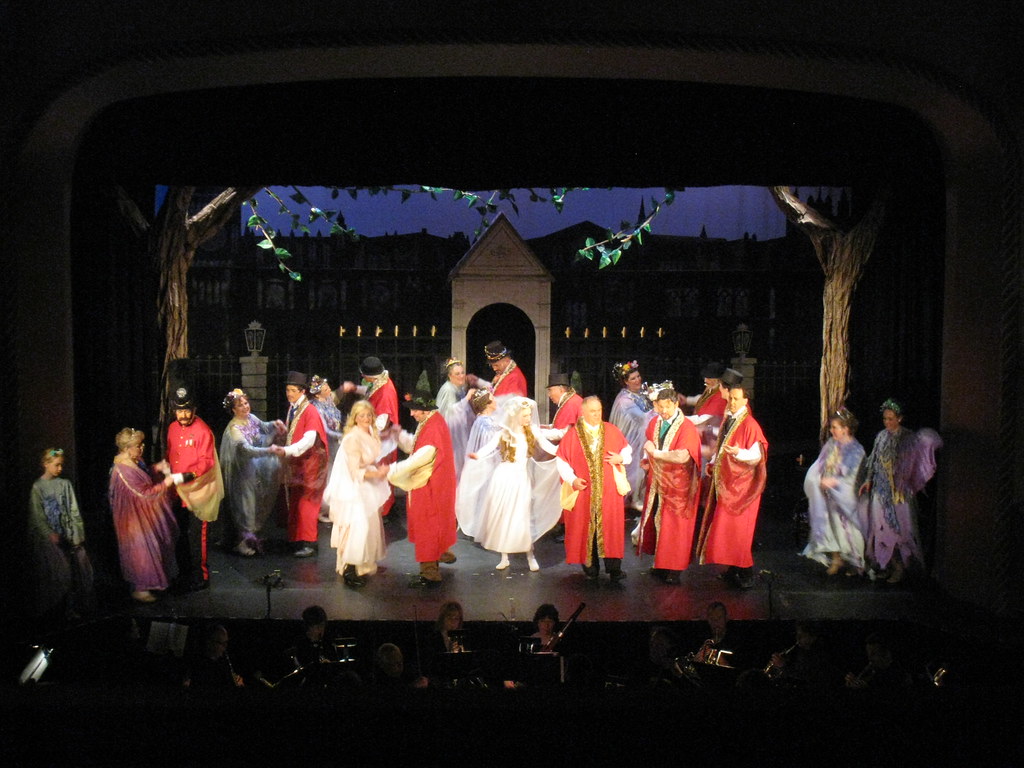 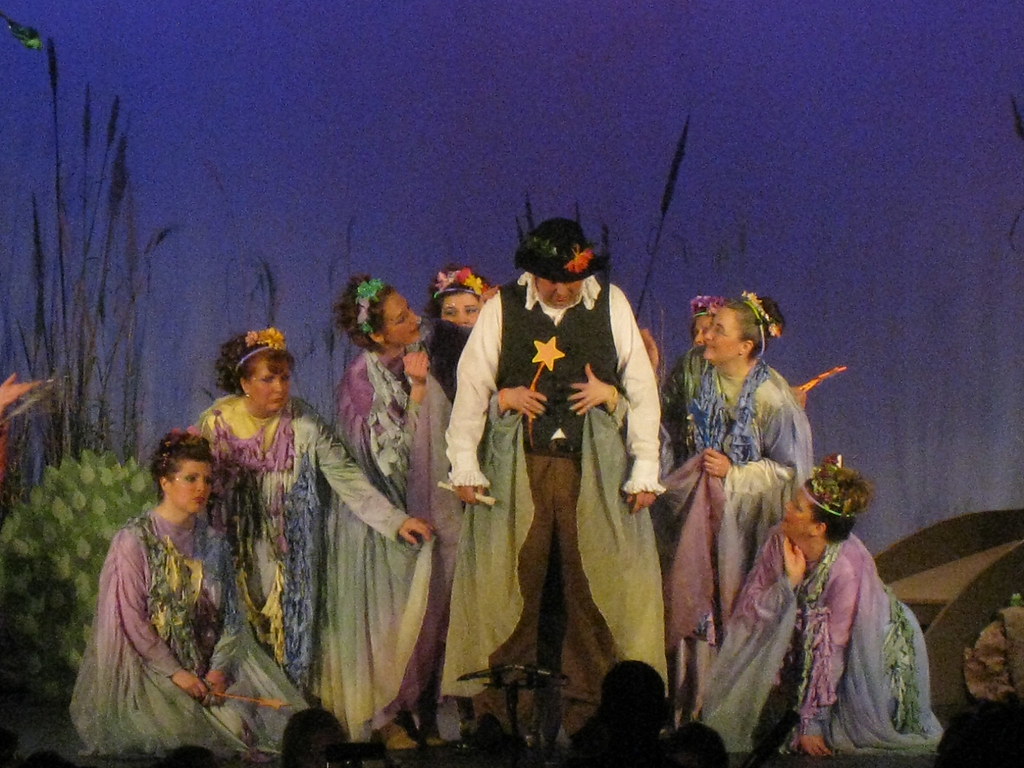 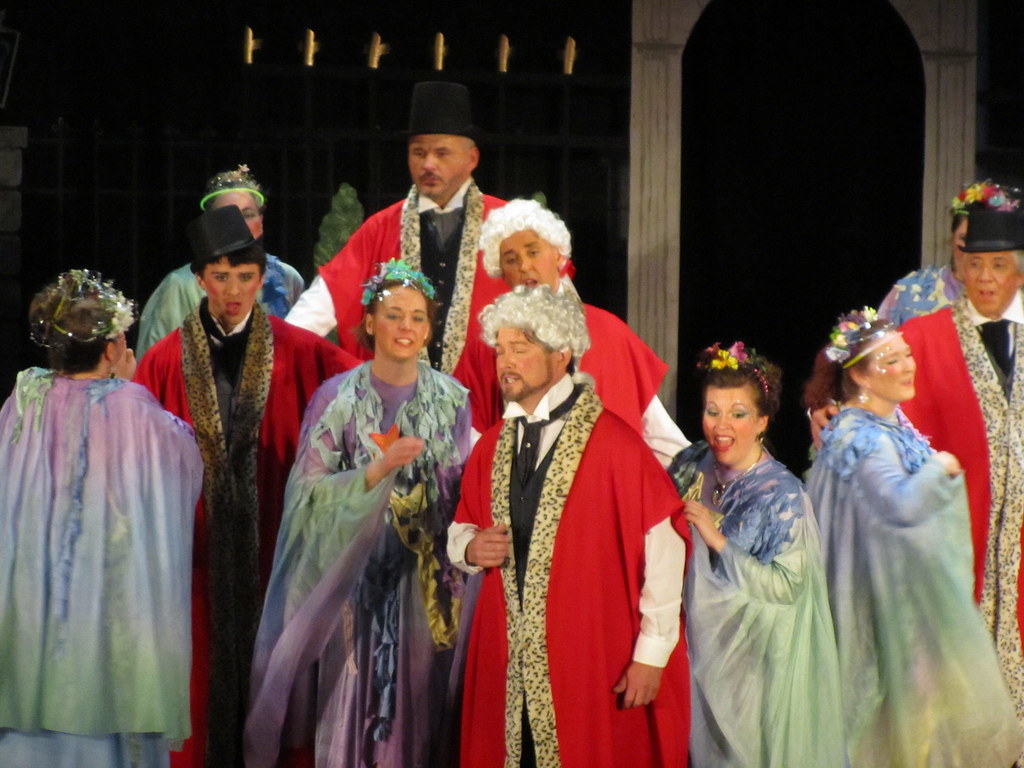 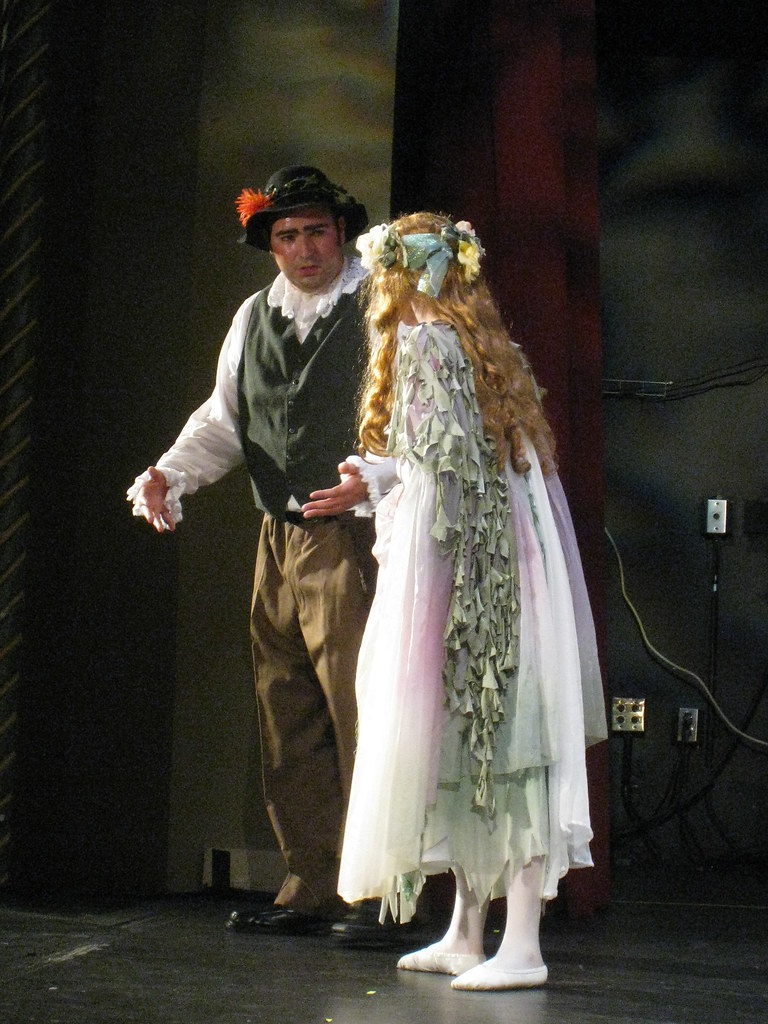 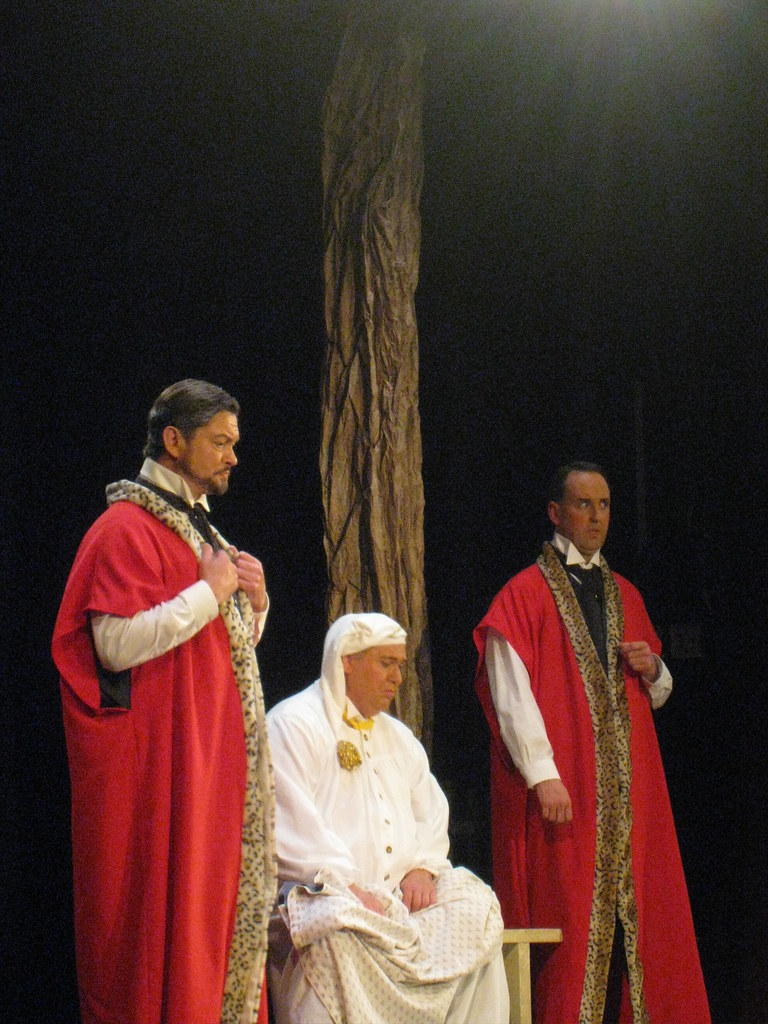 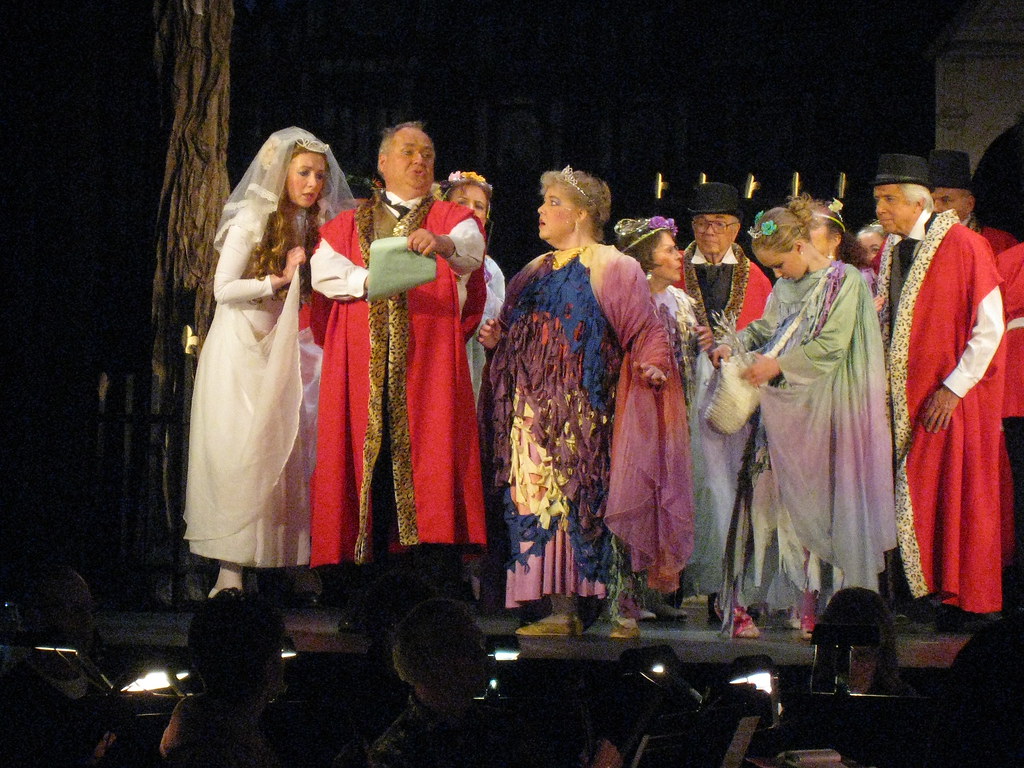 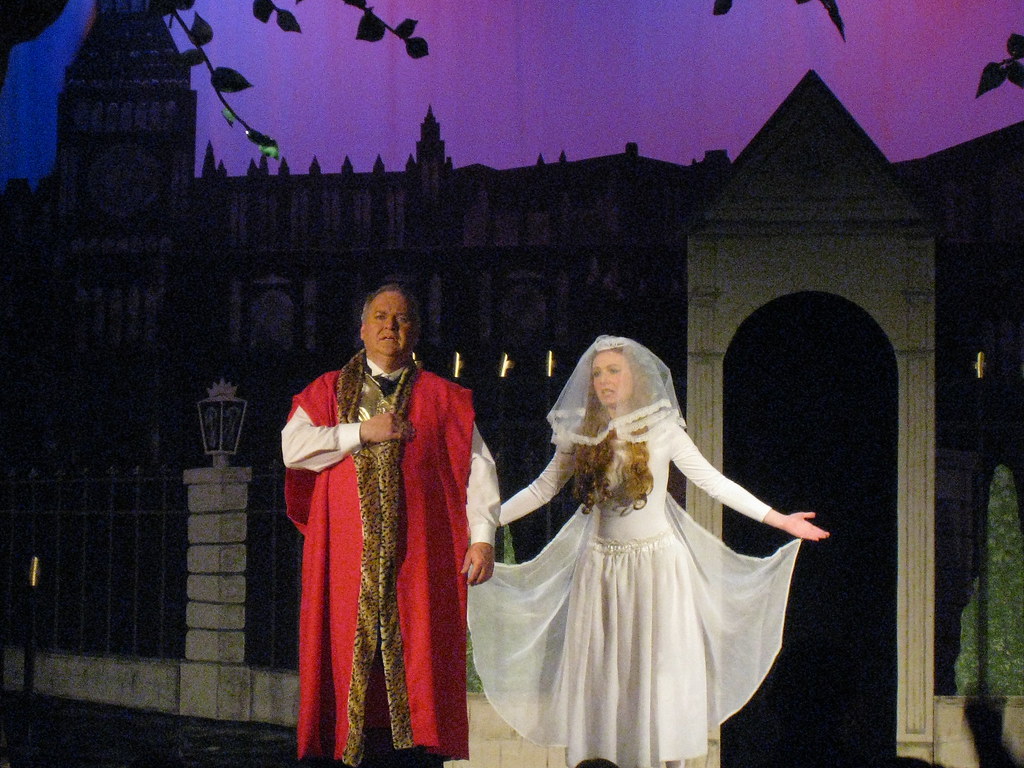 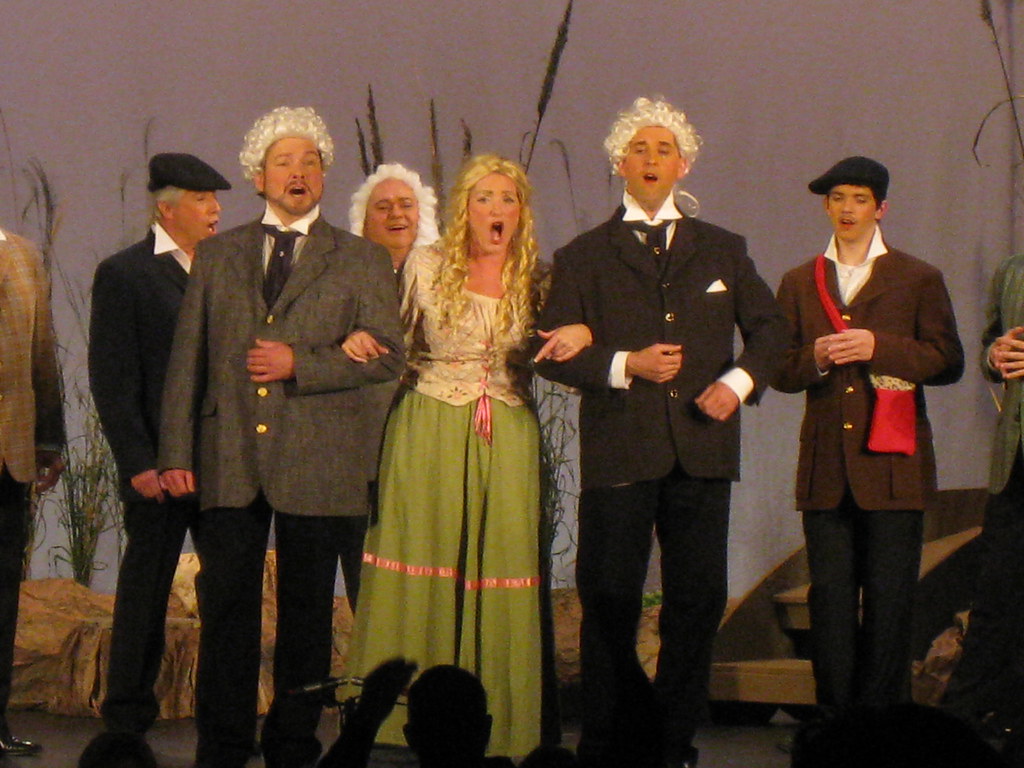 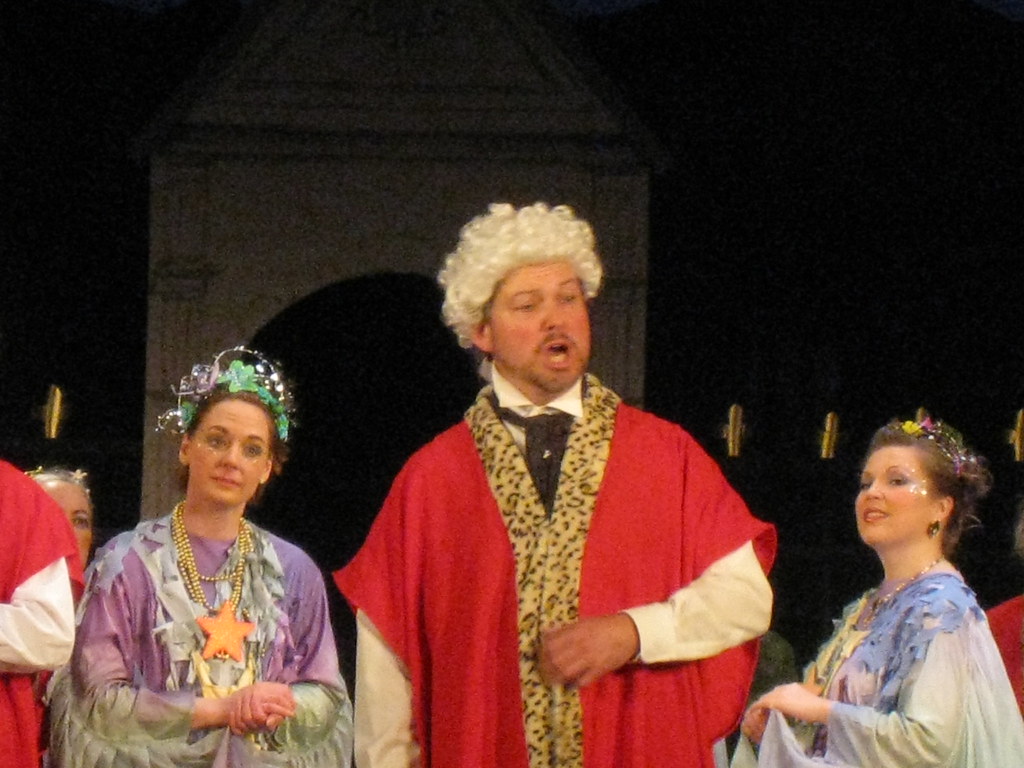 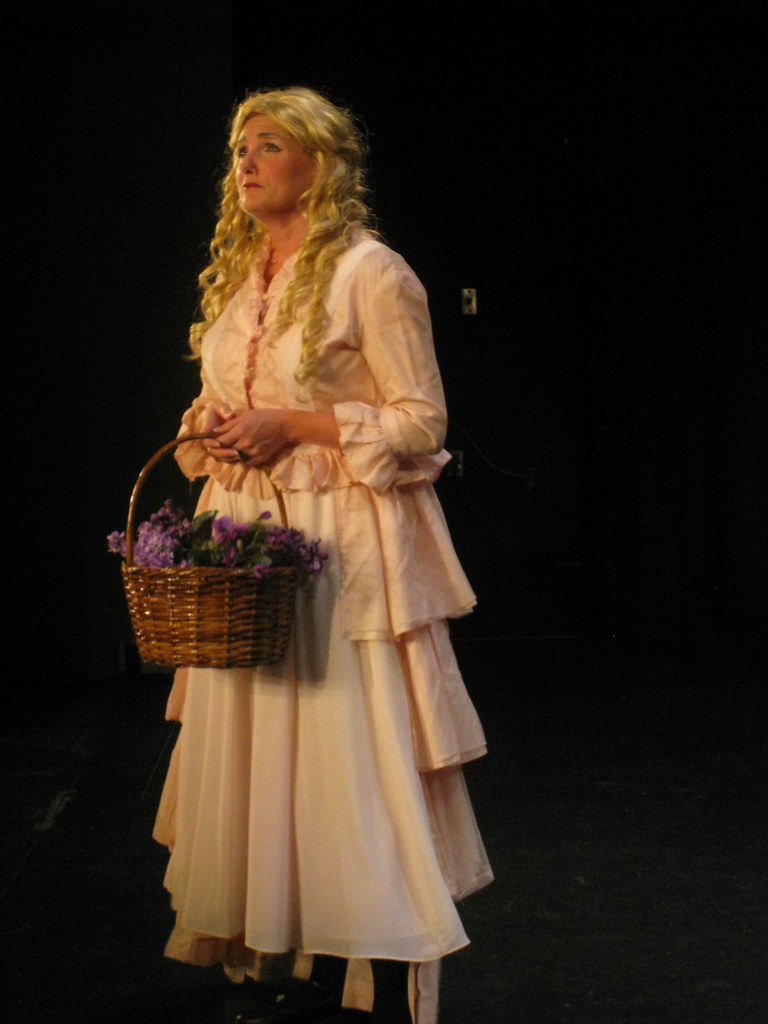 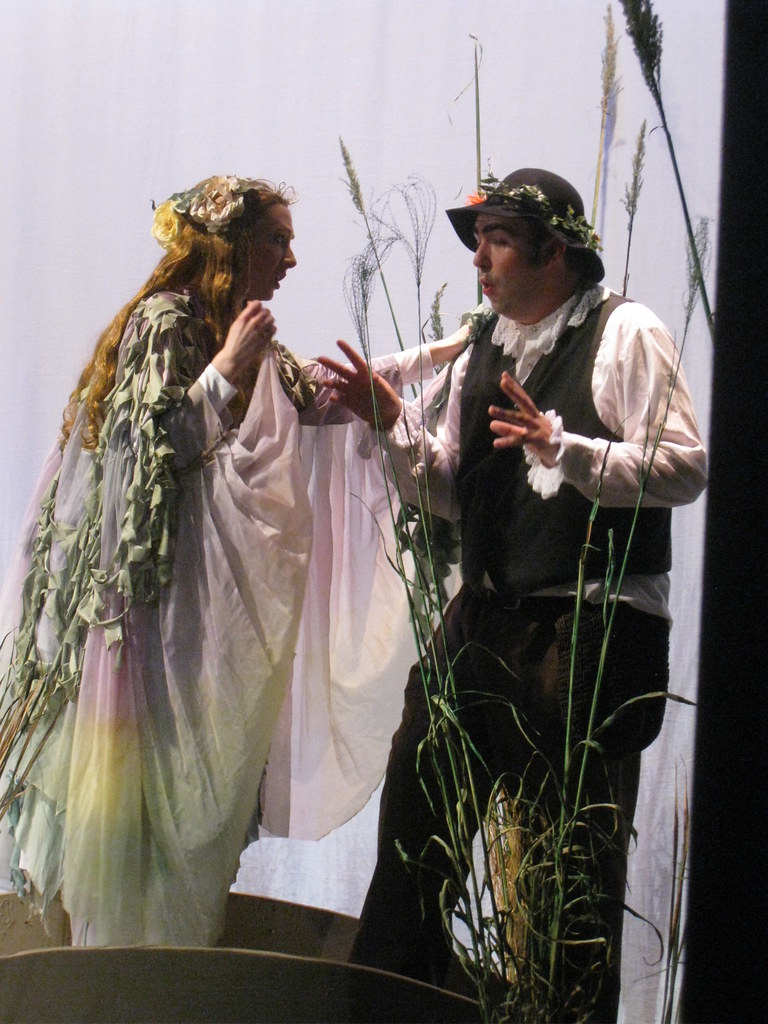 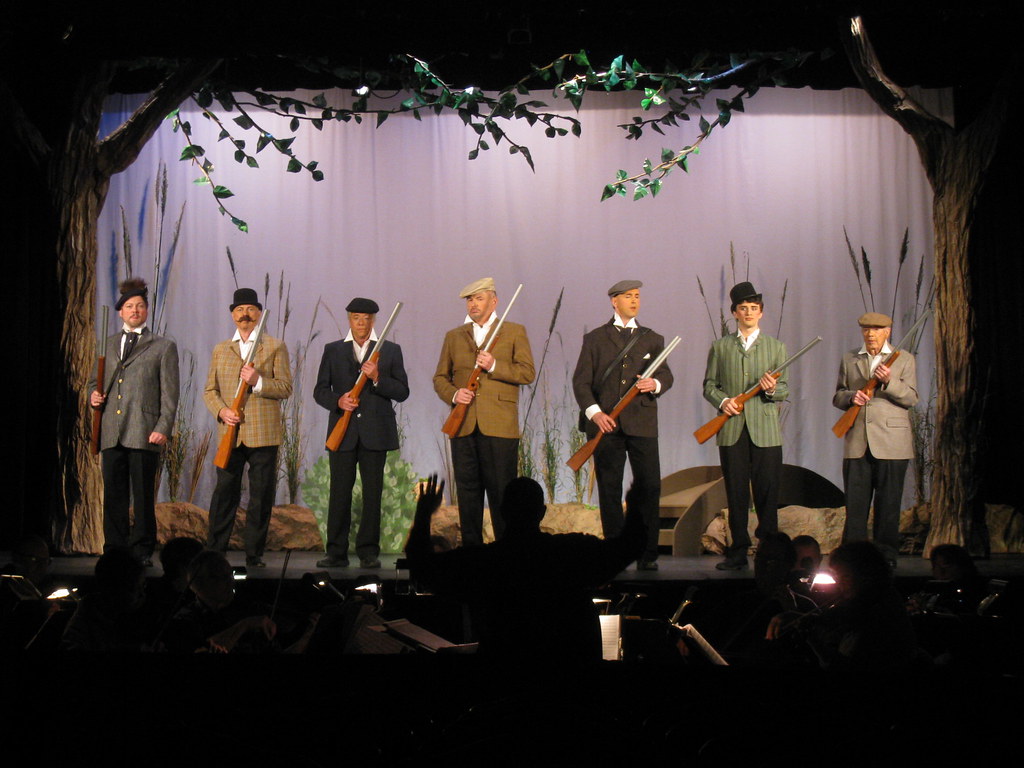 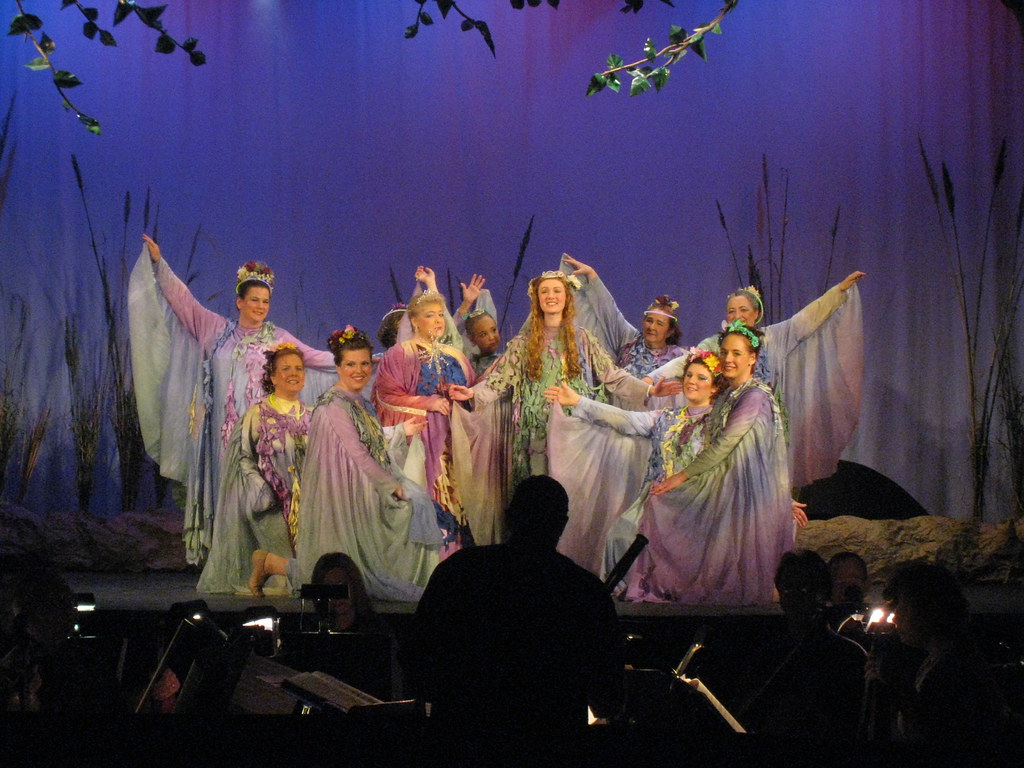 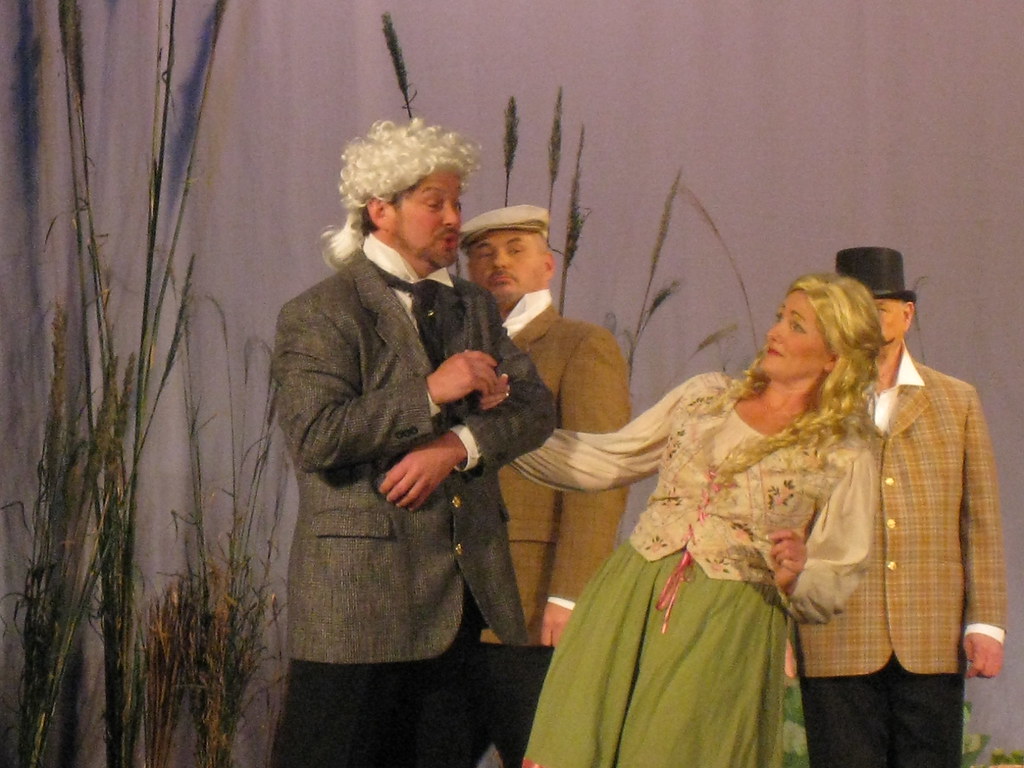 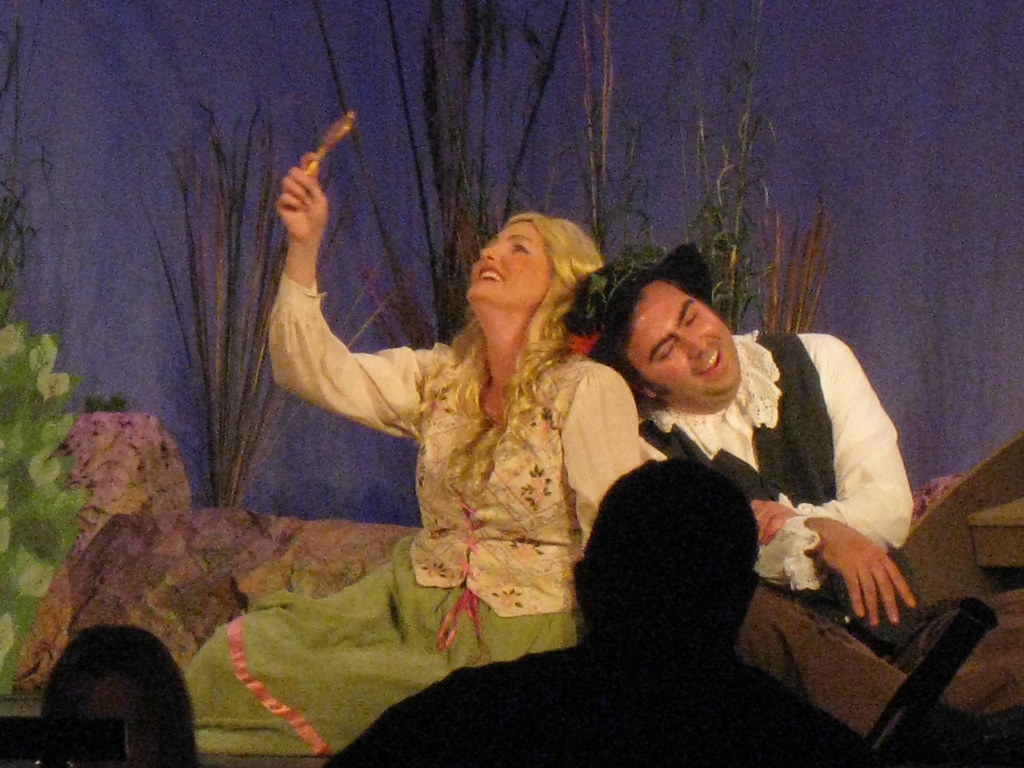 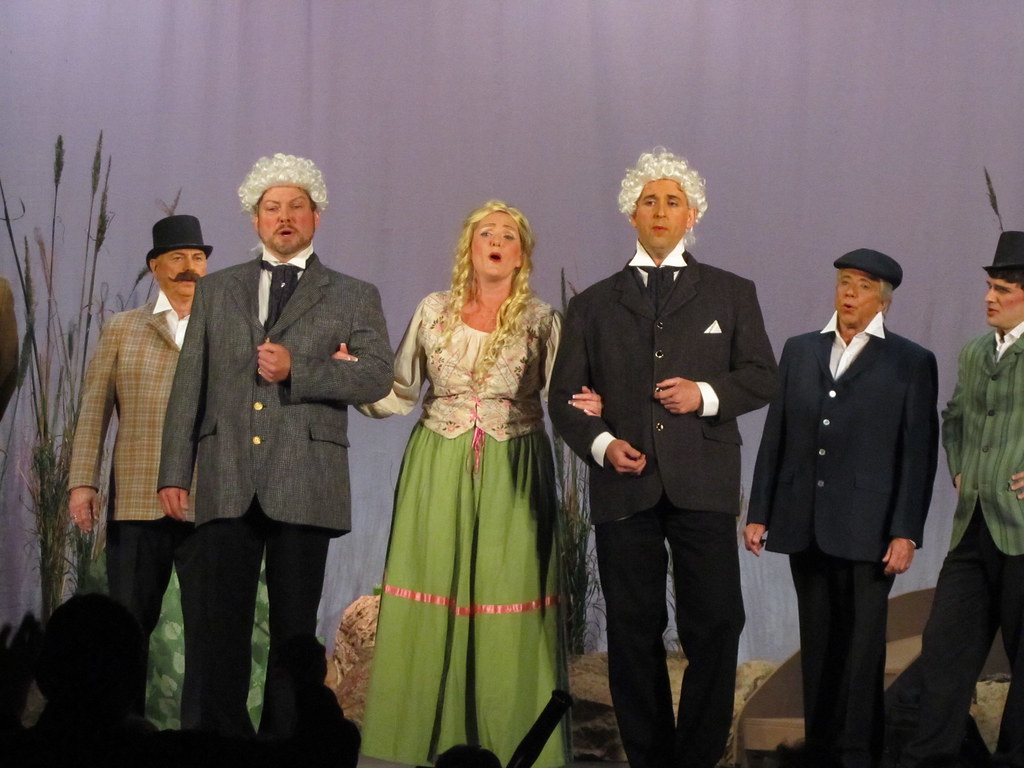 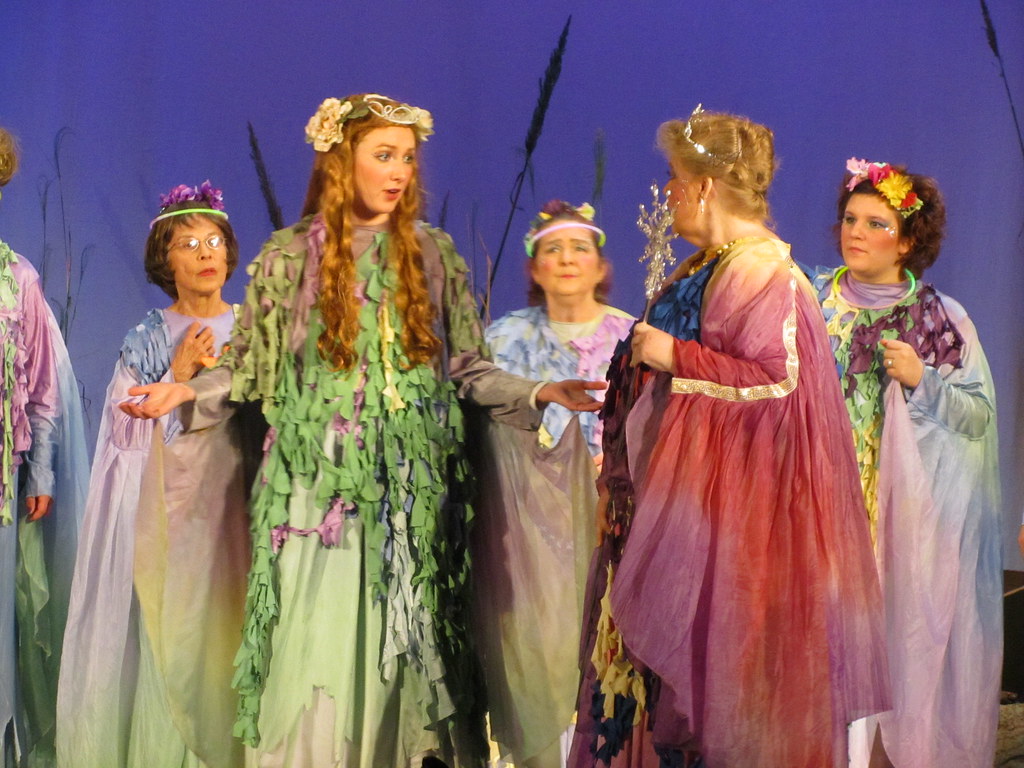 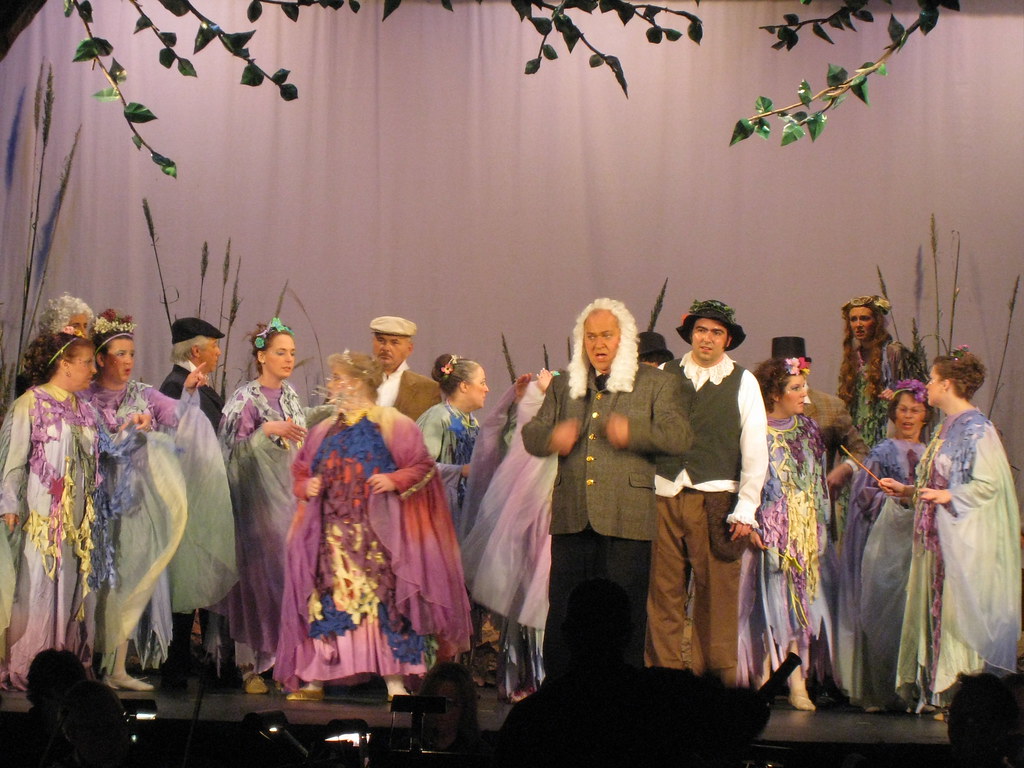 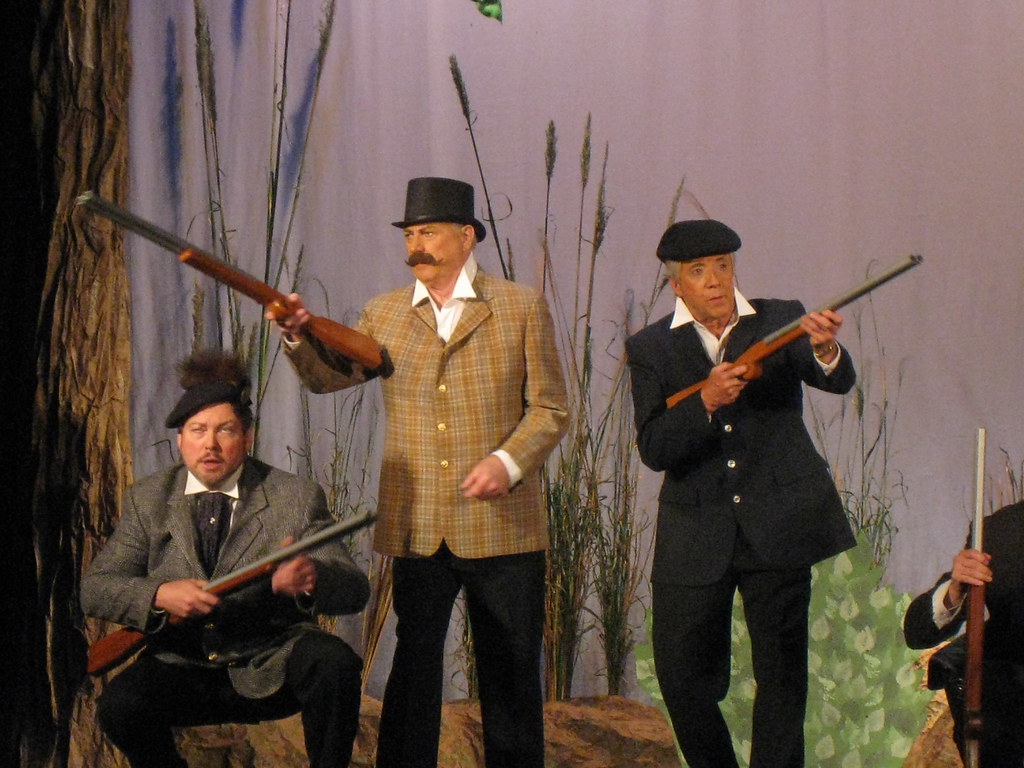 IOLANTHE was a Fairy – the life and soul of Fairyland. She wrote all the fairy songs and arranged the fairy dances. For twenty-five years Iolanthe has been in banishment. She had transgressed the fairy law by marrying a mortal, and it was only the Queen’s love which saved her from death.

When the curtain rises we witness a gathering of fairies, hear them sing one of Iolanthe’s songs, and see them trip her measures. They lament her absence and plead for her pardon. Compassion allied to curiosity impels the Queen to recall Iolanthe. For Iolanthe had chosen to dwell at the bottom of a stream, on whose banks we see the fairies disporting themselves. Rising from the pool, clad in water-weeds, Iolanthe receives the Royal pardon. Compassion having been exercised, curiosity demands satisfaction. The Queen enquires why Iolanthe should have chosen to live at the bottom of a stream. Iolanthe then reveals her secret. She has a son who was born shortly after her banishment, and she wished to be near him. The Queen and the other fairies are deeply interested, and just as the Queen is expressing her desire to see the “half-fairy, half-mortal” Arcadian shepherd, Strephon, he dances up to Iolanthe, and with song and pipe urges her to rejoice because “I’m to be married to-day.” Iolanthe tells Strephon that she has been pardoned, and presents Strephon to the Queen and to her fairy sisters. “My aunts!” exclaimed Strephon with obvious delight.

Strephon explains the peculiar difficulties consequent on being only half a fairy, and the Queen promises that henceforward the fairies will always be ready to come to his aid should be he in “doubt or danger, peril or perplexitee.” Strephon is now joined by Phyllis – a beautiful ward of Chancery and his bride-elect. In the prelude to one of the most delightful love-songs ever written, Phyllis reveals her fear of the consequences which may fall upon Strephon for marrying her without the consent of the Lord Chancellor, and Strephon demonstrates that his fairy ancestry has not freed him from the pangs of jealousy.

We now witness the entrance and march of the peers in their gorgeous robes, to the strains of magnificent music, ending with a chorus which is assumed to embody the traditional attitude of the peers to the people :

The Lord Chancellor enters at the conclusion of this chorus, and after a song upon his responsibilities as “The constitutional guardian I, of pretty young wards in Chancery,” he announces that the business before the House concerns the disposal of the hand of Phyllis, a Ward of Court. All the peers have fallen in love with her and wish the Lord Chancellor to bestow her upon the one whom she may select. The Lord Chancellor confesses to being “singularly attracted by this young person” and laments that his judicial position prevents him from awarding her to himself. Phyllis arrives, and after being proposed to by Lord Tolloller and Lord Mount-Ararat, the whole of the peers invite her acceptance of their coronets and hearts. Phyllis tells them that already “her heart is given.” The Lord Chancellor indignantly demands the name of her lover. Before Phyllis can reply, Strephon opportunely enters the “House” and claims “his darling’s hand.” The peers depart, dignified and stately, with haughty and disdainful glances upon the lovers.

The glee with which Strephon and Phyllis have regarded their departure is suddenly ended by the wrathful “Now, sir!” of the Lord Chancellor, who separates the lovers and bids Phyllis depart. His severe and sarcastic admonitions leave Strephon lamenting. Iolanthe returns to find her son in tears. As she tenderly consoles him, Phyllis stealthily re-enters escorted by the peers. Knowing nothing of her lover’s fairy origin, and seeing him embracing one who appears equally young and beautiful as herself, she breaks from the hands of the peers just as Iolanthe and Strephon are parting, and accuses the latter of shameless deceit. Strephon’s explanation that “this lady’s my mother” is disbelieved by Phyllis and greeted with derision by the peers, who decline to admit that “a maid of seventeen” can be the mother of “a man of four or five-and-twenty.” Believing herself to have been deceived by Strephon, Phyllis now ruefully offers to accept either Tolloller or Mount-Ararat, but doesn’t care which. Just as she has placed the noble lords in this quandary, Strephon re-appears, and invokes the aid of the Fairy Queen. Instantaneously the fairy band are seen “tripping hither, tripping thither” among the amazed peers, while the slender Lord Chancellor encounters a rude shock when he collides with the massive form of the Queen. Strephon tells his tale of woe, and there follows an amazing and amusing exchange of reproach and ridicule. The infuriated Queen determines to punish the peers. Strephon shall go into Parliament to wreak vengeance on them. The recital of the measures which he is to carry through Parliament alarms the peers, and the first Act ends, after a pretence at defiance, in their vainly suing for mercy.

The second Act of “Iolanthe” is staged in the Palace Yard at Westminster. A solitary sentry is discovered moralising upon the proceedings in “that House.”

He has observed that if the members have :

“A brain and cerebellum, too,
They’ve got to leave that brain outside
And vote just as their leaders tell ’em to.”

Presently the fairies reappear and rejoice over Strephon’s success as a member of Parliament. Then the peers enter and reveal their annoyance with Strephon, whom they describe as “a Parliamentary Pickford – he carries everything.” A heated argument ensues between the fairies and the peers. It is ended by a song from Mount-Ararat in praise of the House of Peers, which sparkles with satire on the members of that ancient institution, who make “no pretence to intellectual eminence or scholarship sublime.”

Having pleaded in vain that the fairies should prevent Strephon from doing further mischief, they depart in anger, and the Queen enters to find her band gazing wistfully after them. Scenting danger, the Queen calls upon them to subdue this “weakness.” Celia retorts that “the weakness is so strong.” The Queen replies by protesting that, although she herself is not “insensible to the effect of manly beauty” in the person of the stalwart Guardsman still on sentry-go, she is able to subdue her feelings, though in the famous “Captain Shaw” song which follows she asks :

“Could thy Brigade
With cold cascade
Quench my great love, I wonder?”

Phyllis now re-appears, seeming very unhappy, and is presently joined by Tolloller and Mount-Ararat, who wrangle as to which shall yield her to the other. Phyllis implores them not to fight for her. “It is not worth while,” she declares, and after a moment’s reflection they agree that “the sacred ties of friendship are paramount.” Following the departure of the trio there enters the Lord Chancellor looking dejected and very miserable. He, too, it will be remembered, had fallen in love with Phyllis, and he now mourns aloud that “love unrequited robs him of his rest.” Mount-Ararat and Tolloller join him and express their concern at his woe-begone appearance. He explains, and they persuade him to make another application to himself for permission to marry Phyllis. Then Phyllis and Strephon encounter each other in the Palace Square. Taunted by a reference to his “young” mother, Strephon discloses that she is a fairy. This leads to a reconciliation. Iolanthe joins them, and when they ask her to appeal to the Lord Chancellor for his consent to their marriage, she reveals the secret of her life. The Lord Chancellor is her husband! He thinks her dead, and she is bound under penalty of death not to undeceive him. The Lord Chancellor enters exclaiming “Victory! victory!” In the highest spirits he relates how he had wrested from himself permission to marry Phyllis. Then Iolanthe, still hiding her identity, pleads Strephon’s cause. When he refuses her plea, she determines to gain happiness for her son even at the cost of her own life. Despite the warning song of her fairy sisters, Iolanthe shocks the Chancellor with the words, “It may not be – I am thy wife.”

The Fairy Queen breaks in upon this tragic episode with the threat of Iolanthe’s doom, but ere it can be pronounced the Fairy Leila tells the Queen that if Iolanthe must die so must they all, for all have married peers. Bewildered by this dilemma the Fairy Queen is greatly relieved when the Lord Chancellor suggests that instead of the fairy law reading “Every fairy must die who marries a mortal” it should be “Every fairy must die who don’t marry a mortal.” Accepting the suggestion the Queen finds her own life in peril. She proposes to the stalwart Grenadier still on duty, who gallantly accepts. The peers also agree to exchange the “House of Peers for House of Peris.” Wings spring from their shoulders and away they all fly, “Up in the sky, ever so high,” where “pleasures come in endless series.”