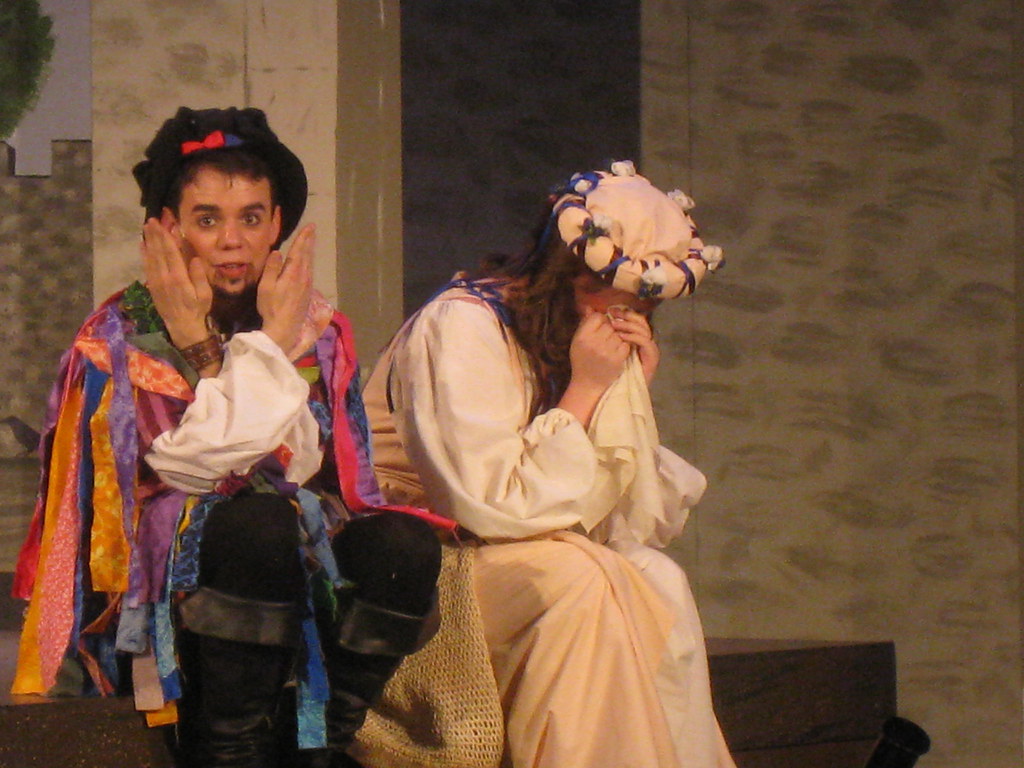 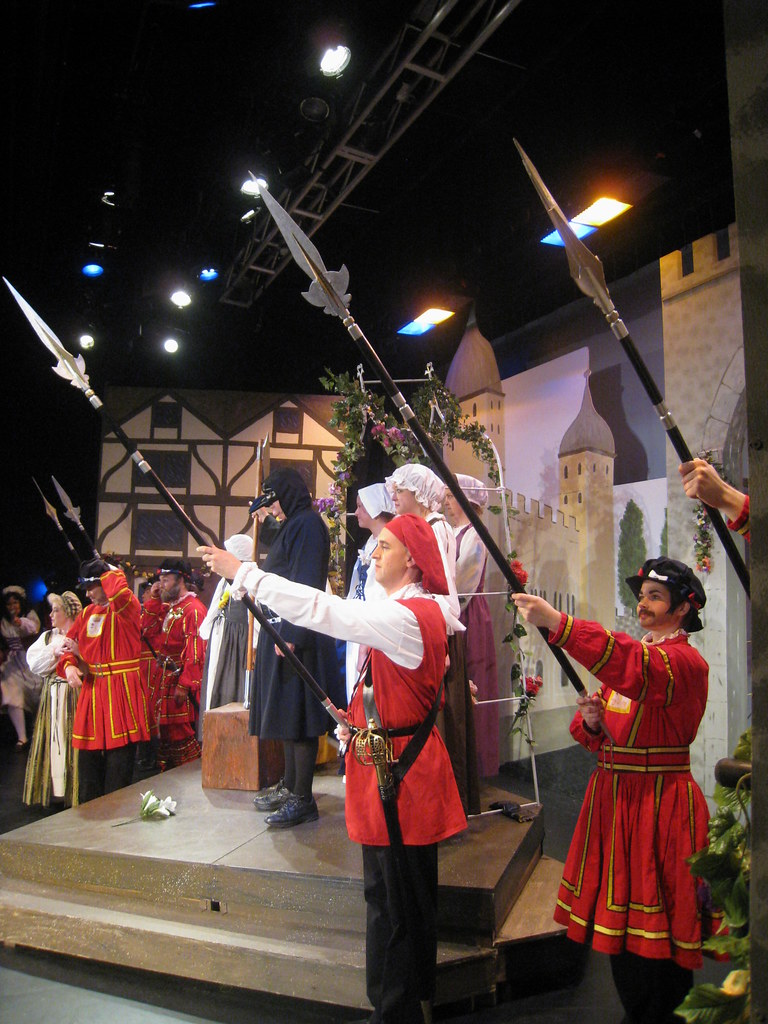 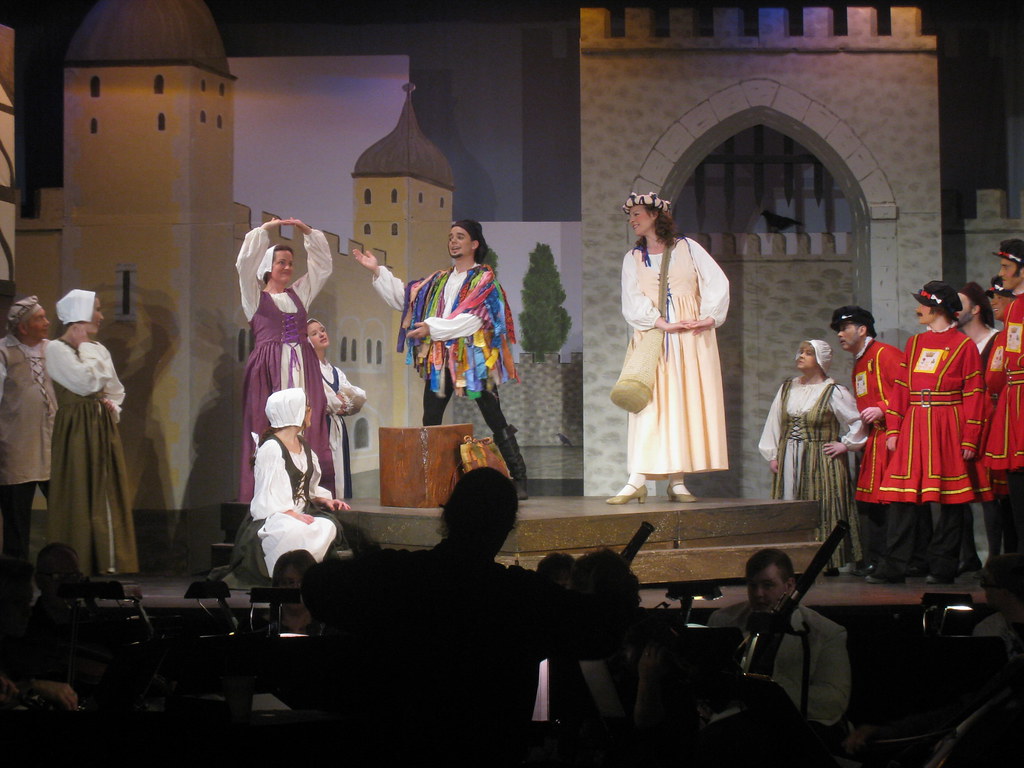 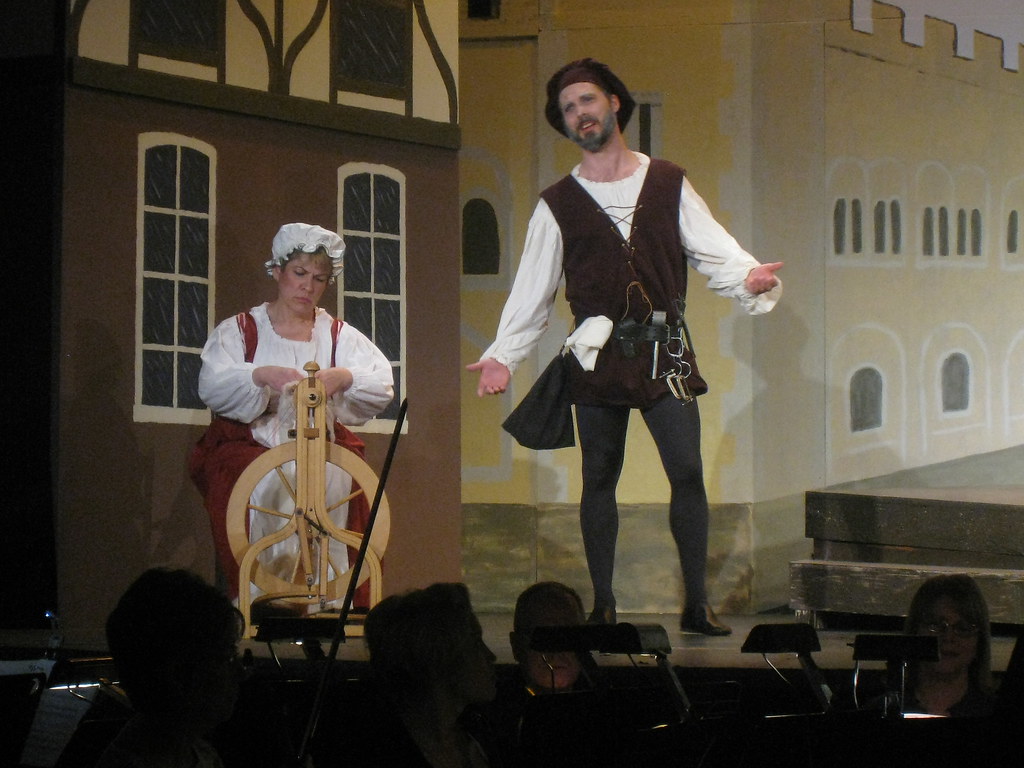 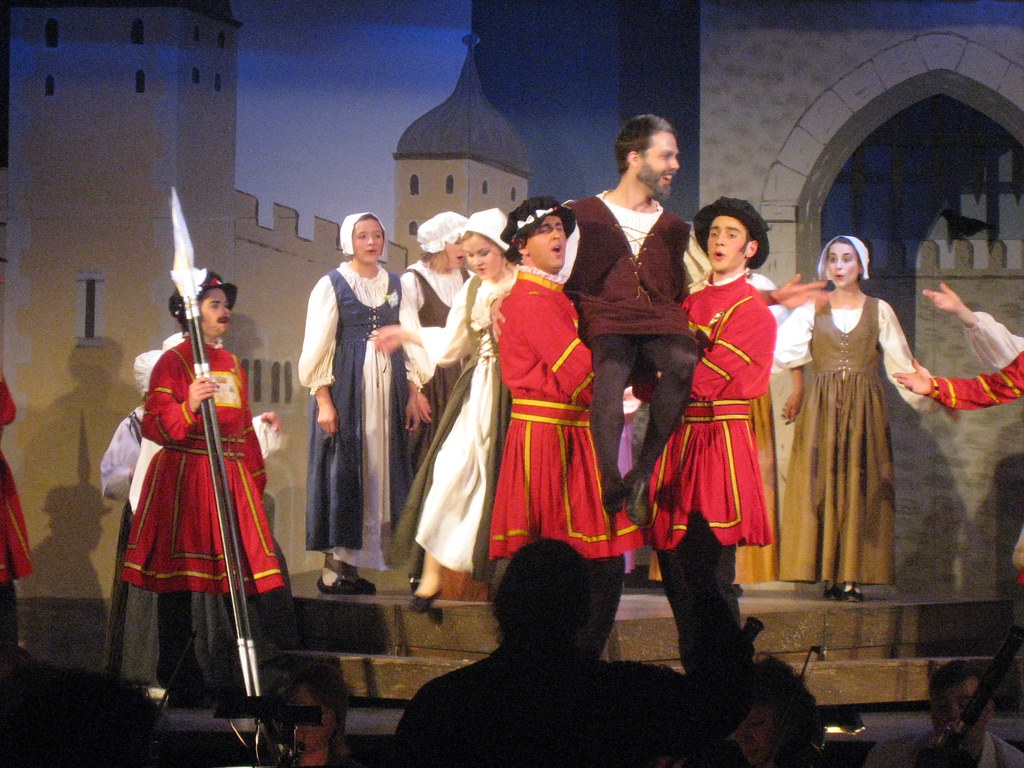 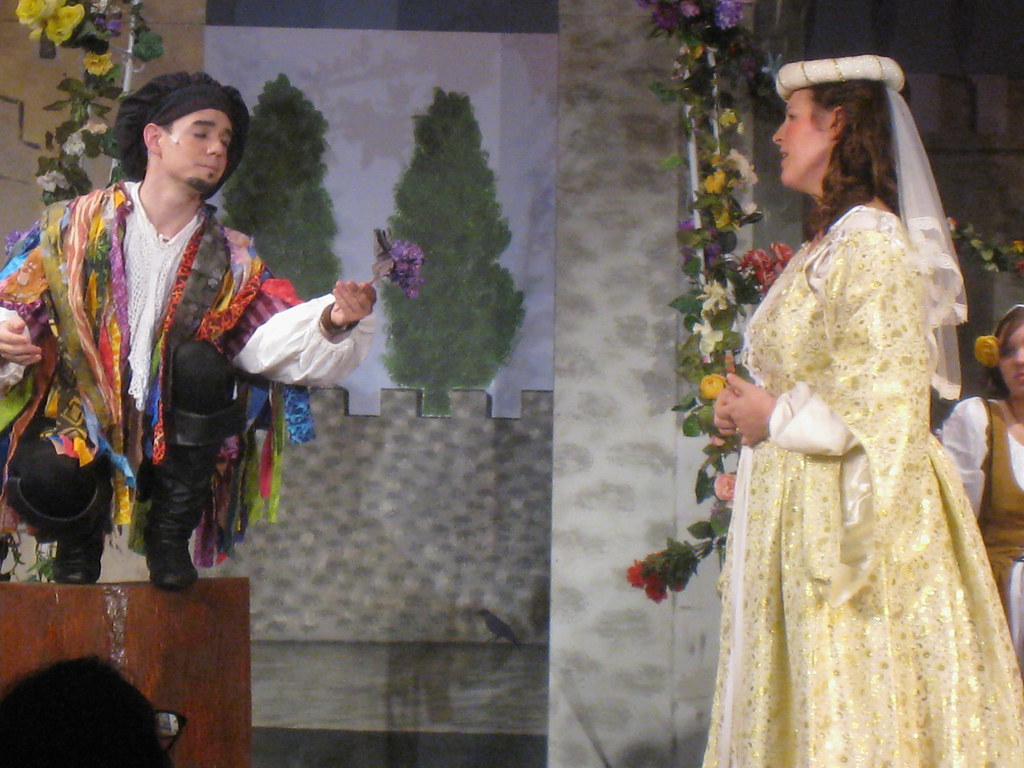 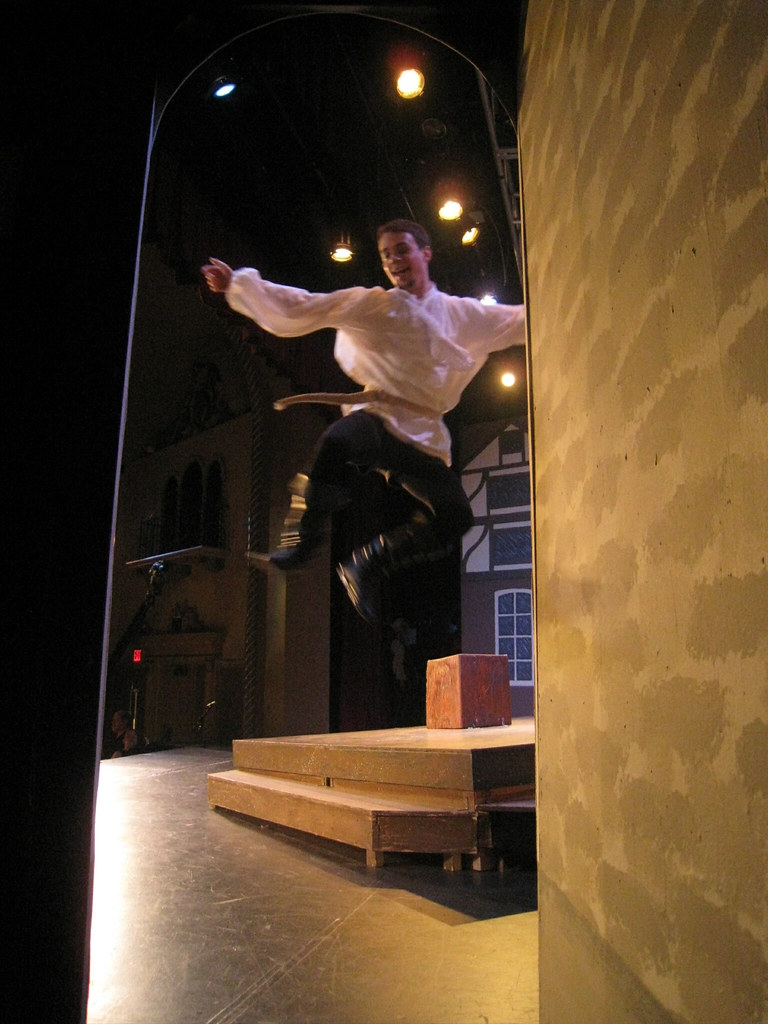 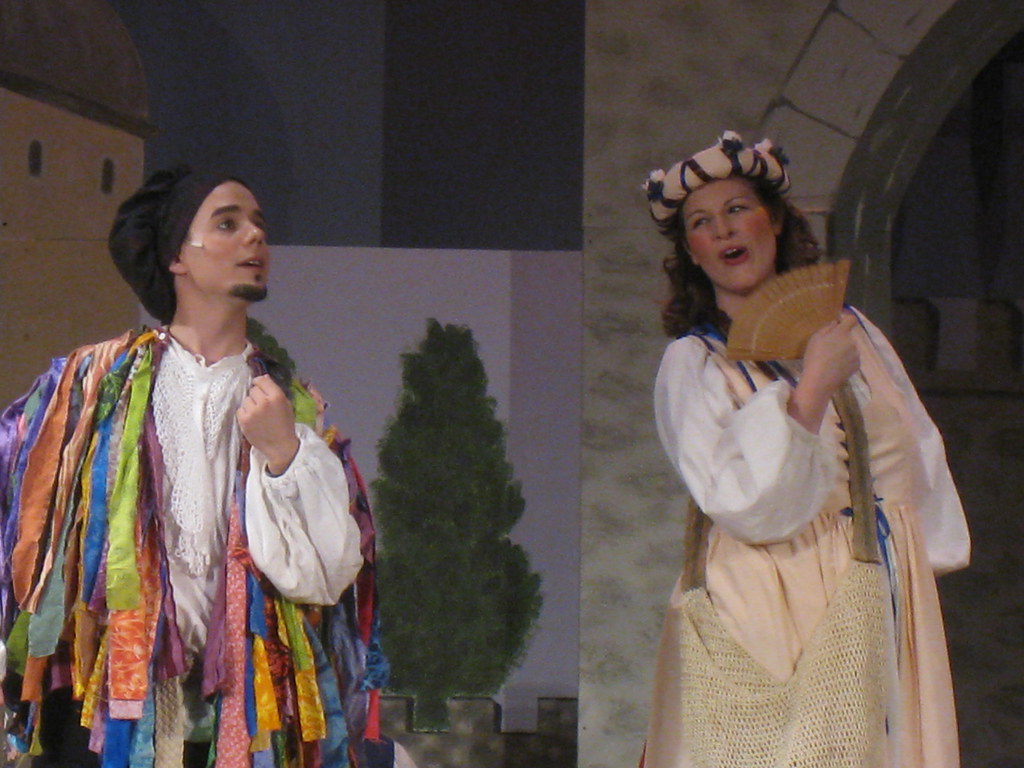 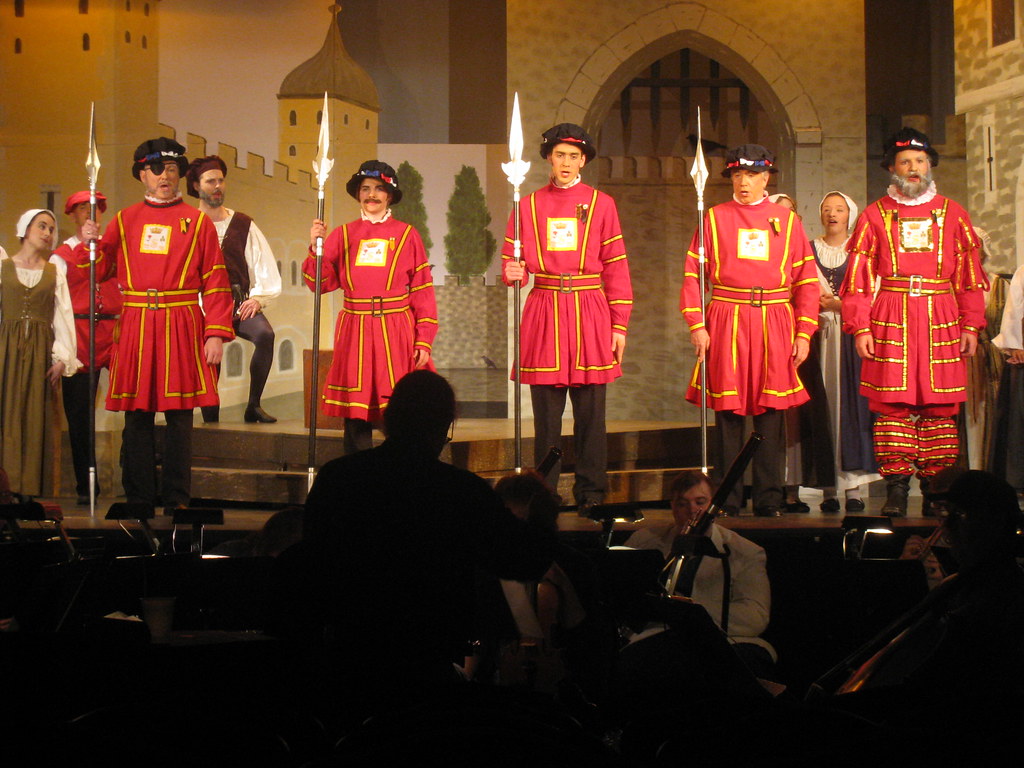 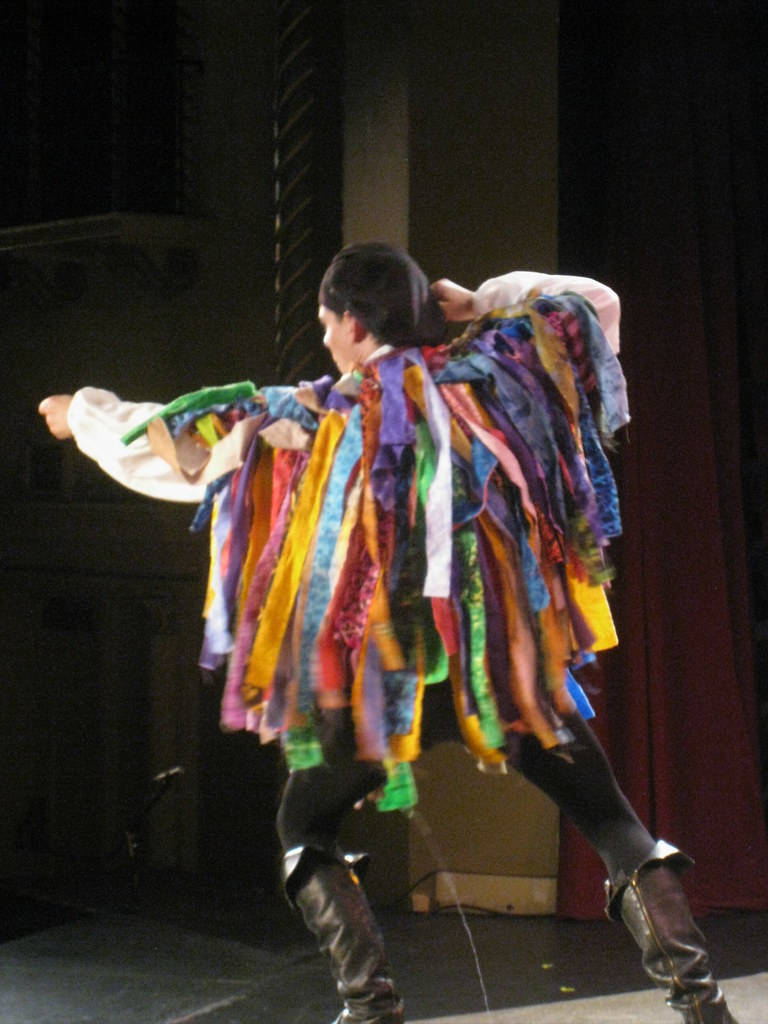 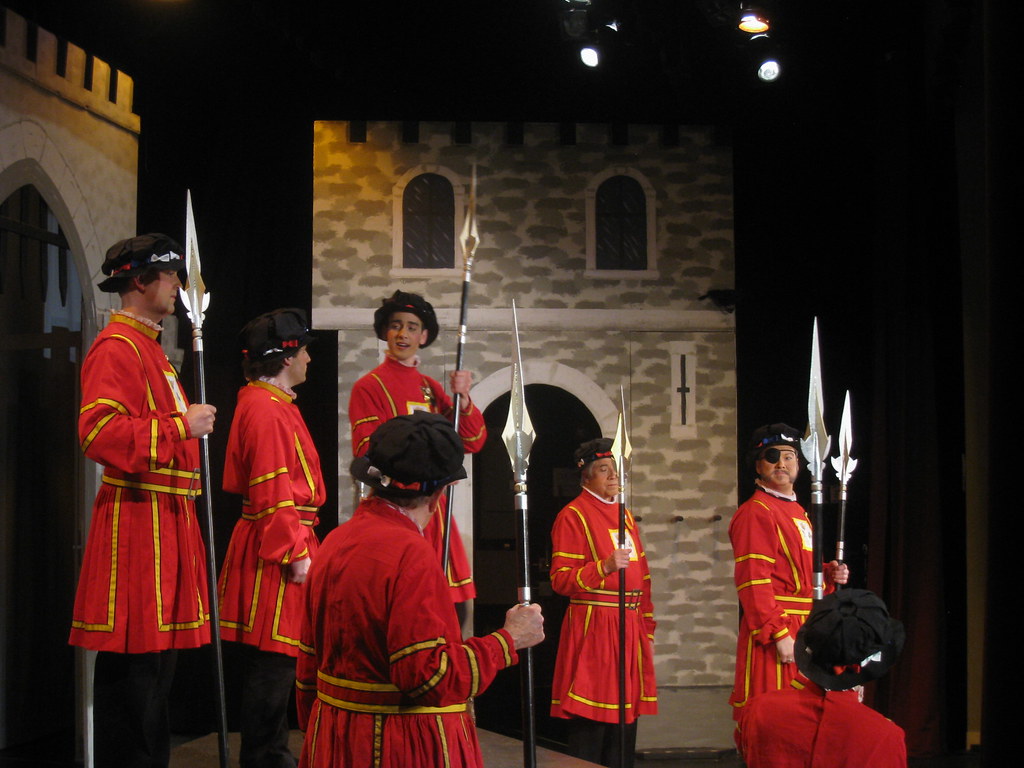 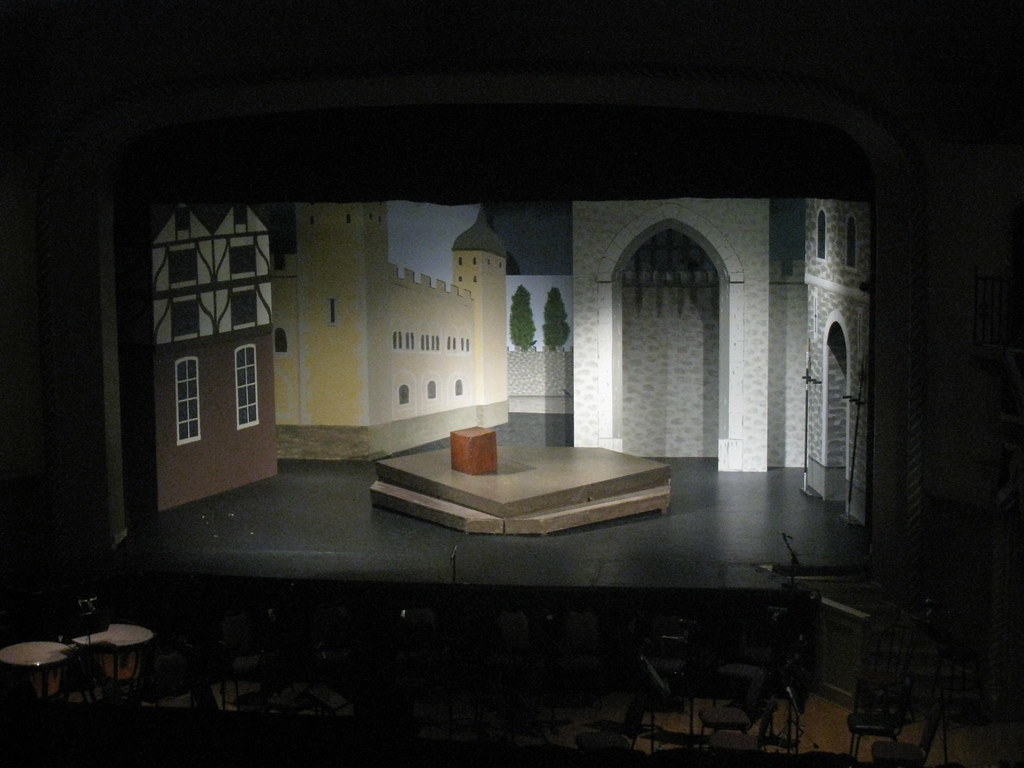 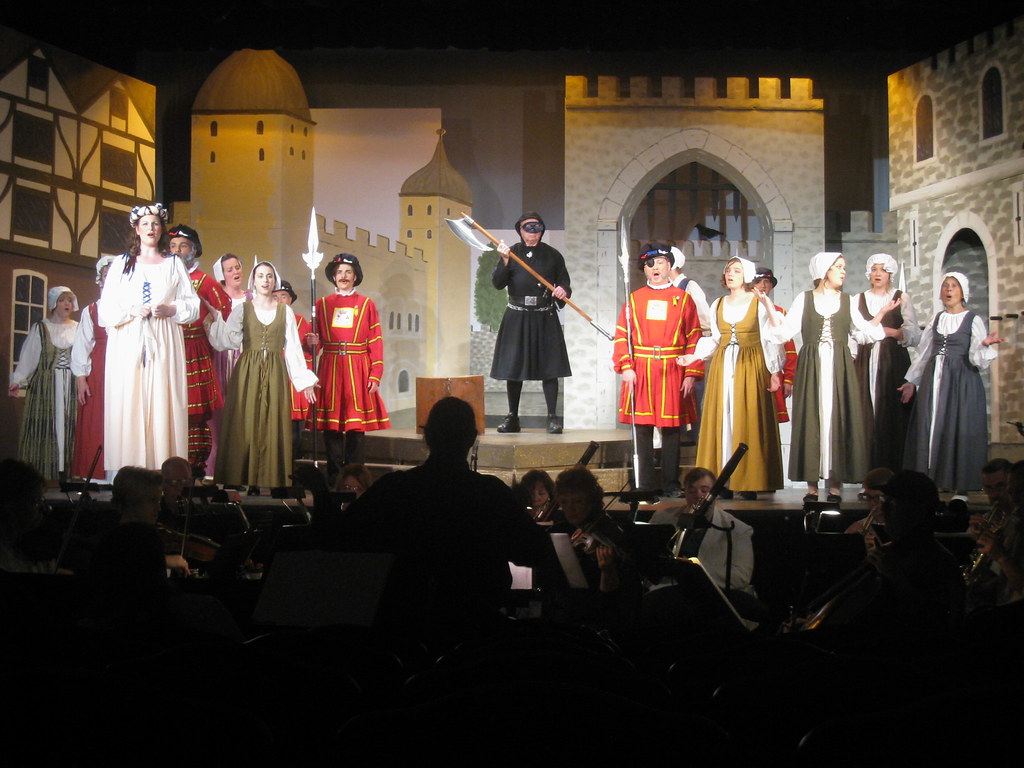 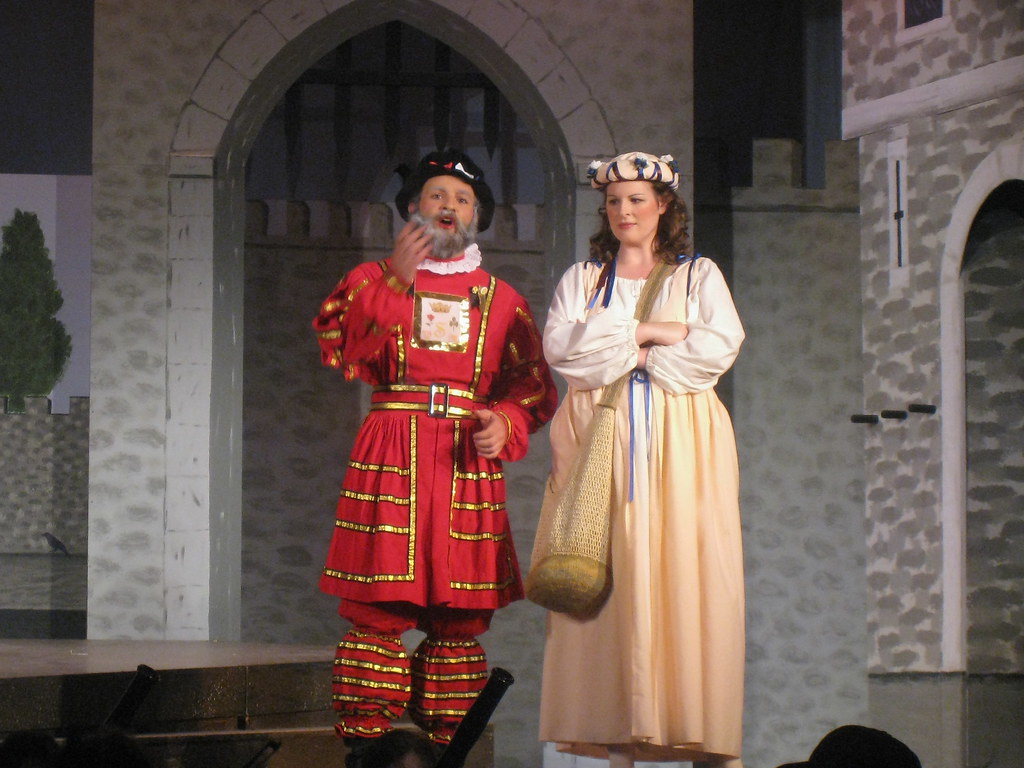 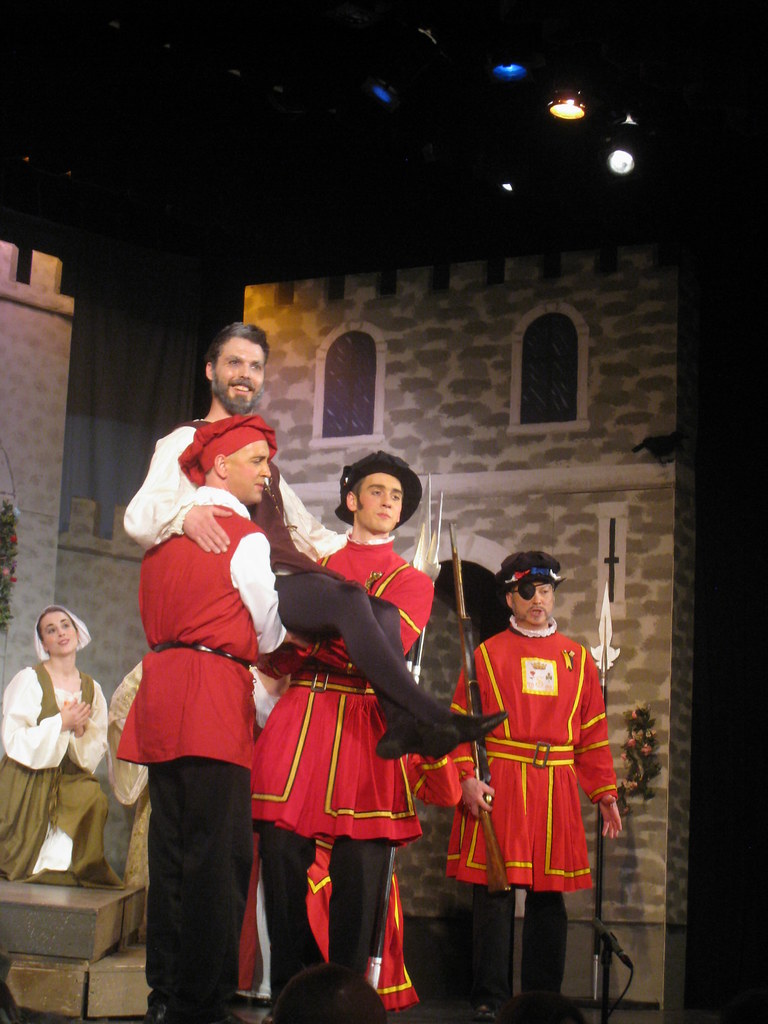 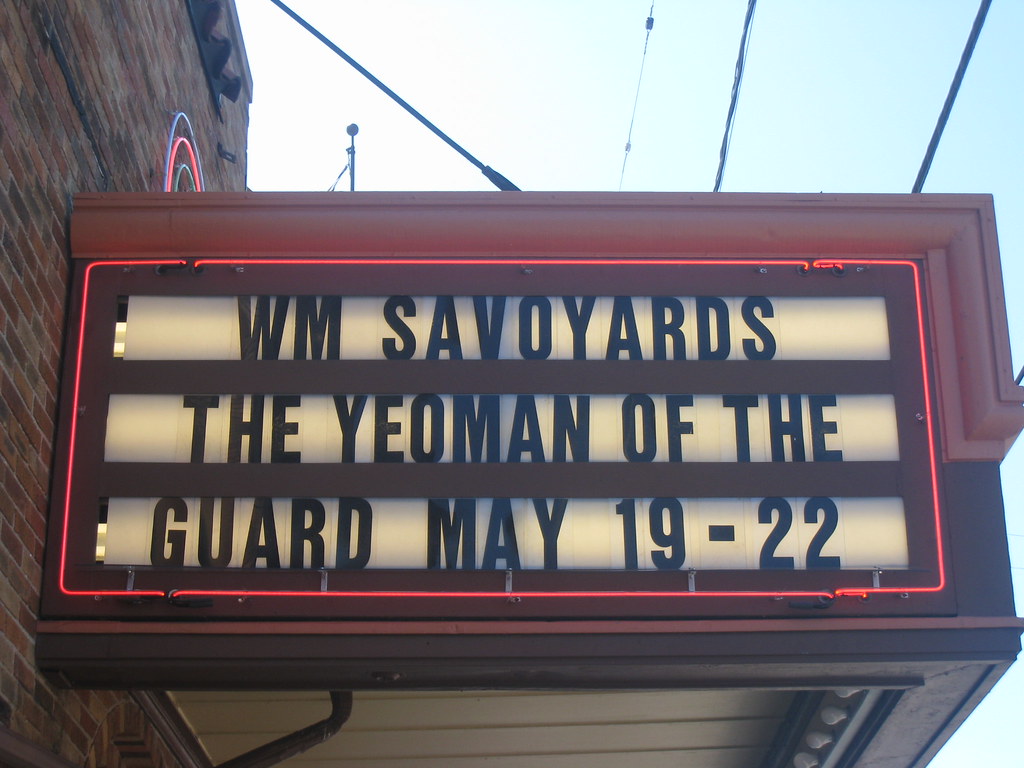 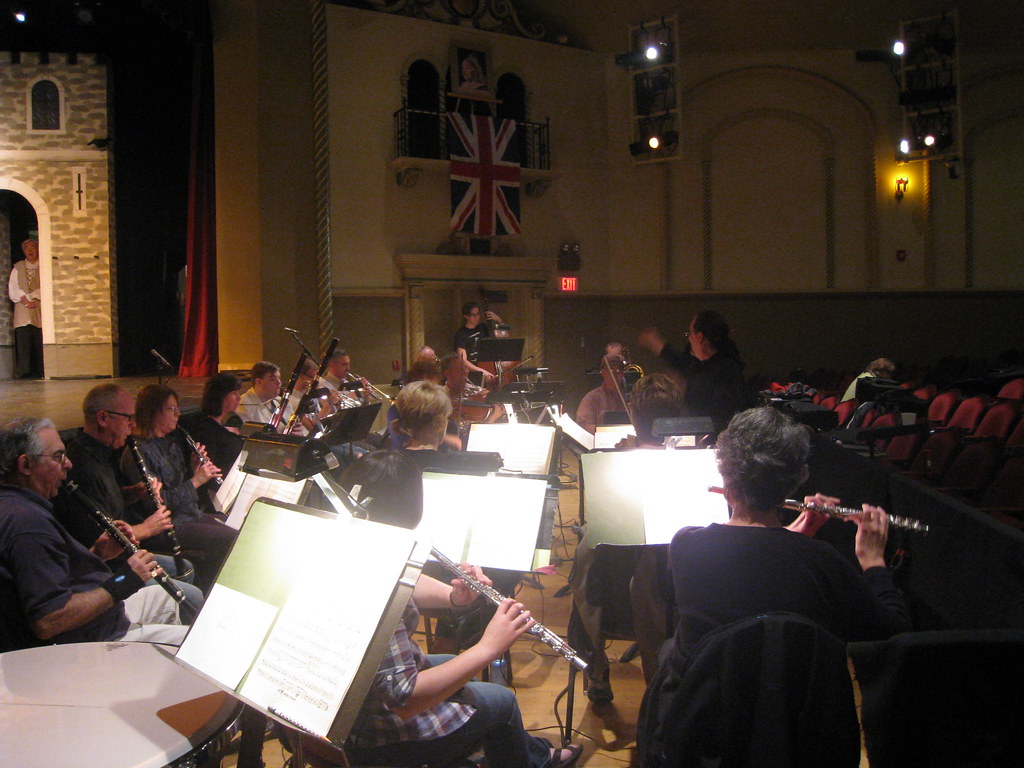 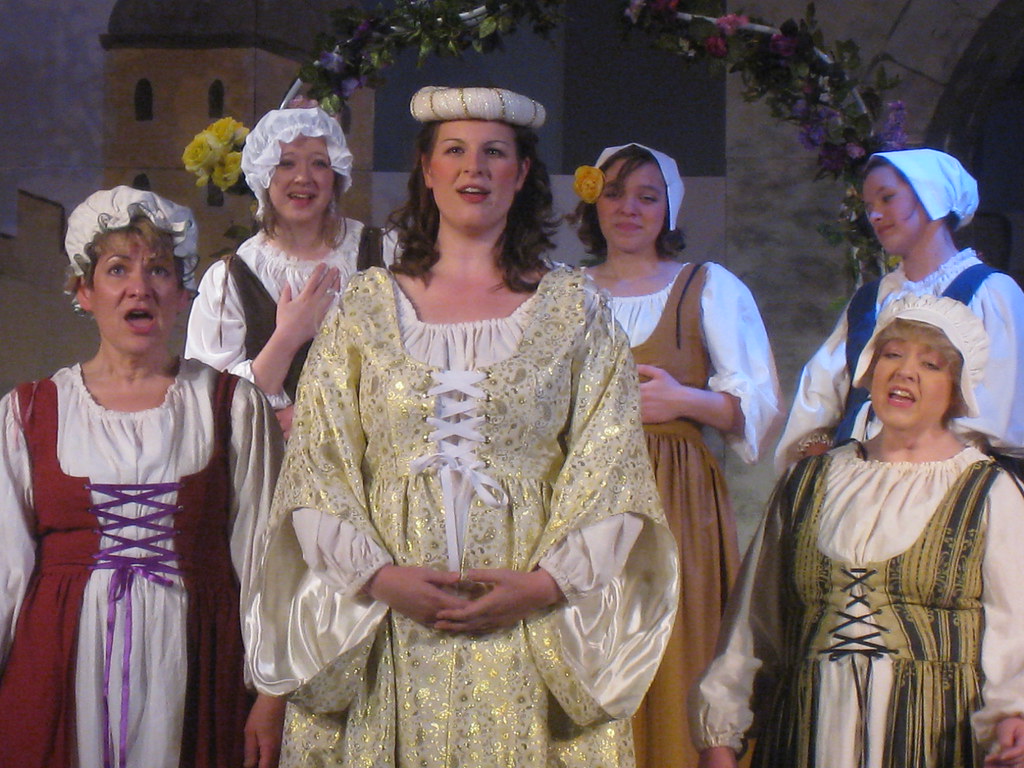 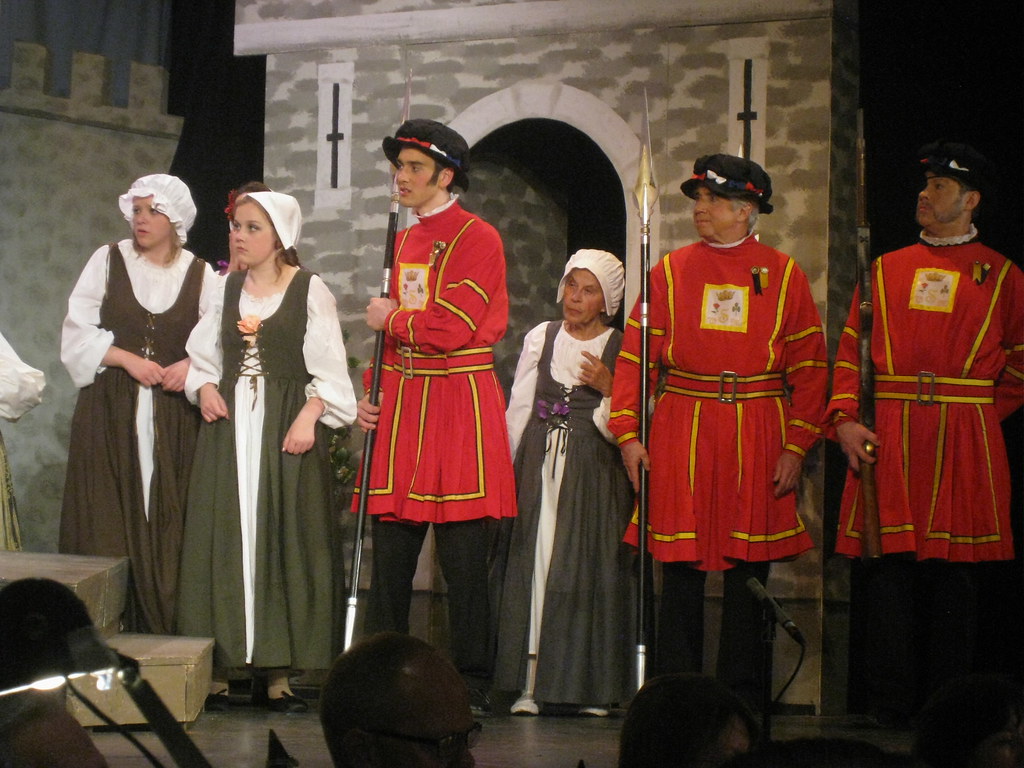 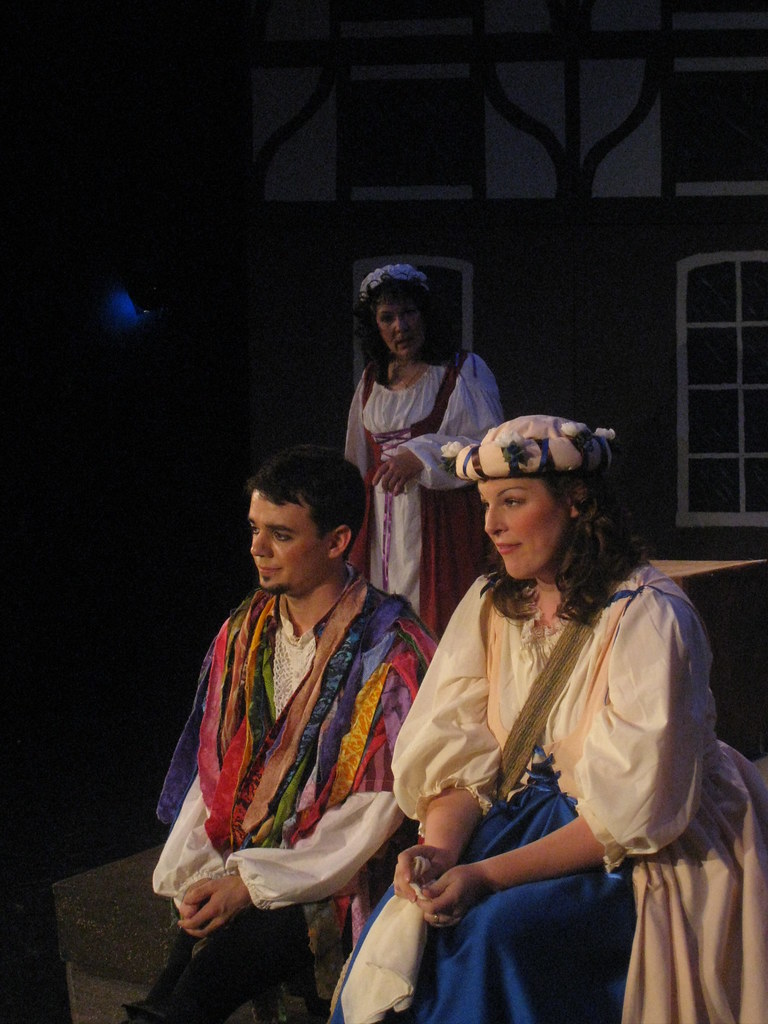 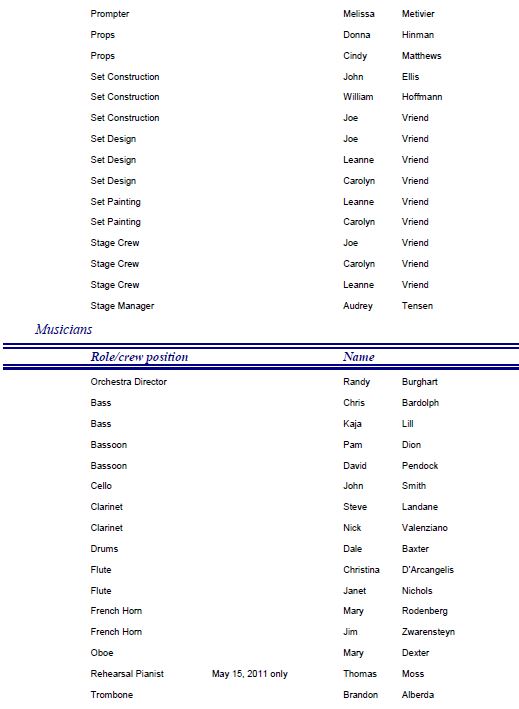 JACK POINT was a poor strolling player in the days of old Merrie England. With pretty Elsie Maynard he tramped through the towns and villages, and everywhere the two entertained the good folk with their songs and their dances, their quips and their cranks. Jack Point could have been no ordinary jester. Some years before he had been in the service of the Archbishop of Canterbury, and he mortally offended his Grace by his conundrum that the only difference between the two of them was that “whereas his Grace was paid £10,000 a year for being good, poor Jack Point was good – for nothing.” ” ‘Twas but a harmless jest,” the Merry-man sadly reflected, but the Archbishop had him whipped and put in the stocks as a rogue, and Jack Point was in no humour to “take a post again with the dignified clergy.”

Then began the vagabondage of the strolling player. Jack and Elsie made but a poor living, though they looked forward to the time when the smiles of fortune, the rewards of honest mirth, would allow them to marry. Certainly Jack Point had a pretty wit, and beneath the motley there beat a true heart of gold, too soon to be broken by tragedy. It was the old, old story of the jester who to the world’s eye was a merry and boisterous fellow, though in his inner being he was suffering all the while the tortures of anguish. But list ye now to the story’s unfolding!

The curtain rises on a faithful picture of the Tower of London, that picturesque and historic old fortress indissolubly connected with some of the brightest, and the darkest, annals of England. Soon we see the Yeomen of the Guard, clad in their traditional garb and carrying their halberds, and amongst them is old Sergeant Meryll. He has a daughter named Phoebe, whose heart and hand is being sought in vain by the grim and repulsive-looking Wilfred Shadbolt, who links the office of head jailor with the “assistant tormentorship.” It is part of this uncouth fellow’s duty to twist the thumbscrew and turn the rack to wring confessions from the prisoners. So far from Phoebe being attracted to Shadbolt, her thoughts are turned towards a young and handsome officer, Colonel Fairfax, who lies under sentence of death in the Tower by the evil designs of his kinsman, Sir Charles Poltwhistle, a Secretary of State. Fairfax has been condemned on a false charge of sorcery, though his cousin’s craft is really to secure the succession to his rich estate, which falls to him if he dies unmarried.

Some hopes linger that the soldier may yet be reprieved. Leonard Meryll, the old sergeant’s son, is coming from Windsor that day after the Court has honoured him for his valour in many martial adventures, and it is possible that he may bring with him the order that will save Colonel Fairfax. He does not bring the reprieve. Sergeant Meryll, whose life the condemned man has twice saved, and who would now readily give his own life for him, thereupon schemes a deception. Leonard’s future career is to be with the Yeomen of the Guard, but as his arrival is unknown, it is arranged that he shall hide himself for a while and his place be filled by the imprisoned Fairfax. Just after this the Colonel himself comes into view, under an escort commanded by the Lieutenant, and on his way to the Cold Harbour Tower “to await his end in solitude.” He treats death lightly – has he not a dozen times faced it in battle? – but he has one strange last request. Could he, as a means of thwarting his relative, be allowed to marry? The lady would be a bride but for an hour, and her legacy would be his dishonoured name and a hundred crowns, and “never was a marriage contracted with so little of evil to the contracting parties.” The Lieutenant, who admires the brave fellow, believes that the task of finding him a wife should be easy.

Now we meet Jack Point and Elsie Maynard. Not a little terrified, they are chased in by the crowd, who bid them “banish your timidity and with all rapidity give us quip and quiddity.” The choice of the wandering minstrels is their duet, “I have a song to sing, O!” Never was there a more enchanting ditty, and very significantly it tells of a merry-man’s love of a maid, and of the humble maid –

“Who loved a lord, and who laughed aloud,
At the moan of the merry-man, moping mum
Whose soul was sad, and whose glance was glum,
Who sipped no sup, and who craved no crumb,
As he sighed for the love of a ladye!”

Scarcely have the crowd finished applauding this offering than the Lieutenant enters, clears the rabble from the green, and inquires the history of Jack and Elsie. Jack tells him of their humble means of livelihood. Elsie is still unmarried, “for though I’m a fool,” quoths the jester, “there is a limit to my folly.” The Lieutenant then outlines his plan to make her a bride for an hour, and as the bargain seems a sound one and money is scarce, the two agree to the subterfuge, and Elsie is led into the Tower cell, blindfolded, to be wedded to Fairfax. Jack Point meanwhile tries on the officer some of his best conundrums and his incorrigible talent for repartee.

Shortly after this Phoebe takes the keys of the prison from Shadbolt, her “sour-faced admirer,” and Fairfax is thus restored to liberty in the guise of a Yeoman of the Guard. Fairfax, of course, is taken for Leonard and complimented on his successful campaigns. And then there tolls the bell of St. Peter’s. The crowd enter, the executioner’s block is brought on, and the masked headsman takes his place. But when the Yeomen go to to fetch the prisoner they find that the cell is empty, and that he has escaped. Shadbolt the jailer is arrested, and the people rush off in confusion, leaving Elsie insensible in the arms of her unknown husband, Fairfax. With this the curtain falls.

When it ascends once more on the same scene, the old housekeeper of the Tower, Dame Carruthers, chides the Yeomen on their failure both to keep and to re-capture Fairfax. Then Point and Shadbolt appear in very low spirits. For the Merry-man’s dolefulness there is ample cause, and he himself laments how ridiculous it is that “a poor heart-broken man must needs be merry or he will be whipped.” Shadbolt, envious of his companion’s gifts, confesses to a secret yearning of his own to follow the jester’s vocation, and the lugubrious fellow tells how deft and successful are his own delicate shafts of wit in the torture chamber and cells. Jack Point agrees, for a consideration, to teach Shadbolt “the rules that all family fools must observe if they love their profession.” The consideration is that the jailor must declare that he shot Fairfax with an arquebus at night as he was attempting to swim over the Thames. The bargain is struck, and in a short time a shot is heard, and the jailor re-enters to declare that the escaped prisoner has been shot and drowned in the river. Fairfax himself has been lamenting that, although free from his fetters grim, he is still bound for good and ill to an unknown bride, a situation that leads up to the first of those delightful quartettes, “Strange Adventure.” He meets Elsie, is attracted at once by her beauty, and learns the secret of her perplexity, though how can he proclaim his real self while he is still Leonard Meryll?

It is told us in a tuneful trio that “a man who would woo a fair maid should ‘prentice himself to the trade and study all day in methodical way how to flatter, cajole and persuade.” Certainly Fairfax knows these arts much better than Point. Before the jester’s eyes he begins to fascinate the girl with sweet words and tender caresses, and the utter disillusionment of poor Jack Point, a victim of the fickleness of womankind and outwitted in love, is reflected in that haunting number, “When a wooer goes a wooing.” Events now race towards their end – an end that to two at least has all the joyous warmth of romance, but to the one pathetic figure in his motley the blackness of despair. Leonard hastens in with the belated reprieve, and Elsie soon learns with happiness that the gallant Yeoman who has captured her heart is, in truth, her own strangely-wed husband, Fairfax. For her the hardship of the stroller’s life has passed. So also has it for the broken Merry-man. Sadly he kneels by the girl who has forsaken his arms for another’s, gently fondles and kisses the hem of her dress, bestows on her the sign of his blessing, and in the last tremor of grief falls at her feet – dead!